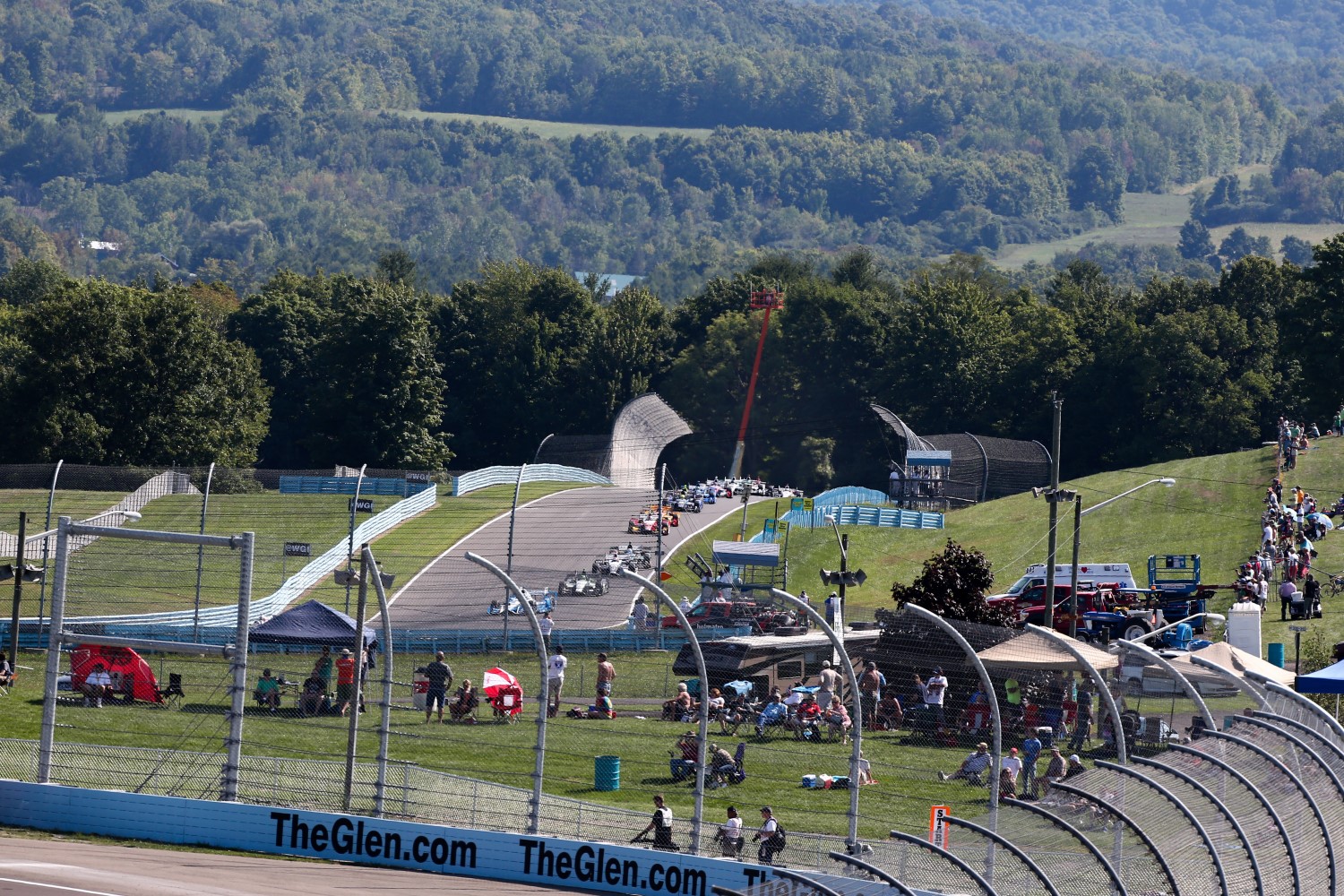 WATKINS GLEN, New York – As president of Watkins Glen International Michael Printup usually has a smile on his face as he talks about the historic facility that he runs. This past weekend Printup seemed to have a permanent smile, as he was ecstatic over the success of the first Verizon IndyCar Series race since July 4, 2010, writes Bruce Martin of IndyCar.com

Six years ago the Independence Day weekend simply did not work for open-wheel racing and the historic track made famous as the former home of the United States Grand Prix Formula One race from 1961 to 1980. The IndyCar Series contest back then drew 16,500 fans for the entire weekend. Out of that number in 2010 9,800 of those tickets were “corporate tickets."

This past weekend in the INDYCAR Grand Prix at The Glen, there were more spectators than that on Race Day.

“Because of the short notice of this race and the announcement coming on May 13 we came into the weekend thinking we would get 14,000 to 15,000 for the race and we would have been happy with that," Printup said. “But thanks to the glorious weather and the work of INDYCAR President Jay Frye, CEO Mark Miles and the entire INDYCAR staff we were upwards of 20,000 spectators for the race and over 45,000 fans for the three-day weekend."

The Watkins Glen race was a late addition to the 2016 Verizon IndyCar Series schedule after the proposed street race in Boston's Seaport District was canceled by its promoter over numerous governmental obstacles that simply could not be resolved. So INDYCAR and Watkins Glen International decided to join forces in a group effort where the sanctioning body helped promote and market the weekend along with Printup's staff at Watkins Glen International.

Because the event looked so promising, the agreement between INDYCAR and WGI was extended an additional two years and was announced recently at the New York State Fair with Governor Andrew Cuomo.

“The Governor of New York is a real car guy and when I told him INDYCAR was coming back to Watkins Glen back in May he wanted to be a part of it," Printup said. “That support has really helped because this time we want to be a permanent part of the Verizon IndyCar Series schedule."

All three days at Watkins Glen the skies were sunny and the weather crisp and beautiful. The campers arrived early and stayed late and the massive grandstands that are set up around the course had enthusiastic fans watching the stars and cars of the Verizon IndyCar Series go faster than ever before as eventual winner Scott Dixon won the pole by nearly six seconds a lap over the previous track record.

“It's been awesome," Printup said. “From WGI and our team and from Jay Frye and Stephen Starks (INDYCAR Vice President of Promoter Relations) and the INDYCAR team it's been a fantastic weekend. We all knew when we signed this deal in May we got right on the phones and started selling as fast as we could and did all kinds of special things to move some tickets 90 days is not a lot of time to promote a race. We were 30 days away from IMSA and 45 days from our Wine Festival and that draws 50,000 people. And of course, NASCAR was here a month ago. We knew that but we are not disappointed at all. The fans began to turn out on Thursday and we had about 10,000 fans here on Saturday."

INDYCAR and WGI redid the deal in about one hour to extend through the 2018 season, according to Printup. And with that security on the schedule it should help events such as WGI grow in the future.

“Being a huge Indy car fan that is the best thing I've seen INDYCAR do in years by putting the schedule together through 2018 like they did," Printup said. “It was awesome to see Gateway back on the schedule and Road America on this year's schedule. George Bruggenthies is here and what a great deal he put together. That confide)nce helps the sponsors, helps with TV and the fans now know what they are doing next Labor Day Weekend with the IndyCar Series returning."

The repaved racing surface has also improved its NASCAR weekend as the road courses have become the stock car series' version of the short tracks because of its action on the track. Watkins Glen was one of only two races that were sold out in NASCAR in 2016. The Daytona 500 was the other sold-out event.

The Labor Day Weekend worked out great compared to the Independence Day Weekend when many potential race fans go on weeklong vacations for the Fourth of July. By contrast, Labor Day Weekend has folks closer to home and the three-day weekend allows them a chance to travel within the region.

“We are lucky to have this partnership the way it is written with INDYCAR," Printup said.

The visual of high-speed Indy cars racing around the 11-turn, 3.37-mile road course at record speeds raised the hair on the back of Printup's neck.

“I took my son out to the Bus Stop on Saturday at the camera angle and it's amazing to see the cars twitch through that," Printup said. “Juan Pablo Montoya said the grip was incredible. Just like at the Indianapolis Motor Speedway, the people that designed this track put together a world-class track. This track was made for these cars.