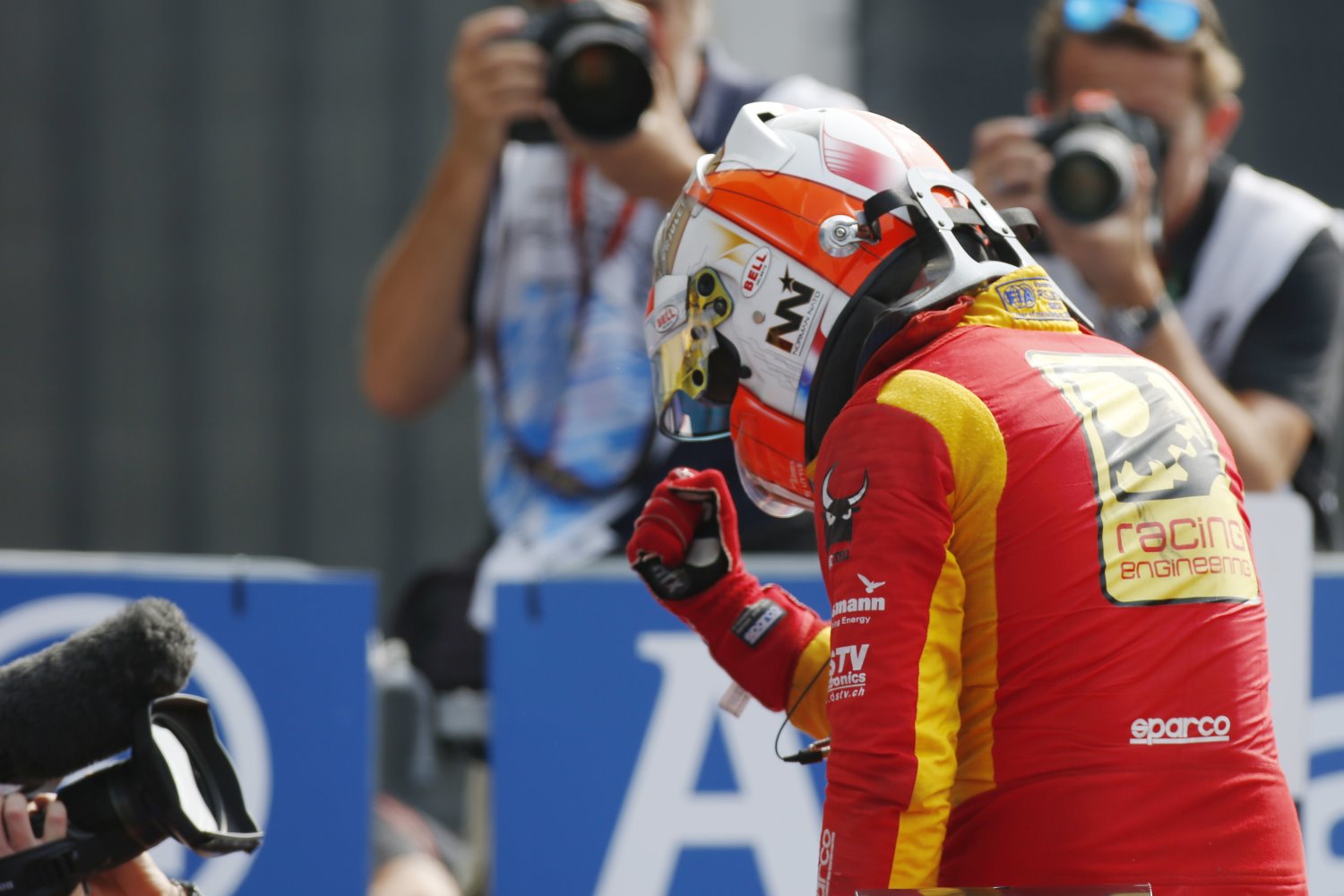 Norman Nato dominated this morning's Sprint Race in Monza, grabbing the lead with a storming start before building a lead which would not be touched for his second win of the season ahead of PREMA teammates Pierre Gasly and Antonio Giovinazzi.

When the lights went out poleman Mitch Evans had a poor getaway while Jordan King looked to have claimed the lead from P2, but his Racing Engineering teammate had other ideas: Nato eased up the inside into Turn 1 to steal the top spot, while behind them Luca Ghiotto was squeezed between Evans and a fast starting Gasly, with the Red Bull tester nabbing P3 ahead of his rivals.

The field headed for Della Roggia together, and it was soon clear that they were too close: Oliver Rowland tapped Ghiotto into a spin and retirement (picking up a 10 second penalty for the move), with Gustav Malja similarly pushing Evans out of the race (and picking up the same penalty) before also knocking an element off Giovinazzi's front wing as he looked to get away again, prompting a brief VSC period to remove the stricken cars.

When the race ran live again on lap 2 the order at the front was Nato from King, Gasly, Malja, Giovinazzi and Nobuharu Matsushita, with the Italian quickly taking revenge by claiming the Swede's scalp on lap 5. The PREMA pair were on their usual hot pace as Gasly hunted down King for lap after lap before striking on lap 9: the Frenchman went outside into Turn 1 to be inside for the chicane exit, before running side by side all the way to Della Roggia for the inside line and P2.

Further back Markelov was repeating his weekend long speed, making short work of mugging Matsushita for P6 and looking for more, as King slowly fell back into his rivals clutches: Giovinazzi eventually stole his podium on lap 17 at Turn 1. Malja was pushing the Briton all-round the track, finally getting side by side with him up to Della Roggia on the final lap before cutting the corner, handing a run to the Russian. Up front Nato, Gasly and Giovinazzi ran their own pace to fill the podium, while King just denied P4 to Markelov despite a lunge at the line. Malja's time penalty promoted Alex Lynn to 6th after mugging Matsushita on the line, while Nicholas Latifi grabbed the final point of the race.

Gasly rebuilt his lead in the drivers' standings over teammate Giovinazzi a little, leaving Monza with a lead of 174 points to 164, while Marciello remains third on 138 ahead of Sergey Sirotkin on 115 points, King on 112 and Nato on 107, while in the teams' standings PREMA Racing pulls further away from RUSSIAN TIME, 338 points to 224, ahead of Racing Engineering on 219 points and ART Grand Prix on 175 as thoughts turn to the penultimate round of the season in Malaysia.