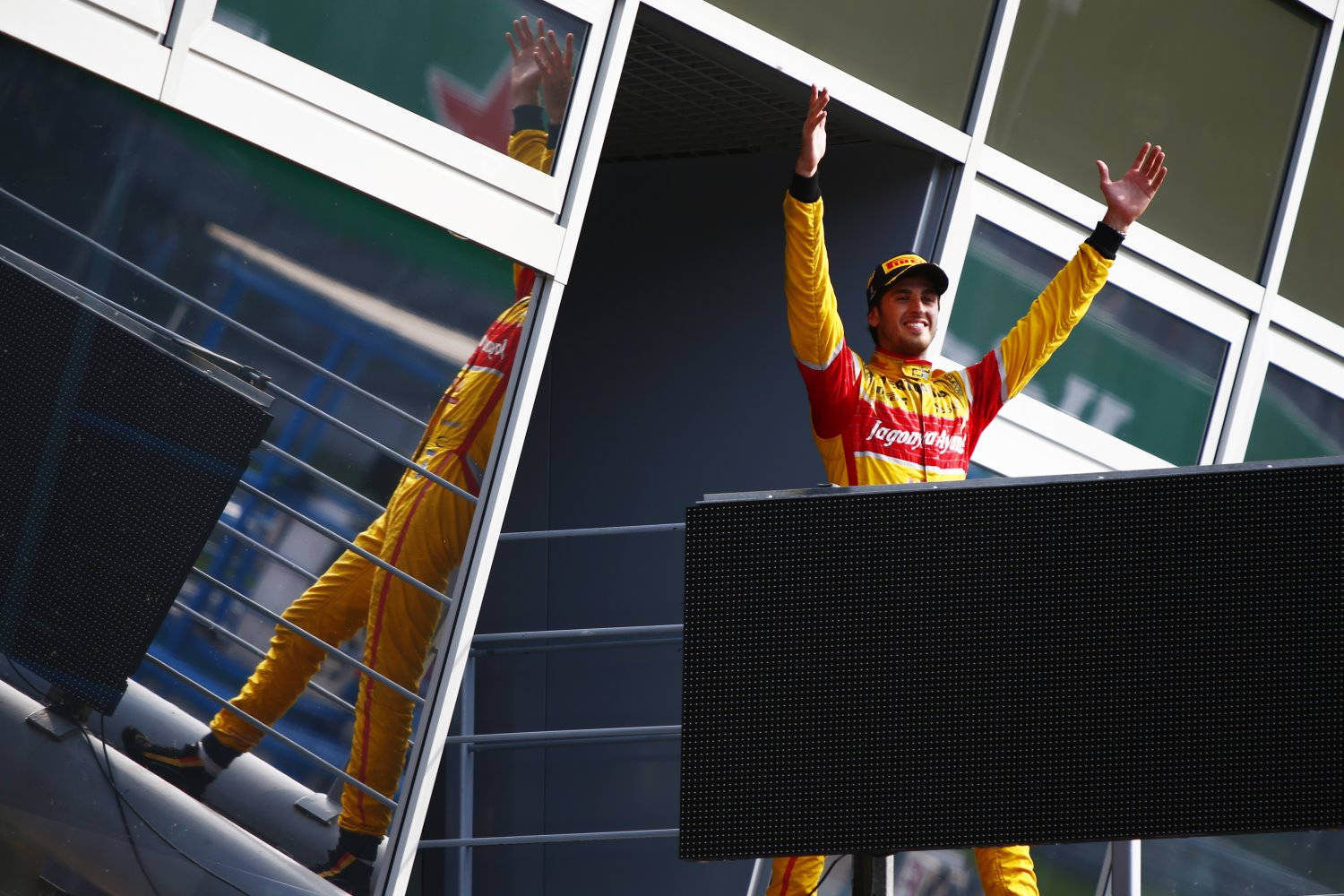 Antonio Giovinazzi delighted his home fans after passing countryman Raffaele Marciello on the final lap to win this afternoon's Feature Race at Monza, taking the top spot from the back of the grid by making the right tire call and gaining an advantage from a safety car mishap to lead home an Italian 1-2 ahead of Gustav Malja.

When the lights went out all eyes were on poleman Pierre Gasly, who eased away from the fight for P2 between Artem Markelov and Arthur Pic, which saw the Frenchman come off worse and cut the first chicane before returning ahead of the Russian, his countryman Sergey Sirotkin, teammates Jordan King and Norman Nato and local hero Luca Ghiotto, while behind them Giovinazzi only just avoided the stalled car of Sean Gelael before heading on his way once again.

Nato made short work of passing his teammate and Sirotkin to get a better view of the spat between Pic and Markelov, which saw the pair struggling with the first corner as their soft tyros wore down: Marciello and Giovinazzi started on the harder compound and were soon moving forward as their rivals pitted, with the latter easily slicing through his way through the field to close up to his countryman. Up front Gasly was able to easily pull away from his rivals even he had to observe the rules of physics as he finally pitted on lap 12, easily emerging ahead of his pitted rivals and around 20 seconds behind new race leader Marciello.

As the Red Bull man made inroads into the gap up to the front it became clear that the Italian would not be able to pit and return within the ever shrinking gap, but on lap 15 Pic tried to overtake Sergio Canamasas on the inside of Parabolica, with the pair coming together and the Spaniard pitched into a lurid roll: both drivers were out on the spot, and the safety car boards were shown immediately.

The top three on track (Marciello, Malja and Giovinazzi) still had to pit, and took the opportunity to come in as soon as possible: unfortunately for their rivals the safety car didn't stop in front of the trio as they reemerged but instead in front of Gasly, taking a few laps to deal with the stricken cars before waving the field through and taking up station in front of Marciello, who was able to save rubber on his new soft compounds for when it really mattered, the race restart and the closing laps.

The field took up position behind the trio for a lap 23 restart, and to add a degree of complication the lapped Gelael was between Giovinazzi and Gasly on track, giving the field someone else to overtake as the laps remaining rolled down to zero. Marciello controlled the restart despite pressure from Malja into the first chicane, and with two laps remaining Giovinazzi finally pushed past the Swede on the front straight for P2. With little to lose he then muscled his way by his countryman on the final lap, locked up enormously into the chicane but just held position before tearing away to win by 1.4 seconds at the flag, with Malja a fine third half a second back.

Behind them Gasly was gutted to have lost what looked to be his win, but held on despite enormous late pressure for P4. Behind him countryman Nato crossed the line side by side with Ghiotto, who made a last corner bid for glory but stayed 6th despite finishing with the same time as his rival, ahead of King and with Mitch Evans hanging on for P8 and tomorrow's pole despite a late charge from Oliver Rowland and Markelov, who had to make do with 9th and 10th respectively.

Gasly will at least have the comfort of maintaining the lead in the drivers' standings over teammate Giovinazzi, although the Italian has now closed the gap to 8 points, 162 to 154, ahead of Marciello on 138 points, Sirotkin on 115 and Rowland on 106 points ahead of tomorrow morning's Sprint Race.