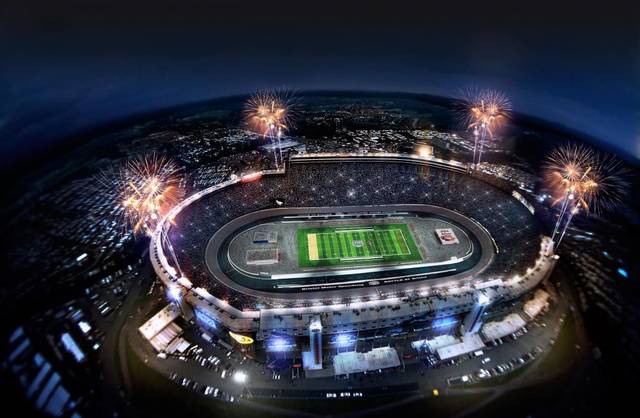 Bristol Motor Speedway – one of motorsports’ iconic venues – is days away from undergoing a complete transformation.

Minutes after the checkered flag falls at Saturday’s Bass Pro Shops NRA Night Race, work will start in earnest to make the track located in the mountains of Tennessee become the world’s largest football stadium for the Sept. 10 game between Tennessee and Virginia Tech (8 p.m., ABC).

Here is what you need to know about what’s happening as Bristol prepares for the Volunteers and Hokies:

Race fans have already seen the new scoreboard that has been in place above the infield since earlier this year. Called “Colossus," it’s the world’s largest outdoor center-hung, four-sided video screen/scoreboard. It weighs 700 tons and is suspended by cables attached to towers outside of the track.

The game will likely set a college football attendance record, with more than 150,000 tickets sold and grandstand tickets sold out. Notre Dame’s game at Michigan in 2013 has the current record of 115,109.

By Sept. 2, locker rooms will be constructed and the grooming and painting of the field will be complete. The speedway’s three campgrounds will also be readied for the game. On Sept. 4, the end zones will be painted.

This isn’t the first time a football game has been played at Bristol. In 1961, Washington and the Philadelphia Eagles played an NFL preseason game at the track.

“Making the transition in just 19 days will be tight, but we’re used to tackling big challenges. We know what it’s like to stretch and achieve these larger-than-life events, and I think when people see the field in September, it will look and feel very natural. Our first-time guests will never guess that the last time a football game was played here, JFK was president." – Bristol Motor Speedway general manager Jerry Caldwell.