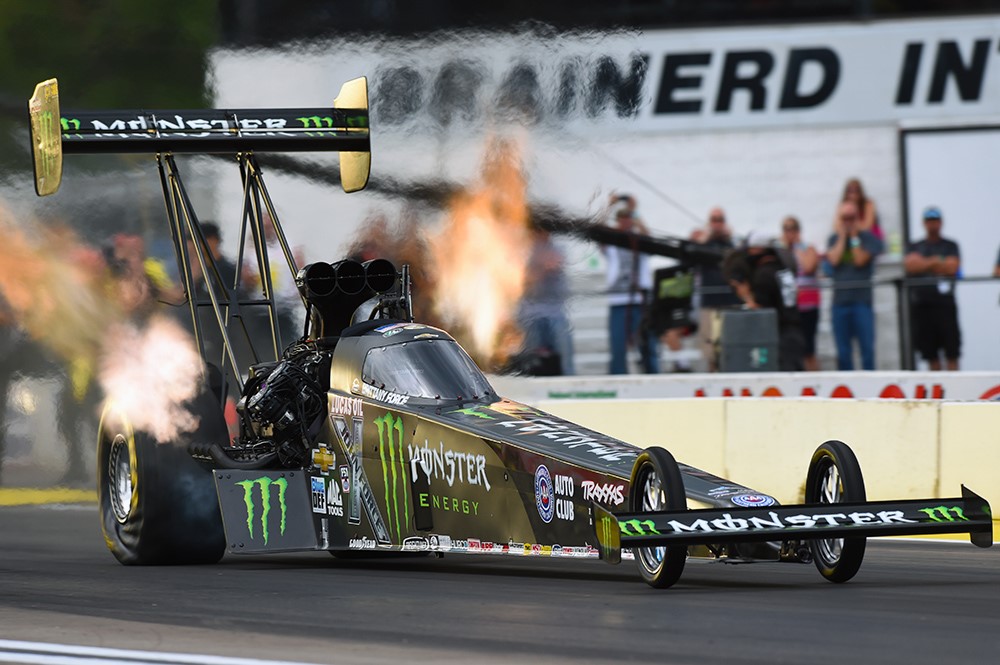 Worsham posted an elapsed time track record 3.856-second pass at 326.71 mph in his DHL Toyota Camry to take the lead through the first two sessions. If he stays No. 1 through the remaining two sessions on Saturday, he will tally his third consecutive top qualifier and fourth of the season. Worsham earned his first career No. 1 qualifier here in 1991 but has never won the event.

"We thought tonight we would run better than that, and we just missed it," said Worsham, who has clinched his spot in the Countdown to the Championship playoffs. "The track is very good, the grip is very good, and we just didn't have quite enough horsepower. It kind of got the best of us out there, but it was a great run. I thought we were going to run a 3.83, and putting down the kind of numbers we have been, everyone was looking for a little more."

Points leader Ron Capps is qualified second with a 3.866 at 324.98 in his NAPA Auto Parts Dodge Charger R/T. Capps is a five-time Brainerd winner.

Worsham and Capps will go head to head in the third qualifying session on Saturday to decide the Funny Car winner from the rain-delayed Protect the Harvest NHRA Northwest Nationals presented by Lucas Oil from two weeks ago in Seattle. FOX Sports 1 will cover the final-round matchup in a special 30-minute broadcast that will feature both the Funny Car and Top Fuel eliminations from Seattle. The added telecast will air from 3 to 3:30 p.m. ET.

Qualified third is Mopar Express Lane/Rocky Boots Dodge Charger R/T pilot Matt Hagan with a 3.882 at a Brainerd Int'l Raceway track record 330.47. Tommy Johnson Jr. is fourth, and Courtney Force, who made a quick recovery from a crash suffered in Seattle, is fifth.

Schumacher, an eight-time world champ, powered his U.S. Army dragster to the qualifying lead with a 3.712 at 323.50. Schumacher, the winningest Top Fuel driver in NHRA history and a three-time Brainerd winner, sprinted to his first No. 1 qualifier of the season two weeks ago in Seattle. He has 80 No. 1 qualifiers in his career and six in Brainerd.

"When I got out, I was really surprised," said Schumacher. "We were too early in the pack. There were too many good cars behind us, and I didn't think it was going to stick. Some people came close. We probably pushed some over the limit, which is always good when you run early. I was surprised it stuck. We're building, and we've been building for eight or nine races. We are getting better and better."

Steve Torrence is second in his Capco Contractors/Torrence Racing dragster with a 3.720 at 326.63. Torrence is having the best year of his career with two wins in four final rounds and eight No. 1 qualifiers. He is followed by two-time 2016 winner Shawn Langdon in third with a 3.723 at 323.58. Reigning world champ Antron Brown is fourth with a 3.749 at 321.58.

Torrence and Brown will also race in the third session to decide the Top Fuel title of the delayed Seattle event.

Pro Stock's Butner pushed his Jim Butner Auto Chevy Camaro to the top qualifying position with a 6.622 at 207.78. Butner, looking for the first win of his career, raced to the only two No. 1 qualifiers of his career earlier this year in Phoenix and Sonoma. He has raced to four runner-up finishes in 2016 and has secured his spot in the Countdown.

"I think it's definitely important [to get a jump on the competition], especially with the forecast," Butner said. "We were conservative first round. I had a great car out west and in Seattle, and we still have a good car. It's always good to be at the top on day one. We don't know what the weather will do, but I like starting No. 1."

Denver runner-up and Seattle finalist Vincent Nobile is second in his Mountain View Tire Chevy Camaro with a 6.628 at 207.69. Nobile raced to the final round two weekends ago in Seattle before rain delayed the event. He will race Aaron Strong in Indianapolis for the Seattle title.

Drew Skillman, the 2015 top rookie, drove to the third spot with a 6.640 at 208.23 at the controls of his Ray Skillman Auto Group Chevy Camaro. In fourth is points leader Jason line, and he is followed by Denver winner Allen Johnson. Three-time Brainerd winner Greg Anderson sits in sixth.

In Pro Stock Motorcycle, Louisiana's Sampey leads qualifying with a 6.848 at 194.94 on her Star Racing/Precision Service Equipment Buell. Sampey, who won earlier this season in Englishtown to claim her first win since 2007, was the No. 1 qualifier in Atlanta and has 46 in her career. She has clinched a spot in the Countdown and is the winningest female driver in NHRA history, yet she has never won in Brainerd.

"I'm not as happy as I should be with that .84 because my 1st-gear shifting was a little short again," Sampey said. "I don't know what's going on with that. I'm struggling and need to hold out that gear a little bit longer. We have more in store and are hoping to pull it out of it. I don't know what's going to happen with the weather tomorrow, but I'm keeping my fingers crossed that we can hold on to No. 1. I'm really hoping we can get a win here for a couple of reasons: I've never won it and would love to do it, and I have a lot of friends and family hurting back home with the devastation from the floods. I think bringing home a Wally to them would probably lift their spirits, and that would be the happiest I could be — to do that for them."

LE Tonglet, who won the most recent Pro Stock Motorcycle event in Sonoma, is in the second spot with a 6.877 at 194.94 on his Nitro Fish Racing Suzuki. Tonglet won this event in 2011. In third is Hector Arana Jr., who navigated the track on his Lucas Oil Buell in 6.894 at 192.88. Matt Smith is fourth and Hector Arana Sr. is fifth. Jerry Savoie, who is currently eighth, clinched his spot in the Countdown to the Championship during the first round of qualifying.

Qualifying at the Lucas Oil NHRA Nationals at Brainerd Int'l Raceway will resume Saturday with sessions at 1 and 3:30 p.m. and will set the stage for Sunday's 11 a.m. eliminations.