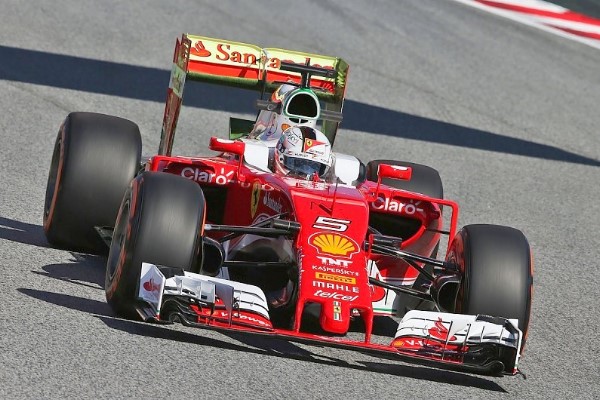 Ferrari a 'great disappointment' in 2016 – Webber
(GMM) Mark Webber does not think Mercedes' rivals are quite ready to pounce on the German team's dominance.

The Australian's former team, Red Bull, has sped past Ferrari in recent races, with Max Verstappen the only non-Mercedes driver in 2016 to have won a race.

"They're making ground on Mercedes," Webber, now a sports car driver for Porsche, told Germany's Auto Bild. "But I don't see that they have really caught up.

"They have a good race here and there, but Mercedes is usually still unbeatable," the 39-year-old added. "But Red Bull is ahead of Ferrari."

Indeed, Webber joined others in declaring Ferrari's showing in 2016 as a "great disappointment".

"Sebastian and Kimi are doing what they can," he said. "They're protecting the team a lot in the media, but inside they'll know that the team needs to get better.

"I think if every week they can make the most of their potential with penalties or strategy mistakes, it's frustrating for the drivers," said Webber.

Asked if his old teammate Sebastian Vettel has the ability to push Ferrari forwards, Webber answered: "There's no doubt he can. But he needs the right people and I'm not sure if they have them at the moment.

"Ferrari is under constant media pressure, always needing to deliver. You can see with Sebastian that it can be frustrating, but his experience will help him."

Meanwhile, another of Webber's former teammates, Nico Rosberg, has been passed in the championship battle by the other Mercedes driver Lewis Hamilton.

Asked what the German needs to do now, Webber answered: "Fight like a stray dog! It's a very long season, so he needs to divide his energy and strike with Lewis has another tricky moment."

Belgium Grand Prix Officials Boosting Security As Race Nears Sell-Out
Belgium, like France, is "a country that has been targeted by terrorism in recent years," and with the Belgian Grand Prix looming "this means additional security," according to Olivier Ferret of NEXTGEN AUTO.

The additional security measures are in part because of the news that the race, scheduled for Aug. 26-28, "will be close to a sell-out."

Race Promoter Andre Maes said, "We are 25 percent ahead of this time last year. All of the stands are sold out. There are only general admission tickets available."

The race, to take place at the Circuit of Spa-Francorchamps, is benefiting from the "Max Verstappen effect," the Belgian-Dutch Red Bull driver is expected to draw "between 15,000 and 20,000 Dutch supporters," according to Maes.

Maes: "Like all big events that draw tens of thousands of people, we were given strict guidelines related to the level three alert and the recent unfortunate events in our country. Following what happened in Nice, we must separate pedestrian zones and vehicle traffic.

We have engaged a number of additional officials to inspect bags and body searches, if deemed necessary. We have also received the backing from the army to assure maximum security for the site." Arrests were recently made over "an attempted attack at the Singapore Grand Prix."

Maes added, "For us, security is the priority. The public can come without fear." NEXTGEN AUTO

Video: Red Bull simulator challenge: Adrian Newey
Introducing the Red Bull Simulator Challenge where a series of famous faces battle it out for the quickest lap time on the Factory simulator. First up, it's Adrian Newey. Can he take it to the track as well as he takes it to the drawing board?

Gutierrez getting 'bored' of finishing 11th
Haas driver Esteban Gutierrez says that he is starting to get "bored" of finishing Formula 1 races in 11th position, after failing to claim a point over the first half of the season.

Gutierrez crossed the line 11th for the fourth time in 2016 at the most recent German Grand Prix, as an alternate two-stop strategy again narrowly failed to yield any reward.

Haas holds eighth in the standings courtesy of Romain Grosjean's 28-point haul from results in Australia, Bahrain, Russia and Austria, and Gutierrez is eager to add to the tally.

"It's starting to get boring to finish in 11th position," said Gutierrez.

"[In Germany] we did the best we could, we were very aggressive with the strategy, which was tough at the beginning, as the difference from Soft to Super Soft was much more than expected.

"I also had too much wheelspin at the start and a lot of cars went by, which was not easy, but we started to recover very quickly with very good pace, fighting all the way to the end."

Gutierrez is optimistic that opportunities will arise during the second half.

"It has been better and better for me every race, less problems, more consistency," he said.

"It's not nice to finish races too many times in 11th position, but I'm convinced that I will get my chances [in coming races], as there's still half of the season left and I know what I'm capable of.

"Finishing in front of my team-mate is the first goal, but it's not enough for me."

Gutierrez took his only F1 points to date with Sauber in Japan in 2013, placing seventh.