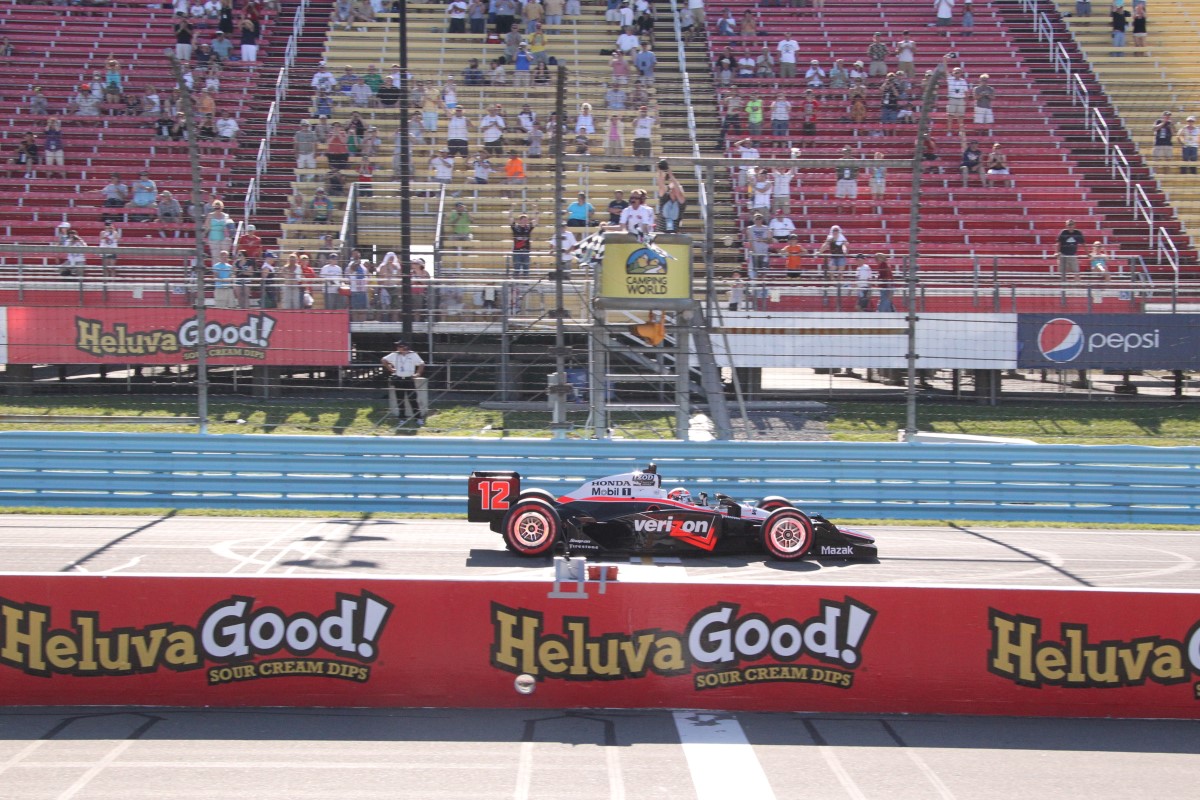 With most of the Verizon IndyCar Series drivers at Watkins Glen International, Thursday's test session felt more like opening practice on race weekend. The only difference is drivers will have to wait a few weeks to get the show back on the road.

The session included a mix of veterans who have experienced the twists and turns of WGI's 3.4-mile course and others who have never competed at the track. With six years passed since IndyCar's last race at Watkins Glen, all of them had a lot to learn Thursday.

"So many things were different than when we came here last that you can’t pinpoint one thing," said Tony Kanaan, one of four Chip Ganassi Racing drivers who participated in the all-day test. “Aero kits (for the cars), it’s a huge thing. Carbon brakes are a plus and new asphalt, it’s another plus. To be honest, you have the best of everything. It’s not even fair to compare it (to 2010). It’s crazy."

Watkins Glen hosted the IndyCar Series each year from 2005 to 2010. Kanaan said whatever advantage there was for drivers who competed back then was erased with the full course repave completed in the spring, to which Team Penske's Simon Pagenaud responded with a laugh, "Good." "They took a few laps to learn the track," Kanaan said of the newcomers. "I took a few laps to relearn the track because it was so much different than the past. This morning I went out for three or four laps and, like I said, the first three laps were like, ‘OK.’ All my braking zones and everything were completely different than in the past.

The IndyCar Grand Prix at The Glen was added to this year's schedule in May after the Grand Prix of Boston was canceled. Watkins Glen will be the penultimate race of the season, which means there's a chance the season title could be decided there.

“It’s definitely going to be a very important part of the Verizon IndyCar Series championship, being one race from the last," said Pagenaud, who has four wins this season and leads the points standings. “So obviously it’s important to get everything right."

“It’s definitely a very high-commitment racetrack. I’d never been here before. It’s quite impressive to come here and see how far we can push the IndyCars around here. It’s definitely next level to everything we do in the year."

Pagenaud participated in a tire test at Watkins Glen on June 20 that included five series regulars and four teams. The series’ return Thursday featured about 20 IndyCar drivers and four drivers from the second-tier Indy Lights Series, which will also hold a race during the weekend.

Testing started at 9 a.m. and went into the afternoon on a 90-plus degree day, with cars continuing to test after rain began to fall around 3 p.m. Drivers took a break of about an hour before the afternoon session.

“It’s great to be back in Watkins Glen," said Andretti Autosport's Ryan Hunter-Reay, who earned the first of his 14 career wins at Watkins Glen in 2008. “This is such an amazing racetrack, the area. We really missed it over the years not being here."

Said James Hinchcliffe: “The racetrack is pretty phenomenal in a lot of ways. The repave has given us a ton of grip. It’s nice to be on a smooth racetrack. We’ve been on a lot of bumpy racetracks lately, but (Watkins Glen is) billiard-table smooth."

Speeds for last weekend’s NASCAR’s Sprint Cup Series Cheez-It 355 at The Glen were held back by a hard Goodyear tire designed to last on the new surface. IndyCar drivers said Thursday they like the tire Firestone is bringing to Watkins Glen, where Ryan Briscoe’s 2009 track qualifying record of 1 minute, 28.1322 seconds will be in serious jeopardy.

“It is super fast right now in these IndyCars," Hunter-Reay said. “We’re doing lap times well below anything that’s been accomplished here. It’s going to be interesting for qualifying and the race, trying to get everything out of it. It’s super fast and behind the wheel of an IndyCar, it doesn’t get much better than this."

“It’s impressive," he said. “The speeds these cars are doing are pretty crazy. I can tell the margin of error is going to be pretty slim, without a doubt. It’s really quick around here from what I can see."

Although Watkins Glen was added back to the series’ schedule for only this year, Hunter-Reay said he would like to see it return to its permanent spot on the calendar.

“This race was announced a bit late, so the fans only have so much time to react to that and make full weekend plans. It’s tough to do," he said.

"We’re not expecting a home run the first year because of the circumstances, but hopefully over the years we can make it work. One thing’s for sure is we’ve got a great on-track product, a great show, that we can put on. Hopefully this will be a place we come for many years." Star Gazette

With the Verizon IndyCar Series championship still hanging in the balance, every opportunity to secure an advantage is crucial. That's why nearly the entire field tested today at Watkins Glen International, site of the penultimate race on the 2016 schedule.

Will Power set the pace in the latest IndyCar test at Watkins Glen ahead of the category’s racing return to the venue next month.

The Team Penske driver put down a 1:25.31s best before rain brought an early end to proceedings – 3 seconds under the lap record.

Championship leader Simon Pagenaud was among five drivers who tested at WGI on June 20, but the Team Penske driver realized the importance of coming back today ahead of the INDYCAR Grand Prix at The Glen weekend Sept. 2-4.

"It's important to come here and get the car ready for the race, for sure," said Pagenaud, flying the bright yellow No. 22 Menards Chevrolet colors he'll drive in the Watkins Glen race. "It's definitely going to be a very important part of the Verizon IndyCar Series championship. It's the race right before the last, so obviously it's important to get everything right."

Pagenaud leads teammate Will Power by 58 points after 12 of 16 completed races. Another Team Penske driver, Helio Castroneves, is in third place, 111 points out of the lead. Following the Penske trio are Ed Carpenter Racing's Josef Newgarden (120 behind) and Chip Ganassi Racing's Scott Dixon and Tony Kanaan (each 127 behind).

Kanaan was among the testers today, his first trip to The Glen since the Verizon IndyCar Series last raced there in 2010. The circuit was repaved earlier this year, but even the 19-year Indy car veteran was surprised with the added grip.

"It's nice to be back here," said Kanaan, the driver of the No. 10 NTT Data Chevrolet. "Scott had tested here a few weeks ago and told me it was fast, and I think I didn't believe him as much as it was. Really impressive. The last time I was here was with the old car, so now it's much faster and the track is very smooth, so it's nice. It feels good."

Unofficial reports from the June test had drivers turning laps several seconds faster than the track record of 1 minute, 28.1322 seconds set in 2009. That trend was expected to continue today, though midday showers did interrupt testing.

James Hinchcliffe, in the No. 5 Arrow Schmidt Peterson Motorsports Honda, was among the five who tested in June and the 20 today. The 29-year-old Canadian said the smooth, high-grip surface tests a driver's bravado through high-speed corners.

"It's nice to be on a smooth racetrack; we've been on a lot of bumpy racetracks lately," Hinchcliffe said. "It's billiard-table smooth, tons of grip. It's a massive commitment racetrack at the moment.

"Hopefully we can compete. Honda has been pushing pretty hard and the No. 5 car is coming off a couple of strong results in a row, so hopefully we can keep that momentum going."

Jones, currently second in the Indy Lights championship, spent the morning in the No. 15 Rahal Letterman Lanigan Honda before Graham Rahal took over in the afternoon. Stoneman, third in Indy Lights points, drove Ryan Hunter Reay's No. 28 DHL Honda, while Blackstock was in Marco Andretti's No. 27 United Fiber & Data Honda (pictured above) and Kellett turned laps in the No. 26 Honda of Carlos Munoz. Indy Lights veterans Gabby Chaves (the 2014 series champion before moving up to the Verizon IndyCar Series) and Zach Veach (a four-time Indy Lights race winner) participated in a Cooper Tires oval test Wednesday at Indianapolis Motor Speedway to help confirm the tire specification for the 2017 Freedom 100.

Chaves and Veach each drove Belardi Auto Racing Dallara IL-15 cars for half a day before rain washed out the completion of the test.

"We were one (dry track) window shy of running a full race simulation," said Chris Pantani, director of motorsports for Cooper Tires. "We still feel comfortable that we found something that we will certify (as the race tire spec) for next year."

Pantani said drivers were pleased with this year's tire, exemplified by how so many were able to race high and low on the 2.5-mile oval in another wildly exciting edition of the Freedom 100. He also pointed to Veach turning a lap in excess of 200 mph – the first to do so at IMS in Indy Lights, though the lap remains unofficial since it occurred in practice – adding "we want to replicate that for the racing."

Cooper Tires will return Aug. 24 for IMS testing on the road course that will help determine its tire specification for all 2017 road circuits. IndyCar.com