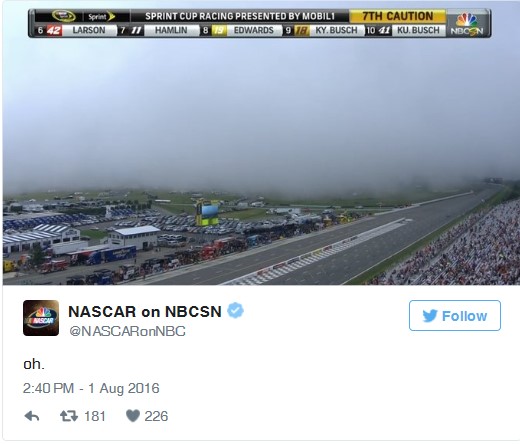 "What we worked through was really unprecedented in terms of the fog you had rolling in. The reason you kept cars out on the track under caution was to see if the fog was going to roll through, and if you red flagged the race and the fog had lifted, we've got a long delay to get back, and we didn't have that many laps to go. So that's why we kept cars out originally under caution…. on the red flag … we never lost the track, so in this case, I think most NASCAR fans want to see a complete race.

"We've always stated that we will make every effort to get a complete race in, and in this case since we hadn't lost the track, we wanted to wait. Unfortunately we had a lightning warning come in, and once the track had to evacuate the grandstands and we could get all the cars confiscated, we made the decision then to unplug it and announce that Chris had been declared the winner of the race.

"We kept looking behind race control and seeing if it would lift. At times you would see a bit of a window… [but] we needed a racetrack where we could see everything. Unfortunately that never happened. Candidly that was part of the decision. Lightning obviously forced that, but I would have anticipated shortly thereafter we probably would have had to make the call because we did not see any end in sight to the fog at that point. NASCAR