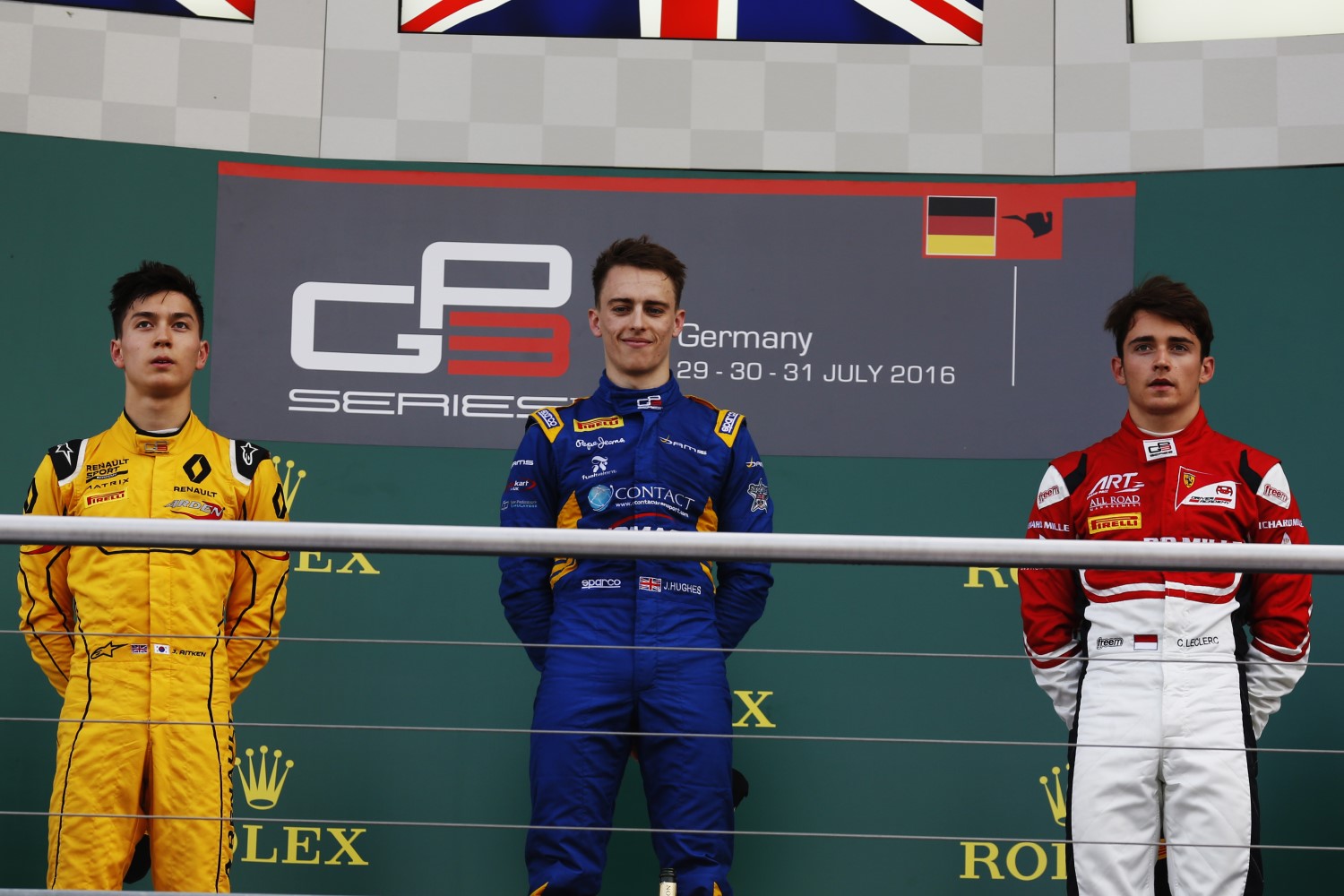 They say the first one is always the sweetest…Jake Hughes and his DAMS squad were overjoyed to celebrate their first win in the category in their debut season. The Briton had started on reverse pole but he dropped to second at the start of the race. Hughes remained calm and re-took the lead after a brief Virtual Safety car period and drove home to a confident and mature victory, much to the delight of his French squad. Arden International's and Renault Academy's Jack Aitken grabbed his first podium after passing ART Grand Prix's and Scuderia Ferrari Team development driver Charles Leclerc on the penultimate lap.

Hughes started from reverse pole but it was Jenzer Motorsport's Arjun Maini who made the better start from the front row to march into the lead of the race. Leclerc was up to third ahead of Aitken and Alexander Albon.

There was an incident at the Turn 8 hairpin which put a premature end to a number of drivers' races including the then Series leader Albon. The Thai ace retired in the pitlane, losing valuable points in his title charge. Trident's Artur Janosz and Koiranen GP's Ralph Boschung also retired after contact.

The Virtual Safety Car was deployed following the incident as the pack bunched up for several laps. At the end of lap three, the VSC period ended and Hughes was ready to make the most of it by passing Maini to re-take the lead of the race. The Indian rookie was swallowed up as Leclerc was quick to also sneak through into second. DAMS and Haas F1 development driver Santino Ferrucci was briefly up to third ahead of Aitken and Matthew Parry.

On lap 4, Aitken passed Ferrucci for third, whilst Hughes' margin at the front was 1.4s. A few laps later Maini moved into fifth place after overtaking Parry. There was more action through-out the field with Jake Dennis on a recovery driver after his Race 1 disappointment. The Arden International driver enjoyed a good tussle with ART Grand Prix's Nyck de Vries and then got the job done on Parry for sixth place.

Meanwhile Hughes began to increase his lead at the front to almost 2s over Leclerc. Tatiana Calderon who scored her first point in GP3 in yesterday's race also moved up the order after passing Kevin Joerg for ninth. On the penultimate lap, Aitken was all over the rear of Leclerc's ART machine; the Briton wasted no time and jumped into second passing the Monegasque driver.

At the checkered flag, Hughes crossed the line 2.6s ahead of Aitken to record his and his French team's first win in the category after working very hard in their debut season. He also added the fastest lap for good measure. Aitken claimed his first GP3 rostrum in second whilst Leclerc regained the lead in the title battle after pocketing another podium. Ferrucci, Maini, Dennis, Parry and De Vries completed the top eight.

Leclerc's lead in the drivers' standings is now three points over Albon and 11 points over Antonio Fuoco; the Italian failing to finish after his Race 1 victory. ART Grand Prix hold station at the top of the teams' standings ahead of Trident and Koiranen GP.

GP3 Series now takes a well-earned summer break and is back to first of a double-header at Spa-Francorchamps on August 26-28.