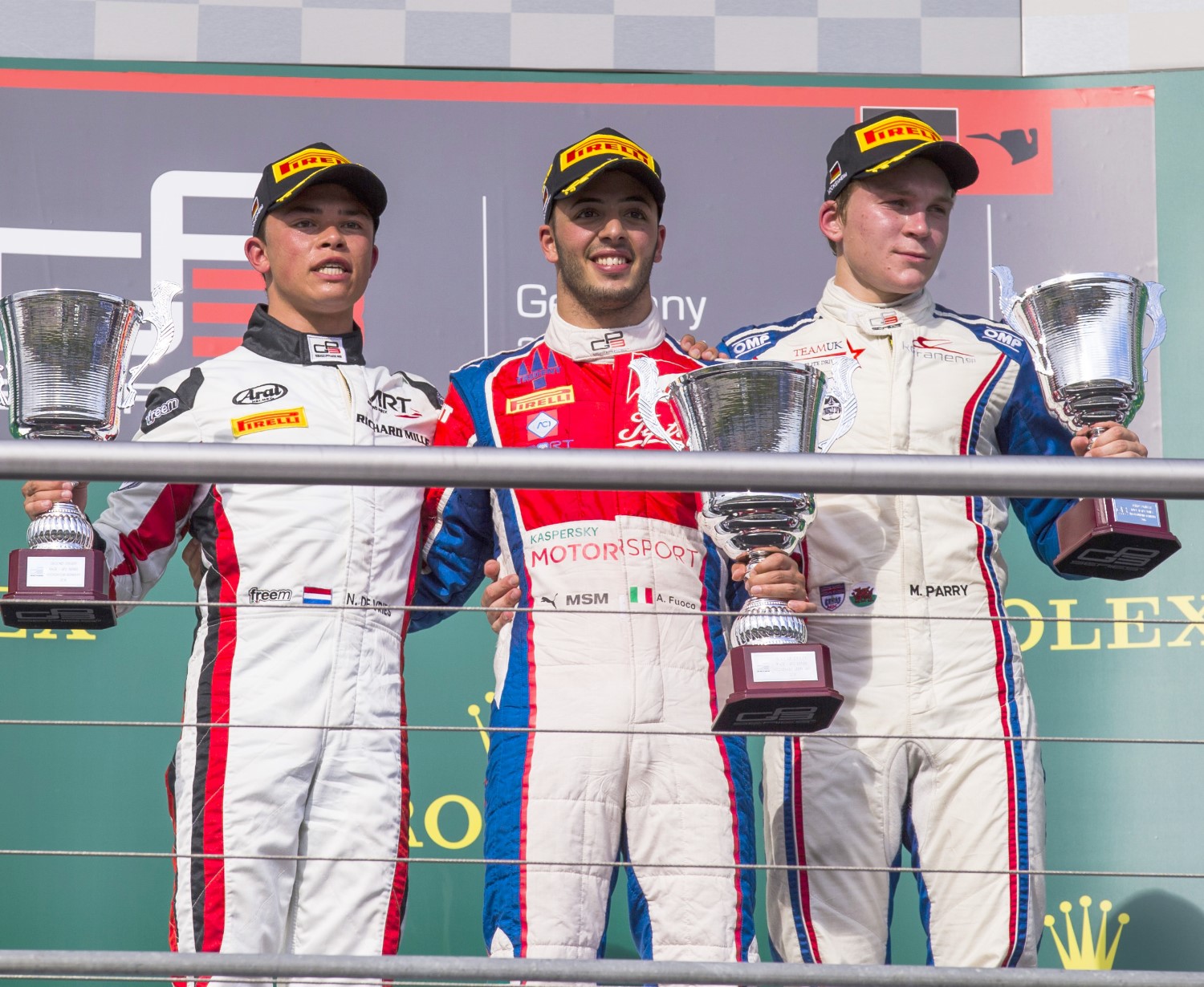 The Italian national anthem rung out over the Hockenheimring as Trident and Ferrari Driver Academy’s Antonio Fuoco stood victorious on the top step of the podium after winning Race 1. Fuoco had lined up fourth on the grid and capitalized on a VSC period to pass Alexander Albon and lead the race until the checkered flag. The last few laps were full of position changes in the top five with ART Grand Prix’s Nyck de Vries pocketing second position ahead of Koiranen GP’s Matthew Parry.

Series leader Albon started from pole with Arden International’s Jake Dennis due to start alongside him. Unfortunately the Briton failed to getaway from the pre-grid before the rest of the pack had passed him and therefore he had to start the race from the pitlane undoing all of his hard work.

Albon maintained the lead at the start of the race with De Vries, Fuoco and Leclerc in tow. Campos Racing’s Alex Palou was running in sixth but received front wing damage on the opening lap and was shown the black and orange flag, so the Spaniard had to pit and dropped down the order outside of the points.

There was an incident on lap three after Koiranen GP teammates Ralph Boschung and Matevos Isaakyan made contact. The Russian had to retire whilst the Swiss driver limped back to the pits for a new wing and was able to finish the race. Steijn Schothorst and Nirei Fukuzumi also made contact – the pair retiring. Due to the damaged cars on track, the Virtual Safety car was deployed.

The top five drivers were bunched up as they awaited the VSC period to end and it was Fuoco who was ready to pounce and seize the opportunity. The Italian passed Albon across the line, whilst De Vries and Albon ran side-by side. The Thai driver ran wide, dropping down to fourth ahead of Parry. Meanwhile Leclerc was up to second after passing his Dutch teammate and was catching Fuoco. The gap was down to as a little as 0.6s but the Monegasque driver seemed unable to make a pass.

As the laps ticked down, Fuoco built up an advantage of just over 2s back to Leclerc, whilst De Vries began putting pressure on his teammate to re-take second. Parry also wanted to join the fun as he was hot on the tail of Albon as the drivers from second to fifth closed up in the final laps.

There was a titanic tussle between Leclerc and De Vries as the duo ran wheel to wheel, but the Scuderia Ferrari Team development driver held position. But he ran wide shortly after allowing De Vries through into second and fell into the clutches of Albon and Parry.

It was all to play for on the final lap as Parry and Albon enjoyed a tasty battle and came out on top over Leclerc, demoting the Monegasque driver to fifth. Parry was able to fight his way into third to steal the final spot on the rostrum in a very entertaining finale. Fuoco was happy to miss all of the excitement behind him as he crossed the line over five seconds clear of De Vries to a well-deserved win.

Albon kept the Series lead by finishing ahead of his title rival Leclerc in fourth with Jack Aitken, Arjun Maini (Jenzer Motorsport), Jake Hughes, Santino Ferrucci and Tatiana Calderon completing the points on offer. Colombian racer Calderon was ecstatic to achieve her first point in the category in her rookie season.

Albon now holds a seven point advantage over Leclerc with Fuoco one further point drift. ART Grand Prix extend their mammoth lead in the teams’ standings but its tight in the battle for second with Trident moving back into second place ahead of Finnish outfit Koiranen GP. Tomorrow’s race starts at 09.15 local time (GMT+2) with DAMS’ Hughes on reverse pole.