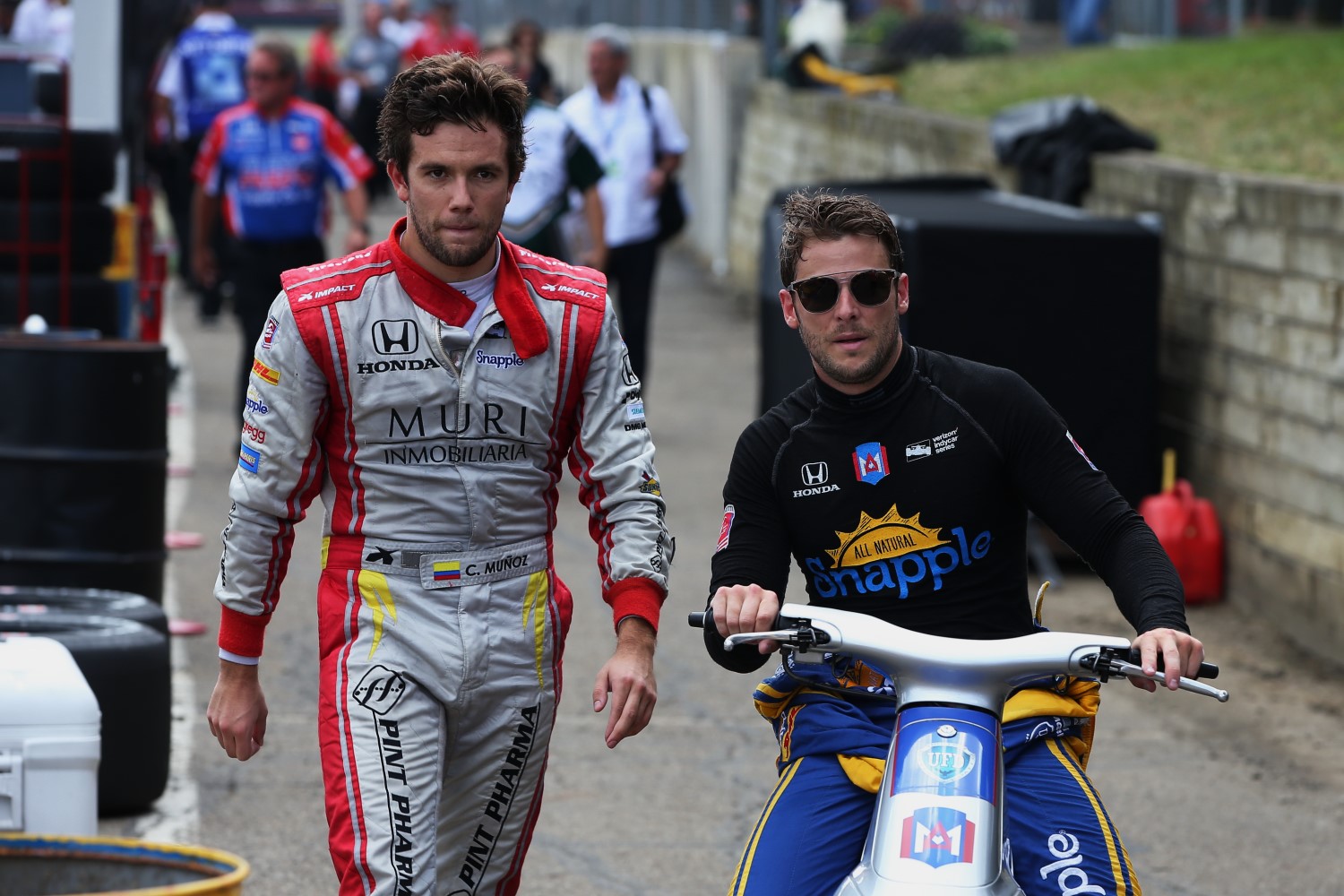 Two young Verizon IndyCar Series drivers don't know where they'll be next season. Mikhail Aleshin and Carlos Munoz are free agents after 2016 – will they return?

As we reach the tail end of another IndyCar season, it's time to speculate on the drivers' futures. Two of the league's "next generation" athletes, Mikhail Aleshin and Carlos Munoz, have contracts that will expire after 2016 – and their outlooks are considerably different.

Aleshin is in his second full campaign with Schmidt Peterson Motorsports. The 29-year-old Russian has demonstrated bursts of speed since returning to IndyCar after the 2014 wreck at Fontana that kept him out almost an entire season.

Counting the 2015 season finale at Sonoma, he has two Top 5 finishes and two Top 10 finishes over twelve races.

And team owner Sam Schmidt told Race that he expects Aleshin to be back in the No. 7 car next season.

"On Mikhail, he says he's coming back next year, and he will only get better," Schmidt said, adding, "It took Mikhail a little bit of time to get re-acclimated to the series and the tracks, but he's done a good job and he's definitely shown the speed."

SPM has already locked down James Hinchcliffe, who has one year remaining on the three-year contract he signed before the 2015 season.

But over at Hinchcliffe's former team Andretti Autosport things are a bit murkier. Munoz's contract also expires in 2016, which coupled with teammate Alexander Rossi‘s uncertain future means half the team could be gone before next spring.

The 24-year-old Colombian almost won the Indianapolis 500 in May but his comments to the magazine indicate that his continuing in IndyCar could wind up being more of a business decision than a driving one.

He went on to explain, "I know they need to find sponsorship for some cars. Sponsorship is really tough to find in Colombia, so it's complicated. And there are a lot of rumors on drivers and where they will go, so we will talk to other teams to see what they are doing."

Munoz has one podium and three other Top 10 finishes in 2016. In three full seasons, he has one race victory (2015 Detroit Race 2) and five podiums.

Both Aleshin and Munoz have the same concern, but two very divergent stories.

For Aleshin, though he doesn't have a 2017 deal done it would seem that he shouldn't be that worried. He has been fast on track; he just needs to find what's keeping him from turning that speed into race results.

And keeping him would make tremendous sense for SPM, which wants to find consistency in its driver lineup. It fielded Simon Pagenaud and Aleshin in 2014, then James Jakes and Hinchcliffe (and Hinch's substitutes) last year.

Conversely Andretti is feeling the pressure to make a move. The team has dropped behind Penske and Ganassi in the battle of IndyCar's Big Three, with Rossi's Indy 500 win the only victory that Andretti can claim. BeyondTheFlag