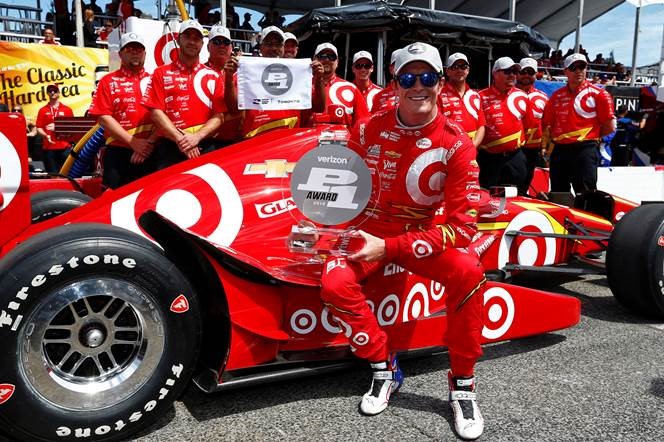 UPDATE The following is a statement from Mark Miles, CEO of Hulman & Co., the parent of INDYCAR and the Indianapolis Motor Speedway, regarding the announcement today that Target will conclude its longstanding partnership with Chip Ganassi Racing at the end of this season:

"INDYCAR would like to thank Target for its exceptional commitment to open-wheel racing and to Chip Ganassi Racing for its stewardship of the partnership for the past 27 years. The Target brand will always be an integral part of our sport’s history as the number of race victories, championships and Indianapolis 500 wins that occurred in the iconic red livery were unprecedented. We’re confident that the No. 9 will have new colors to carry in the near future as the team continues its success in the Verizon IndyCar Series."

AR1 readers know that for years we have harped on the fact that by IndyCar having NBCSN broadcast the majority of its races (resulting in little exposure for sponsors due to low ratings) will result in an IndyCar paddock void of much sponsorship. Well another long-time sponsor has just decided the value wasn't there anymore.

Target will leave IndyCar at the end of this season after 27 years with Chip Ganassi Racing that included 11 championships and four Indianapolis 500 victories according to Jenna Fryer of the AP.

The exit comes as Target is examining all of its marketing platforms under new chairman Brian Cornell. Target is also the primary sponsor of Kyle Larson in NASCAR's top Sprint Cup Series and will return to his car in 2017.

Target's relationship with Ganassi is one of the longest in any racing series, and the retail giant was a key player in helping Ganassi build his organization. Target not only sponsored Ganassi's first car as a team owner, it eventually became a partner as the Ganassi team grew to one of the top two players in open wheel racing.

"It was a really difficult decision that we made — we've been with Chip Ganassi Racing for 27 years and we are ridiculously proud of the success," Nygaard said in a telephone interview with The Associated Press. "But the Target brand is about being fresh and new, so we felt like this was the time to make the difficult decision and expand our sports marketing platform."

Well if the are 'expanding' their sports marketing platform, they decided to reduce it for IndyCar, and one has to believe the minuscule TV ratings were a major factor in the decision.