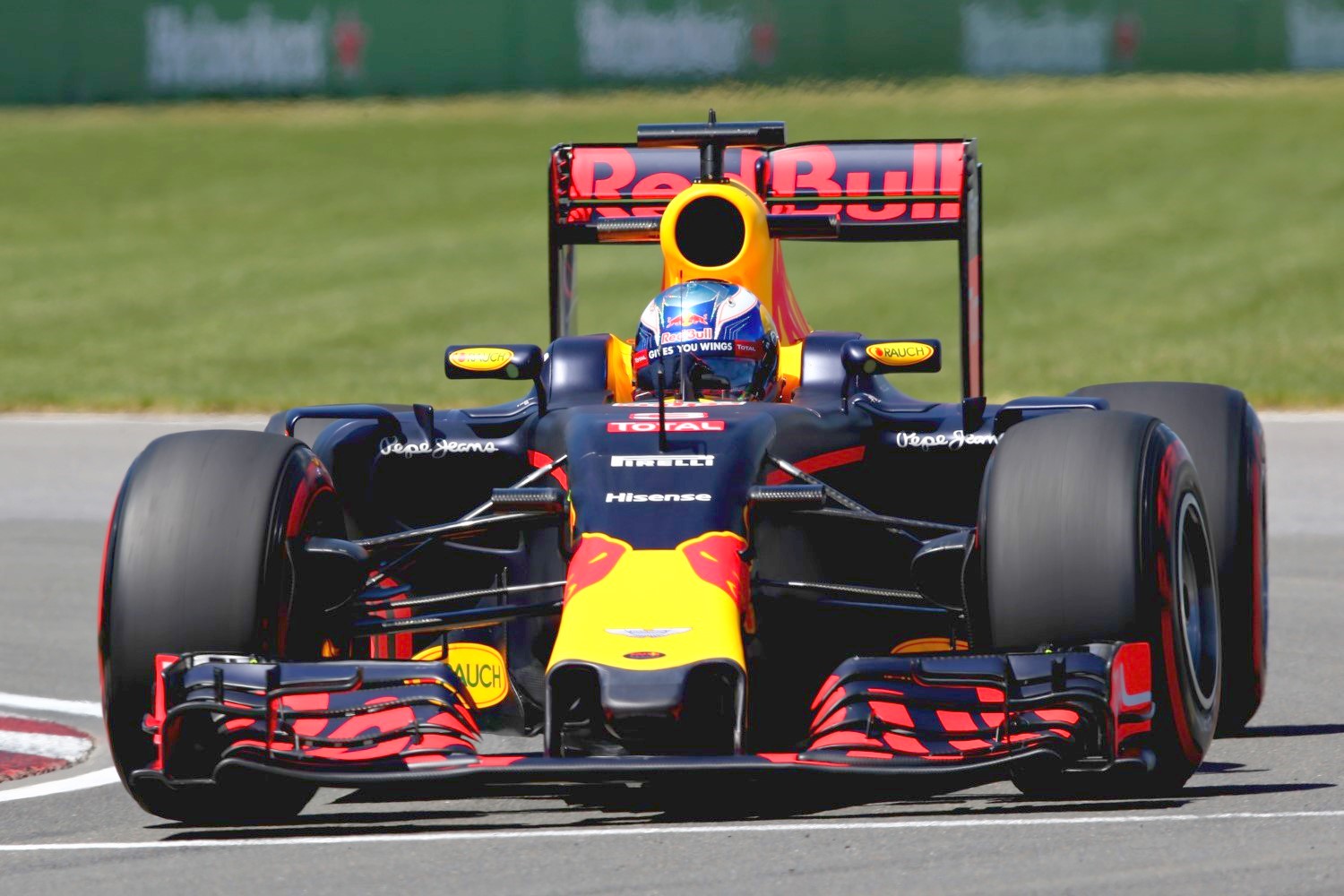 Renault only 47hp behind now – Horner
(GMM) Engine performance in formula one appears to be rapidly converging.

When the new 'power unit' era began in 2014, Mercedes had a clear lead but Ferrari has been first to close that gap in the years since.

"I think our engine is as good as Mercedes," Speed Week quotes the Maranello team's chief Maurizio Arrivabene as saying. "In aerodynamics and tire management we still lag behind."

But it is Red Bull that has actually slipped between Mercedes and Ferrari as the second fastest car in 2016, with the team powered by Tag-Heuer branded Renault engines.

"Renault has caught up," team boss Christian Horner is quoted as saying.

"And we know that there is more to come. We are currently about 35 kilowatts (47hp) behind — that's what the Renault guys tell us."

However, Red Bull will have to wait until 2017 for the rest of the gap to be bridged, with Renault's Remi Taffin announcing that the next big step won't be seen until next year.

"The big step will be next year's engine, race one," he said.

"Until we get to the end of this season we will be working on the specification we have now, trying to extract the most out it, but there won't be any more big steps as we had for races one and six," Taffin added.

Hockenheim revs up anti-terrorism security
(GMM) Hockenheim has ramped up security for this weekend's German grand prix following a spate of terrorist attacks in the country and Europe.

Britain's Telegraph newspaper said the sport's regular security contractor is almost doubling its staff for the race, and that the Bernie Ecclestone-led FOM is working closely with Hockenheim promoters.

"Everybody is a bit concerned," the F1 chief executive admitted.

"I can't see what they can do but they're doing whatever they can. Everybody is on alert, especially Germany. The race it not targeted at all," Ecclestone added.

A Hockenheim circuit spokesman confirmed Ecclestone's claim that the German grand prix is not specifically targeted, but said police and security "will take all necessary and appropriate actions to ensure the safety of everyone attending this weekend's race".

Officials admit German GP future in doubt
(GMM) After a gap year, the German grand prix might be back this weekend but the future of the country's place on the calendar remains in doubt.

It was the Nurburgring that caused Germany's 2015 absence and it seems the circuit remains unable to continue its alternating scheme with Hockenheim.

"We have a contract for 2016 and 2018 and other than that it is not our turn," Hockenheim chief Georg Seiler told the German news agency SID.

"Of course we want to keep formula one," said Seiler, "for the image of the circuit as well. But it must be at a level that works economically."

"We would love to host the German grand prix," he said, "but for this the right economic conditions must be present. We cannot afford formula one at any cost."

Hockenheim's Seiler said the problem is that new hosts like Azerbaijan and others are driving up the average annual race fees.

"If there were 20 countries that would pay EUR 50 million for a race, then the season would probably only take place in those countries.

"But for us there is no such public pot. We need to rely on the fans."

The halcyon Michael Schumacher days, however, are over, and Seiler said Hockenheim's audience is now "older" than before.

RTL, the German broadcaster, said Hockenheim has so far sold 52,000 tickets for Sunday's race, down on its target of 60,000.

Many think Hamilton's stance against teammate Nico Rosberg not losing his pole position for ignoring yellow flags is akin to mind games.

But Robert Doornbos, a former Red Bull and Minardi driver, agrees with Hamilton that Rosberg "should never have started from pole position".

"Nico lifted and said it was 20kph slower but he can say what he wants, it was still a dangerous situation," the Dutchman told the Ziggo Sport Totaal broadcaster.

"Waved double yellows mean you should be able to stop, not improve your lap and certainly not set the fastest lap of the whole weekend," Doornbos insisted.

"So I totally agree with Lewis Hamilton that it gives the categories below F1 totally the wrong message."

The qualifying incident occurred before the actual race, which Doornbos says was "boring" apart from the battle between Kimi Raikkonen and Max Verstappen.

Raikkonen and Ferrari argued afterwards that Verstappen should have been penalized for blocking, but the 18-year-old Dutchman's countryman Doornbos thinks Max simply raced "hard but fair".

Amid talk in the media of a 'crisis' and that technical chief James Allison is set to leave, team boss Maurizio Arrivabene last Sunday denied that number 1 driver Vettel might also be running out of patience.

But publications including Spain's Marca quote the German as saying: "Generally, patience is not a feature of a racing driver because it contradicts all of its principles.

"But some things you know whether they need more or less time," he added ahead of his first home grand prix as a Ferrari driver this weekend at Hockenheim.

"My move to Ferrari was never on the basis that everything will work by tomorrow. The team is building itself up again and for that we need time," said Vettel.

Vettel, 29, said he hopes his presence in a red car this weekend, rekindling memories of Germany's greatest son Michael Schumacher, is a boost for the fans.

"It would be very nice," he answered when asked if it will boost spectator numbers. "For me I think it is something very special to drive a Ferrari for the first time in Germany.

"Let's see if the people also think it's special and there are more red caps than silver," Vettel smiled.

"(Hometown) Happenheim is not far from Hockenheim, only half an hour, so there will be lots of my family and friends at the track which makes it very special.

"I started racing in karts in Walldorf, which is only 5 kilometers away so it's like racing in my living room," he added.

However, Vettel currently lives with his partner and young children in Switzerland, but he said nothing will change his "identity" as a German.

"Of course, I've based my life now in Switzerland but my family and most of my friends are all still at home," he said.

McLaren-Honda relationship closer than ever – boss
(GMM) McLaren and Honda have hailed the state of their current working relationship.

Last year, amid an awful start to the new Anglo-Japanese works collaboration, there were signs of tension between the British team and Honda's F1 chief Yasuhisa Arai in particular.

Arai is now gone, replaced for 2016 by Yusuke Hasegawa, and the better situation culminated in Fernando Alonso's seventh place in Hungary which the Spaniard called "the best weekend since I've been (back) at McLaren".

He credited some of the turnaround between 2015 and 2016 to Honda's Hasegawa.

"Yusuke is a former engineer so he knows very well what is happening in the garage and can adapt better to changes. He is also more used to the pressure and managing certain situations," Alonso is quoted by Spain's Marca sports newspaper.

"The relationship has never been as close as it is now," said the Frenchman. "It is very collaborative, very cooperative, we regularly meet face to face although today there is technology that means we are always in touch.

"The project is more mature than before, so far so good," Boullier added.

And Hasegawa-san said: "I agree with Eric. This year we have a very good collaboration with McLaren and we are progressing well together."

He confirmed that work on the 2017 engine has begun, while Boullier added: "We're still working on this year's car and also the next one, but I can say that after the (August) holidays most of the grid will be working 100 per cent on the car for next year."

Pirelli will take the hard, medium and soft tire compounds to the twisty Interlagos circuit in Brazil. This is the hardest tire combination the Italian manufacturer can bring.

One set of the orange-marked hard tires and one set of the white-banded mediums must be put aside for the race, with at least one of them being used.

Meanwhile one set of the soft compound must be assigned to Q3, before being then returned to Pirelli. It will be the fifth time of the season this combination has been chosen.

Meanwhile for Abu Dhabi the soft, super-soft and ultra-soft tires will be taken – the softest combination of Pirelli’s 2016 range.

A set of softs and super-softs must be kept for the race, with one being used, while one ultra-soft set has to be put aside for Q3.

For both events, the teams and drivers are then free to choose what compounds they want for the 10 remaining sets available.

It will also be the fifth time the soft, super-soft and ultra-soft tire compound combination has been used in 2016.

Pirelli has to confirm the tire nominations 14 weeks in advance for fly-away races, compared to just eight weeks for European rounds.

Wehrlein: Mercedes to decide 2017 plans
Mercedes-backed Pascal Wehrlein says it will be up to the German manufacturer where he races next year, as he focuses on the remainder of his rookie season at Manor.

Wehrlein stepped up to Formula 1 with the Mercedes-powered Manor team for 2016 after becoming the youngest driver to secure the DTM title the previous year.

Lewis Hamilton and Nico Rosberg are both tied to Mercedes through 2018, following Rosberg's confirmation, ruling Wehrlein out of a promotion for the next two seasons.

It has been suggested that Wehrlein could move to another Mercedes-supplied team, either Force India or Williams, but he is paying little attention to the talk.

"Mercedes will manage it [the future]; I'm not thinking too much about it," commented Wehrlein, who recorded his and Manor's first point at the Austrian Grand Prix.

"It's up to Mercedes. I'm happy and focused on the situation now, and then we will have to see what the opportunities are for next year, and then decide.

"At the moment, it's too early to say anything about it."

Wehrlein, 11 races into the 21-race season, admits he still has plenty to learn about Formula 1, but hopes he can capitalize on further points-scoring opportunities.

"There have been situations where we could have done better, but I think it's normal, as it's my first year in single-seaters (since 2013) – it's new, so I'm just getting used to it.

"We knew that there would only be a few opportunities this year where it would be realistic to be in a position where we could score points if everything goes right for us.

"Our pace is not in the top 10, at none of the tracks, it was just in Austria that everything was perfect – we were competitive, the car was fast and I felt happy in the car."