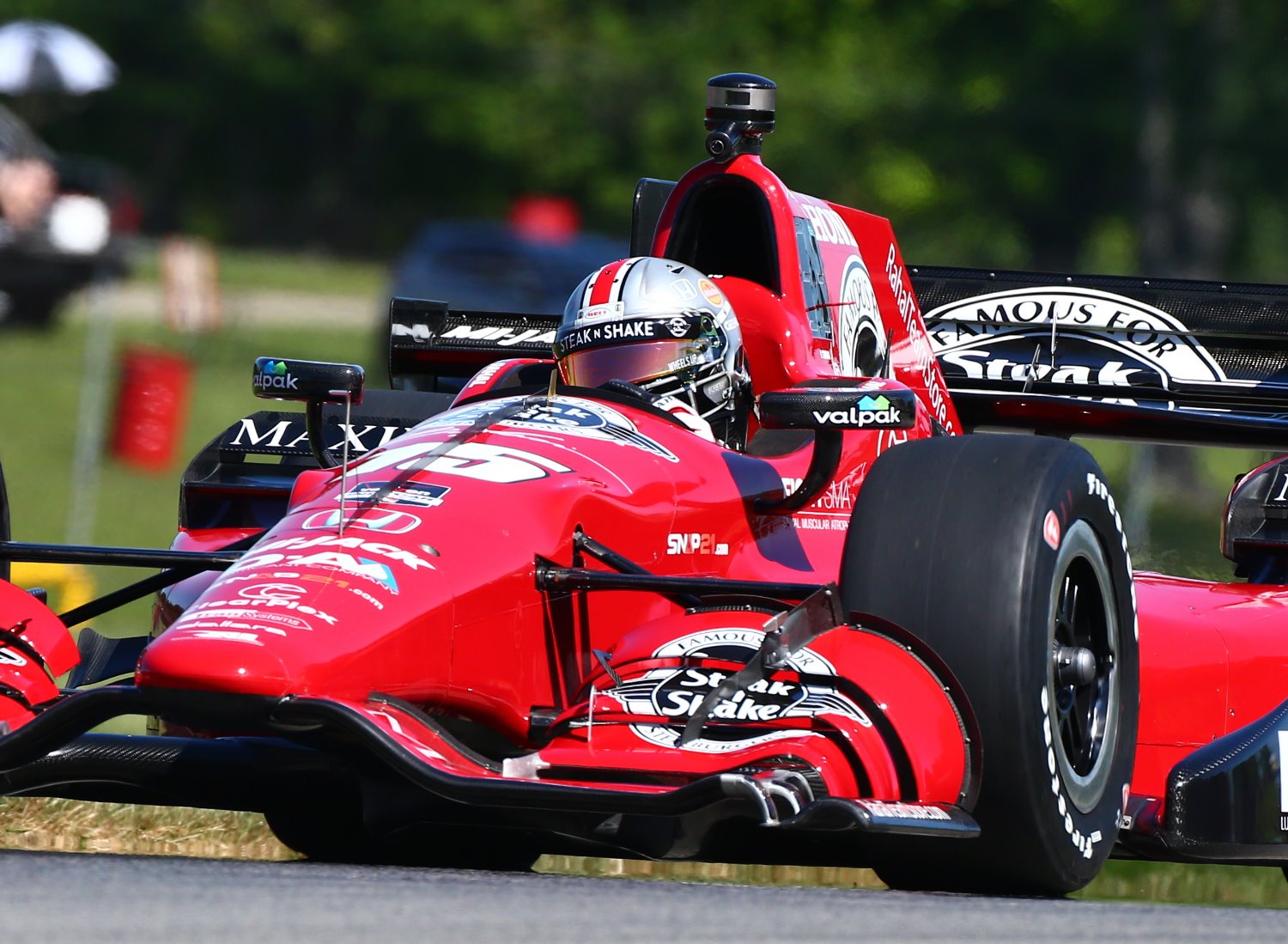 Graham Rahal’s surge in the second half of the 2015 season was highlighted by his popular win in the Honda Indy 200 at Mid-Ohio. He led a race-high 23 laps and won by a 3.4-second margin of victory over friend and former teammate Justin Wilson to close to within nine points of championship leader Montoya with two races to go in the season. Rahal started 13th after being hindered by the slower car of Sage Karam in qualifying. He was 11th when the team elected to pit early for their first stop due to the fact that Rahal was unable to drive to the car’s potential in traffic. Once in clean air, Rahal gained track position and leapfrogged cars ahead when they pitted and he moved up to third. On a restart he dropped to fourth when Justin Wilson passed him. He maintained a top-four spot for the majority of the stints. Later Rahal pit right before a caution came out for Karam and once the pits opened and all other cars made their stops, Rahal was in the lead. Ultimately he led a race-high 23 laps and held off Justin Wilson for two restarts and steadily built his gap to take the checkered flag 3.4 seconds ahead.

"We had to rally last year," recalled Rahal. “We started 13th which wasn’t great. We should have qualified better than that as our pace was certainly better than that. We ended up getting up to the top three on pure pace then I was held up in traffic. I said over the radio that I wanted to pit. I like to think about strategy a lot as a driver which is the way my dad was. I knew that with the strategy we were running, we were in the window to pit, I knew I was getting held up so I made the call and told them I was coming in. It happened to go yellow right as we came in which was absolutely perfect. It worked out great for us. Mid-Ohio is a place that I grew up at and spent so much time running around. There was so much pride involved in that day. It’s hard for me to explain the feelings that I had to people. It was a great moment in my life and I just hope it carries over and we see a lot of support this year."

GRAHAM ON THE PERSONAL SIGNIFICANCE OF HIS WIN AT MID-OHIO

"Mid-Ohio is home to me. I grew up at the track and spent so many days there as a kid. Watching races there, being a part of it, seeing and loving what it’s all about is a big part of who I am. The way it all came together last year, every aspect of it made it perfect for me. Having the Buckeye helmet and gear, having my entire family there – which never happens, ever, since everyone is spread out –having the crowd support, to have that sort of experience makes it impossible to tell anyone how much it means to me. The sense of accomplishment for me is so great. Everyone knows this but I love Ohio. I’m very proud to be from Ohio and that event means so much to me. To win it is a career accomplishment that I will never forgot or take for granted. It means just as much to me now as it did then. To me it’s one of the highlights of my lifetime, and definitely the most meaningful win of my career. I sure hope it happens again but you never know."

GRAHAM ON THE PRESSURE TO WIN AT HOME

“Now there is probably less pressure because we have won there. I think the fans around Mid-Ohio have wondered if or when that (win) was going to happen. I hope it revitalizes the fan base. Last year the crowd was probably the best I had ever seen. I just hope more and more people come out and support us this year."

The series has competed on three road courses to date this year and Rahal progressed to the Firestone Fast Six all three times. At Barber Motorsports Park, he qualified sixth and challenged Simon Pagenaud for the win. Damage to an already compromised front wing hindered his pursuit after leading four of the last nine laps. He qualified third for the Grand Prix of Indianapolis but his car was one of two that failed the post-qualifying inspection and he was relegated to a 24th place start. He charged back to the front and narrowly missed another podium appearance with his fourth place finish. He is hoping the competitiveness will carry over to this weekend’s Honda Indy 200.

"I expect that we should be very competitive and our performance from the other road courses should carry over to Mid-Ohio. The tricky part is that everyone is competitive nowadays. There are no longer any bad teams or non-contenders. So I fully expect it to be a patented tight IndyCar race weekend and I hope the Steak ‘n Shake team can come out on top again!"

Rahal won two events in 2015 – the MAVTV 500 at Auto Club Speedway on June 27 and the Honda Indy 200 at Mid-Ohio on August 2. As the series doesn’t race at Auto Club Speedway in 2016, this weekend will mark the second time in Graham’s Indy car career that he returns as the defending winner. His first of three Indy car wins came in St. Petersburg in 2008.

"I think more than anything we are just focused on this year and what it will take to win again. We have certainly had an up and down season, and are in need of a good result this weekend in a big way. It’s exciting to go back as the defending champion, but we want to do that again year in and year out. We just have to focus on the task at hand, and hopefully we can pull it off."

GRAHAM ON THE RECENT TEST AT MID-OHIO SPORTS CAR COURSE

Rahal was one of 20 drivers to test at Mid-Ohio Sports Car Course on July 21. He was the fastest Honda-powered driver and hopes that carries over to race weekend.

“The test was good. We were focused on getting to the mileage limit on our Honda engine, which we successfully did. Now we turn our attention to finding little bits of speed we will need to be quick come this weekend. I hope we can get the balance a bit better, but it didn’t feel far off on the test day."

“A lot of variables go into this, but making sure we do all the right things, make the right strategy calls, qualify well, and most importantly have a little bit of support from Lady Luck. If all of that happens, we should be a contender."

The 2016 Honda Indy 200 will mark Rahal’s ninth Indy car race here. His best start is fourth in 2009 and his best finish is his win here in 2015. He has competed in many other series at his “home track." In 2015, he led a race-high 23 laps en route to victory with a 3.4-second margin over Justin Wilson. In 2014, he qualified seventh and avoided an opening lap, multi-car crash to take over fourth place. He maintained a top-five position throughout the race with the exception of pit cycles and ran as high as third at one point. An alternate strategy played out for eventual winner Scott Dixon who started 22nd and made four pit stops in comparison to the majority who made three. Rahal took the checkered flag in fifth place to better his previous best finish at this track of eighth place in 2009. In 2013, Rahal qualified 22nd, and ran as high as eighth on a three pit stop strategy but finished 18th after being held up by drivers on a two-stop strategy. In 2012 he qualified 22nd, started 21st (engine penalty ahead on grid) and finished 11th with Service Central Chip Ganassi Racing (SCCGR). In 2011 he qualified sixth, stalled in the pits after his first stop and finished 24th with SCCGR. In 2010, he qualified 25th with Newman/Haas/Lanigan Racing (NHLR) and had moved up to 14th when he attempted to pass Wheldon for 13th on Lap 61/85 in T2 and went off course and dropped to 21st. Finished 20th. In 2009, he started fourth with NHLR and looked likely to finish fourth before an off-track excursion while fifth late in the race led to an eighth place finish. In 2008, he started 14th with NHLR and ran as high as eighth, but an off track excursion on lap 53 limited him to a 16th place finish. At the age of 16 in 2005, he became the youngest to claim the SCCA National Formula Atlantic championship at the SCCA National Championship Runoffs here by a dominant 43-seconds. He also competed in the Star Mazda race here in 2005 (S/F 4/9) and tested a Grand Am car here in 2007.

GRAHAM AND THE POINT STANDINGS

With four races remaining on the schedule in addition to the rescheduled Round 9 at Texas Motor Speedway on August 27, Rahal is ranked 11th in series point standings with a total of 292. The season-finale road course race at Sonoma Raceway is again a double-points event. Rahal is only 52 points behind fifth place Josef Newgarden (344), and only eight points behind seventh place Alexander Rossi (300).

GRAHAM AND HIS LOVE OF ALL-THINGS THE OHIO STATE

Graham wore special The Ohio State-themed racing gloves and a helmet when he won the 2015 Honda Indy 200. Stay tuned for more information on how he plans to celebrate his passion for the university for the second time. He is scheduled to unveil his plans at the Steak ‘n Shake appearance at Easton Town Center on Thursday, July 28 from 4:30-6:00 p.m. ET.

Dario Franchitti will be honored at the 5th Annual Safelite AutoGlass “Rally for The Ranch," a three-event extravaganza to be held July 28 – 31. The event is supported by The Bobby Rahal Foundation and benefits The Buckeye Ranch and its programs that help area youths and their families dealing with mental, behavioral and substance abuse issues. Previous honorees include Johnny Rutherford (2012), Al Unser, Jr. (2013), Rick Mears (2014) and Bobby Unser (2015).

Mid-Ohio weekend features a “Christmas in July" theme. Honda Racing, Verizon and Firestone are inviting fans to get festive during The Honda Indy 200 at Mid-Ohio weekend by camping and participating in Christmas in July themed activities for the return of the #CampingWithHonda initiative. Honda Racing will host activities for all race fans during the event weekend. Activities on July 30 will feature an "Ugly Hawaiian Shirt" contest and a community bonfire and s'mores Saturday night, with live music provided by Columbus' premier party band MidLife Crisis. For campers, there will be a tent and motorhome decorating contest with drivers Graham Rahal and Conor Daly judging the best Christmas in July theme following qualifying.