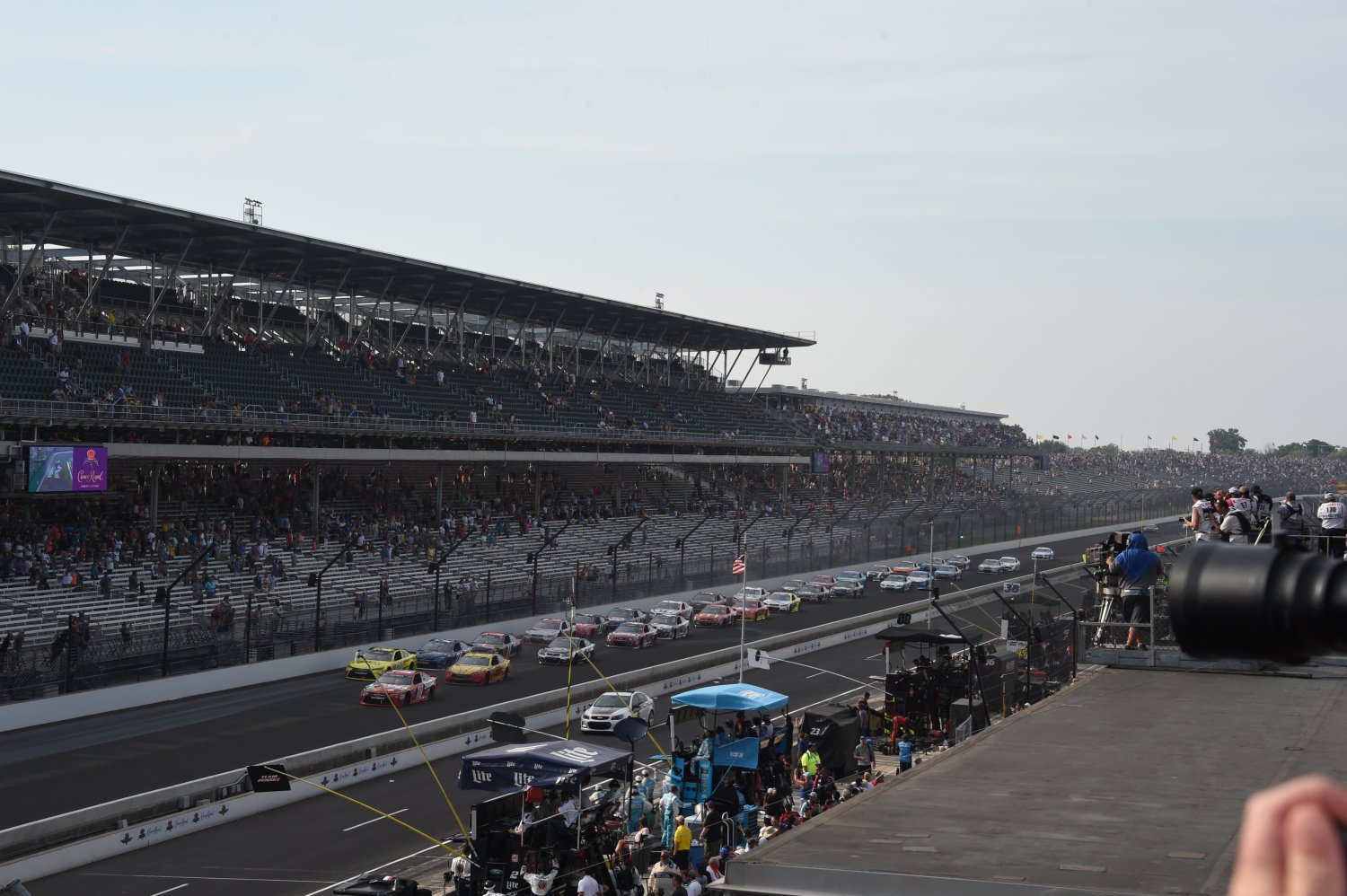 The Indianapolis Star estimated the crowd at about 50,000, an optically horrific scene for a track that seats roughly 250,000 and hosted an estimated 350,000 for the 100th running of the Indianapolis 500 in May. NASCAR announced in 2015 that it had reached five-year sanctioning agreements with all of its Sprint Cup venues.

“It's a big place," Miles told USA TODAY Sports. “When you use the whole stands, it takes a really big crowd. It's an event that's important to us. I think it's important to NASCAR and to the NASCAR paddock, so we are just going to redouble the effort to grow it."

Miles said he still thinks the track will reach the company goal of 600,000 attendees at the speedway this year. In excess of 477,000 attended events here in May. The track is slated to host a Red Bull Air Race for the first time on Oct. 1-2.

"I think we'll get right at that 600.000 number for the year," he said. "I think the heat has been a deterrent today. Normally I don't worry a lot about heat. I worry about wet and rain and lightning but clearly it (was) really hot today and that's had an effect in the attendance. We are going to keep working harder and really up our game so, really, we can do justice to May here at the Motor Speedway and focus more energy and resources on the Brickyard as well. We will build from here." Brant James of USA Today

07/25/16 The umbrella has my attention. It's red and enormous, big enough to shade two people under it, and big enough to block the view of 10 or 15 fans behind it. But it's not blocking anybody. Because there aren't any fans — not within 20 feet of the umbrella. None to the left, none to the right, none behind that big red thing writes Gregg Doyle of the Indy Star.

The umbrella is in Indianapolis Motor Speedway's grandstands. The Brickyard 400 finish line is so close, I'm counting the individual bricks as I approach the umbrella. The seats here are great, is my point. But this section of IMS is mostly empty, which makes it better than other sections of IMS on Sunday.

Which were completely empty.

The Brickyard 400 was a race almost nobody saw. On the bright side? There wasn't much to see. It's a race nobody will remember, nobody but the Toyota team of Kyle Busch, who started from the pole and led 149 of 170 laps to win a race devoid of racing. There were just four lead changes, just one during green-flag conditions.

This race couldn't end soon enough on a day where the Indianapolis area was under a heat advisory. It was 91 degrees and felt like 103 — at the end of the race, near 7 p.m. How hot was it when the race began in midafternoon? Molten lava hot. Fans were walking around the Speedway with wet towels on their heads.

The two people under that red umbrella are George Vaught and his daughter, Lindsey Kerr. George, a 59-year-old from Bloomington, Ill., has been to every Brickyard 400 since the first one in 1994 attracted a NASCAR-record crowd of 250,000. For Lindsey, 27, this is her 16th Brickyard 400. Every year she brings an umbrella for shade as she walks the grounds before the race.

This is the first time in 16 years she didn't have to put the umbrella away.

“I wasn't blocking anybody," Lindsey was telling me during one of eight overall cautions on Sunday, “so why not?"

What happened on Sunday was the continuation of a sad trend not just for the Brickyard 400, but for NASCAR. Attendance has plummeted across the board, though IMS has seen the biggest drop — from several years above 200,000 to last year's estimated crowd of 75,000. And now this year, where the crowd might not have topped 50,000.

But then, that's a guess. NASCAR stopped providing attendance after 2012 because it can't handle the truth. But television ratings are prickly — NASCAR can't stop us from knowing those numbers — and the 2015 season saw Fox receive its four lowest-rated races since it began broadcasting NASCAR in 2001.

At IMS, little can be done to help. Shrink the capacity to eliminate the optics of all those empty seats? No chance, not with IMS needing to sell as many Indianapolis 500 tickets as possible to survive. Night racing, to provide cooler temperatures, is another non-starter. IMS President Doug Boles has estimated it would cost $25 million to light the facility. Anyone willing to give IMS that kind of coin, given the direction of NASCAR's attendance?

When it was over, runner-up Matt Kenseth and third-place finisher Jimmie Johnson shared the media podium while Busch celebrated on the track. They made opening statements. The media was invited to ask questions. Nobody had one.

The media room Sunday was as empty as the grandstands.

As Kenseth and Johnson were excused from the news conference, I blurted a question about racing in a facility that looks empty.

“That's for you, Jimmie," Kenseth said.

Nobody likes this topic. Can't blame them. Better things were happening this weekend, what with one Indiana driver, Jeff Gordon, coming out of retirement to replace injured Dale Earnhardt Jr. — and another, Tony Stewart, making his last scheduled appearance at IMS.

And as for Busch, well, wow. He won his fourth race of the season and set a Brickyard record with 149 laps led.

The stories were plenty, but the place was barren. Greg Bowman had the best spot to hawk the official Brickyard 400 program, his blue kiosk in the shadow of the IMS pagoda — within sight of the pedestrian walkway — but when I found Bowman on Sunday he was all by himself. Well, except for a huge stack of unsold programs.

“This is the slowest I've ever seen it," Bowman said, then gestured toward the track, where we could make out the half-empty grandstands overlooking the finish line. Bowman shook his head.

The infield was just as quiet. I did find four 30-somethings hanging out under a canopy during the race — Sam and Angie Lively of Greenwood; and Jerry and Amanda Smith of Terre Haute.

Would you be here, I wanted to know, if it wasn't free?

Silence. Then Sam Lively spoke up.

The price isn't right, not for four hours in 100 degrees, and not to watch a race without much racing and with some of the worst sightlines in NASCAR. In addition to being unable to see most of the track, fans at IMS see very little passing thanks to some of the flattest turns in the sport. IMS turns are banked just 9 degrees, compared to 33 degrees at Talladega, 31 at Dayton and mid-20s at Bristol, Darlington and Texas. Gregg Doyle/Indy Star