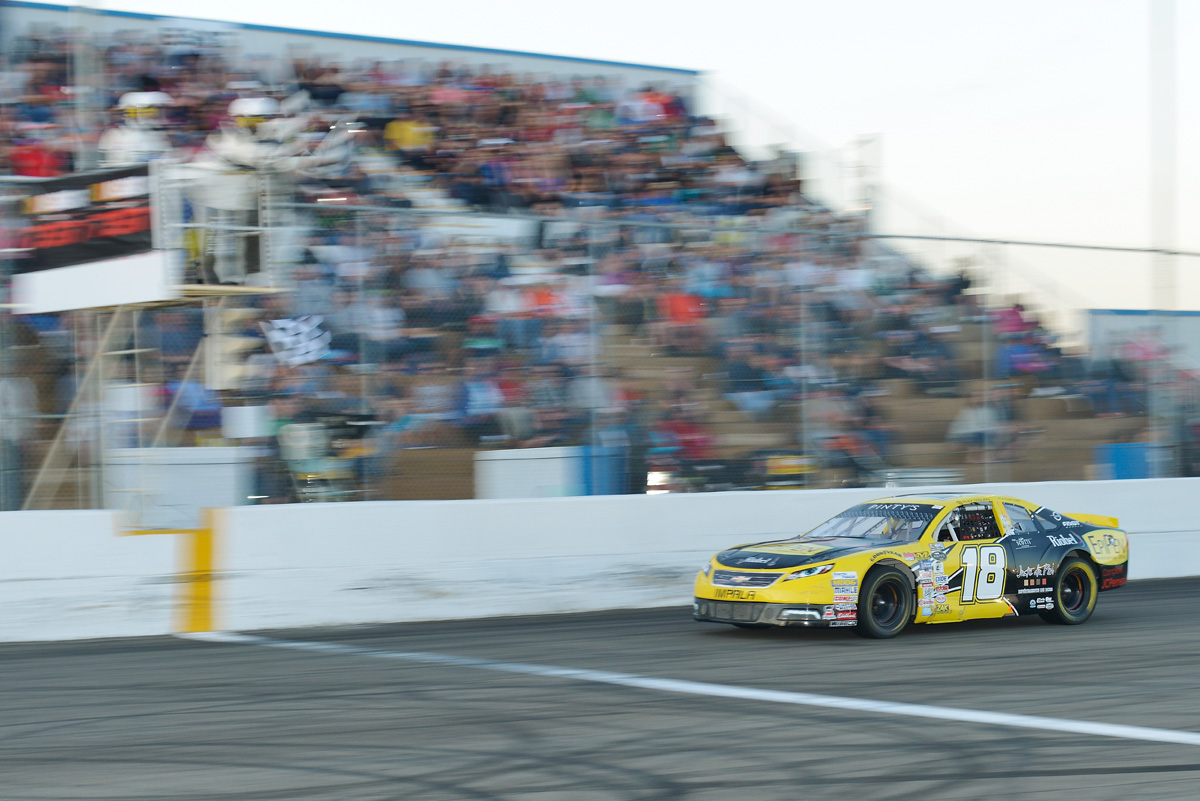 Alex Tagliani won his third race of the 2016 season, his second in two weeks, at the Alberta Has New Energy 300 held Saturday night at the one quarter-mile paved oval Edmonton International Raceway in Alberta. Starting on the outside of Row 2 following the lone qualifying session of Round 6 of the NASCAR Pinty's Series held earlier that afternoon, the Laval, Quebec driver was shoved aside at the start of the race and lost a few position before he started to climb up the field.

On lap 60, he was back in fourth place behind pole sitter Kevin Lacroix, LP Dumoulin and race leader Cayden Lapcevich. After disposing of Lacroix, Tagliani dove inside Dumoulin for second place at the restart on lap 86. Two laps later, he took command of the race. Tagliani would never relinquish the lead until the checkered flag was displayed on lap 300 to score his fifth series win.

"We had a great race," said Tag. "Tagliani Autosport once again gave me a great car. The number 18 Chevrolet EpiPen/ Riobel/ CanTorque/ Complexe JCP Juste du Pin was perfect. After a tumultuous start, I slowly climbed up the field to finally take the lead on lap 86. Following the mid-race restart, Andrew Ranger was all over my rear view mirror. During the next 50 laps, there were three yellows and on each restart, it was a hard battle but I kept the lead. At one point, I took off and never looked back.

"Once again EpiPen has joined the Summer of Tag program in the Allergy-Friendly Food Drive Challenge and the second drive of the season held in Edmonton was a true success as we collected non-perishable food and donations. We are very pleased with the fans reaction on the presentation," concluded Tagliani.

Louis-Philippe Dumoulin of Trois-Rivieres finished second, four seconds back, followed by Cayden Lapcevich of Grimsby, Ontario. Jamie Krysik of Grande Prairie, Alberta and Mark Dilley of Barrie, Ontario complete the top five. Eighteen drivers started the race and 12 crossed the finish line, with seven on the lead lap. The race was under caution nine times for 74 laps.

Tagliani won his first-ever series race in Edmonton back in 2008, when it competed at the Edmonton City Centre Airport. Last year, in his second race on the Edmonton oval, he finished seventh. In 39 NASCAR Canada Series starts, Tagliani has five wins, six poles and 14 top five.

Following his victory in Round 6 of the NASCAR Pinty's Series and despite missing the season opener, Tagliani has moved from fifth to third in the Driver standings with 223 points. Andrew Ranger is still the championship leader with 249 points, but his lead has been cut down to only nine points on Cayden Lapcevich. Tagliani's car owner Colin Livingston, now leads the Owner Standings with 256 points, seven ahead of Team Kennington.

The Alberta Has New Energy 300 will air on TSN on Sunday, July 31 at Noon. The NASCAR Pinty's Series continues its Western Canada swing with its next race on Wednesday, July 27 at the Wyant Group Raceway in Saskatoon, Saskatchewan.