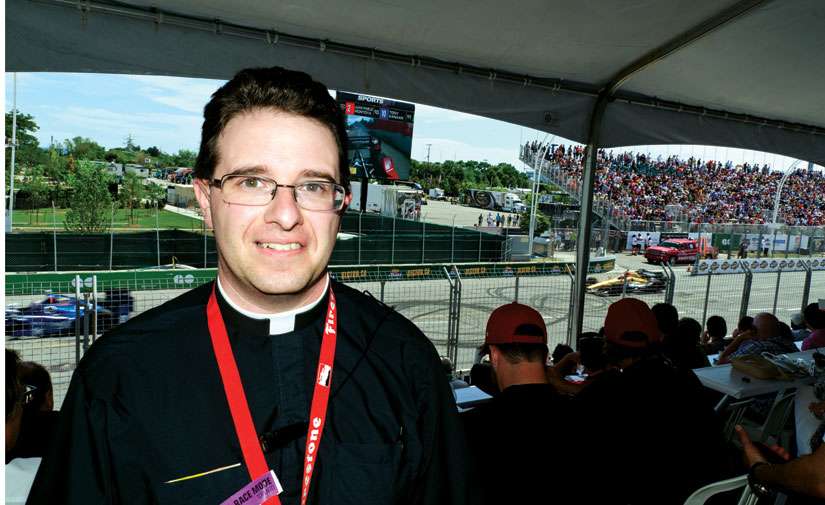 When the Indy comes to town, organizers bring almost everything a race team could need — including a priest to celebrate Mass.

At the recent Honda Indy, held in Toronto over the July 15-17 weekend at the Exhibition Place grounds, the padre on patrol for the weekend was Fr. Jeff Calia, parochial vicar of St. Peter the Apostle University & Community parish in New Brunswick, N.J.

"There are about half a dozen other priests" who serve the Indy ministry, said Calia. "We just kind of fit in where we can and try to make sure that the whole schedule is covered so that there is a priest at every event."

With 16 stops during the 2016 IndyCar Series — which began on March 13 in St. Petersburg, Fla., and will wrap up on Sept. 18 on Sonoma Raceway in California — each priest will spend two to three weekends ministering at the track.

Calia's second stop will be at the Pocono Raceway in Long Pond, Pa., for the running of the ABC Supply 500 on Aug. 21.

Along with providing a spiritual presence during the entire weekend event, Calia's primary job is to celebrate Mass.

"A Catholic Mass is offered at every race on Sunday morning or if the race is on Saturday they'll have the service on Saturday," he said, adding that a Protestant service is also celebrated, though neither service takes place in a church.

On July 17 at 8 a.m. Calia held a Catholic Mass inside the Enercare Centre at Exhibition Place.

Unfortunately the stars of the show, the drivers, rarely get to attend services. Crew members run a close second when it comes to having the worst track record for attending Mass on race day. Understandably so, said Calia.

"They're so busy getting ready and a lot of them they just can't make it," he said. "I would like to see more of the drivers and more of the team members coming to Mass."

For those who miss Communion and long for the sacrament, Calia sets out on foot, Eucharist in hand.

"There are a lot that we know who would like to be able to make it," he said. "So I'll try to find them and get Communion to them afterwards."

But it isn't just the drivers and those closest to them whom Calia considers himself shepherd of for two weekends out of the year. They are only a small part of the community that puts on such a huge event.

"There are hundreds and hundreds of people who work behind the scenes to make the races happen," he said. "The drivers get all the glory but so much hard work goes on behind the scenes and these are the folks who … we are there to give them a Sunday church experience when they can't get there themselves." Evan Boudreau/The Catholic Register