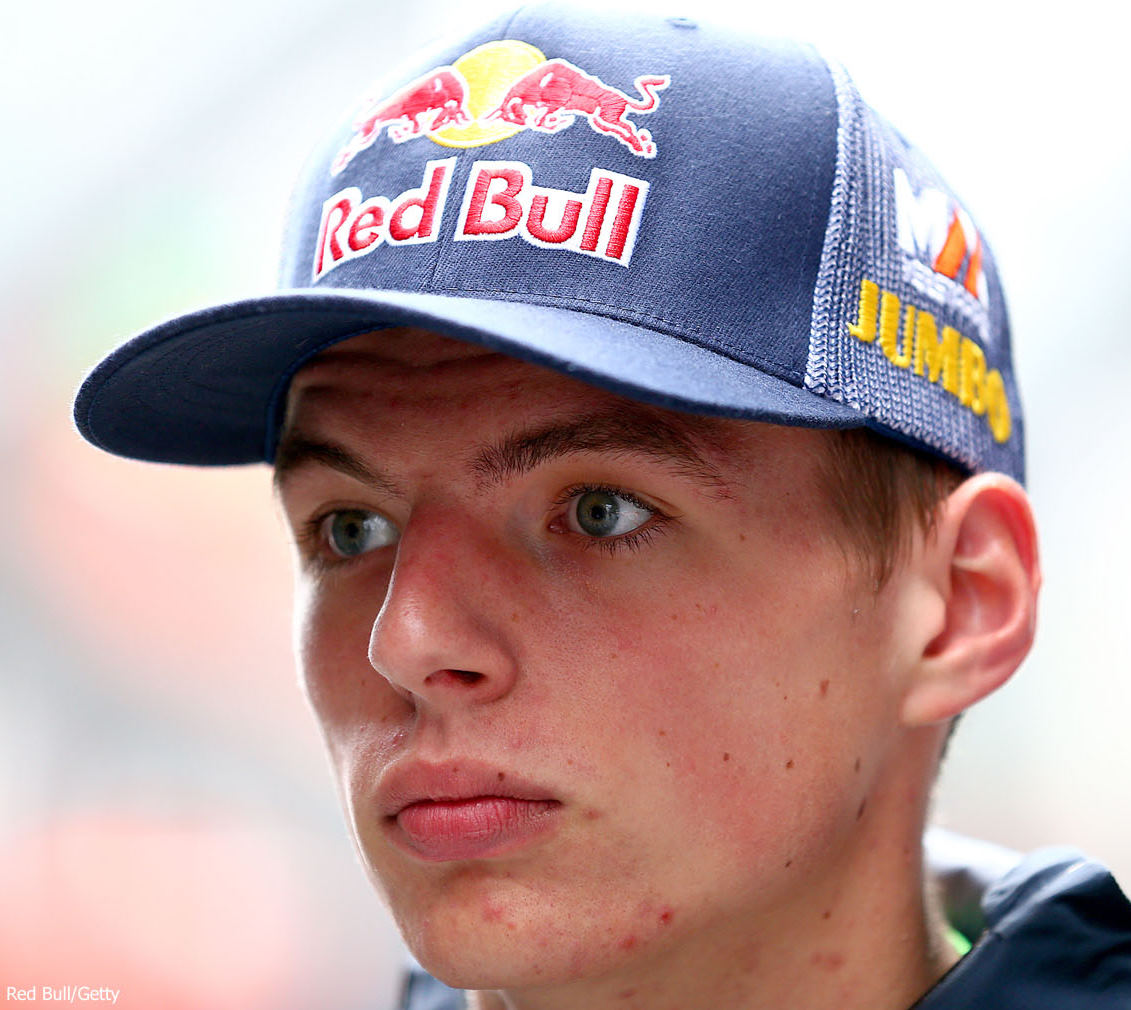 Verstappen plays down title chances
(GMM) Max Verstappen has played down his chances of taking on Mercedes' might for the 2016 world championship.

Despite driving for Toro Rosso for the first four races of 2016, the 18-year-old has just 10 fewer points than Red Bull teammate Daniel Ricciardo.

At the weekend, he collected the prestigious Lorenzo Bandini trophy in Italy but played down his hopes of bridging the 78 point deficit to Nico Rosberg's lead.

"I lost a lot of points in the first few races but I think at the moment the Mercedes are just too strong," he told the Italian news agency Mediaset.

"Too many things would have to happen for me to fight for the world championship. But from third to sixth place is very close and I'm focused on being in the best position possible," Verstappen added.

He is also quoted by Spain's El Confidencial as saying: "Our main goal is to keep reducing the gap to Mercedes, and we can overtake Ferrari in the constructors' championship.

"Those are our main goals," he revealed.

Verstappen thinks it is a very real target for Red Bull to now establish itself as a consistently stronger force than Ferrari.

"I'm sorry to say it here (in Italy)," Max was quoted as saying by Marca sports newspaper, "but while we started the championship behind Ferrari, we are ahead of them and now the target is to reach Mercedes."

Champions don't mind long 2016 calendar
(GMM) Two prominent F1 drivers say they have no problem with this year's longest-ever race calendar and the shift away from Europe.

Many people who work in the sport are bemoaning the unprecedentedly long 21-date schedule, and the fact that there are no less than four races in the month of July.

"For me it's no problem," said McLaren-Honda veteran Jenson Button.

"I fly in on Thursday morning and most of the time leave on Monday morning.

"For the mechanics it's different, they're probably at home only one day of the week," he is quoted by Brazil's UOL. "It's very difficult for their families."

World champion Lewis Hamilton, who jets around the calendar and elsewhere in the world aboard his red private jet, also doesn't mind the current schedule.

"There are a lot of races this year but, personally, I like the races outside of Europe, usually because the weather is better," said the Briton.

"I don't mind long flights — I like to be away from home," Hamilton added.

Rosberg relishing chance to fight back
Nico Rosberg says he is relishing the opportunity to fight back at the Hungarian Grand Prix after his title lead was cut to just one point in Britain due to a radio rule violation.

Rosberg developed a gearbox issue in the closing stages of the Silverstone race and was told to change a setting on his steering wheel, while avoiding seventh gear.

Mercedes was ultimately deemed guilty of breaching the rules by the stewards, which handed Rosberg a 10-second time penalty, dropping him from second to third.

Hamilton has won four of the past five races to put pressure on Rosberg, but the German is looking forward to resuming the battle at this weekend's event in Budapest.

"Silverstone was a good weekend except for the loss of position following the stewards' decision after the race," said Rosberg, as he discussed events at the previous round.

"It was disappointing to lose a hard-fought and deserved second position in such a way – but we have accepted the decision and now I have to look forward with positivity.

"I am leading the championship coming up to the halfway point and there's still a long way to go.

"The battle is on with Lewis and I'm feeling great in myself and great in the car, so bring it on!

"I can't wait for the next battle between us in Budapest.

"It's a tough circuit that really tests you as a driver and a challenge that I really enjoy, so I'm looking forward to an exciting and hopefully successful weekend!"

Rosberg, although a fan of the Hungaroring, is yet to finish on the podium at the track, his best result of fourth coming in 2009 with Williams and in 2014 with Mercedes.

Steiner says Q3 'achievable' for Haas
Getting a car into the third and final stage of qualifying is an "achievable" target for Haas during its rookie campaign, according to team boss Guenther Steiner.

Haas is yet to mark a Q3 appearance, with Romain Grosjean's ninth-place slot in Bahrain coming under the short-lived elimination format, when eight drivers progressed.

"I would say it is brutal in the midfield, which is where we are in the standings," said Steiner, ahead of this weekend's Hungarian Grand Prix at the Hungaroring.

"We just need to make sure the cars are as prepared as possible, the tires are in the range they need to be, the drivers are hitting their marks perfectly, and that we go out on the track at the right time.

"It ends up being a lot of ingredients that we have to get together, but I think getting to Q3 is achievable.

"We just need to work on all of the above points."

Haas has scored 28 points so far this season, all courtesy of Grosjean, and Steiner feels that the outfit should be proud of its efforts so far, despite naturally wanting more.

"We probably wouldn't have thought that we would have 28 points so far in our first season, but we still do wish that we were a little higher up in the standings," he added.

"We are very close to the teams in front of us and hope that we can keep competing and moving up.

"I am very proud of us, though. We are doing well for our first season [in Formula 1] and the team has been working hard to be where we are."

The Hungaroring is the only circuit on the current Formula 1 calendar where Mercedes has failed to win a race since the sport's latest turbo power unit era began.

Daniel Ricciardo triumphed for Red Bull in 2014, while Sebastian Vettel won for Ferrari in 2015, and Wolff expects Mercedes to be pushed to the limit once more.

"This circuit has not been kind to us over the past two years and it plays to the strengths of our rivals," commented Wolff, as he previewed the event.

"The Red Bull, for example, is a car that functions well where high drag isn't penalized as much. So, in wet conditions and at low-speed circuits such as the Hungaroring, they are a major threat.

"We will need to be flawless to come out on top at this track."

Wolff says that balancing 2016 efforts with 2017, which will mark the arrival of overhauled technical regulations, is adding to the challenge of competing.

"We are entering a time where things are complicated even more by some big decisions to be made," Wolff went on to explain.

"Every week we must analyze how much resource we move across to the 2017 project – but that's a tricky balance.

"Some teams will have stopped 2016 development very early – as early as February maybe, once the current cars hit the circuit.

"That does give them an advantage, as the learning curve is very steep at the beginning.

"If you are a few weeks behind you can find yourselves much further back in the end."

Mercedes has claimed victory at nine out of 10 races so far this season, with Max Verstappen breaking the run by winning on his Red Bull debut in Spain.

Hamilton languished 43 points off the championship lead after Rosberg's early-season charge, but has won four of the past five Grands Prix to close to within a point.

Hamilton's latest victory came on home soil at Silverstone, with Rosberg crossing the line second, before being demoted to third due to a radio infringement.

"It's a wonderful feeling, winning in front of your home crowd; I'm still buzzing from it now and looking forward to carrying those positive vibes into the next race weekend," said Hamilton.

"Ever since the low of [the collision at] Barcelona I've been able to cultivate this really strong mental attitude and I'm really feeling that fire inside me right now.

"Of course, I have good days and bad days like everyone else. But whatever the case, I'm able to turn negatives into positives when it counts.

"It's a track that for some reason has always suited my style and I have incredible support there, so I can't wait to get to out on track," Hamilton went on to comment.

"The past couple of years I haven't had the smoothest weekends in Budapest, of course. But I know I've got the pace, so I'm gunning to turn that around this time."