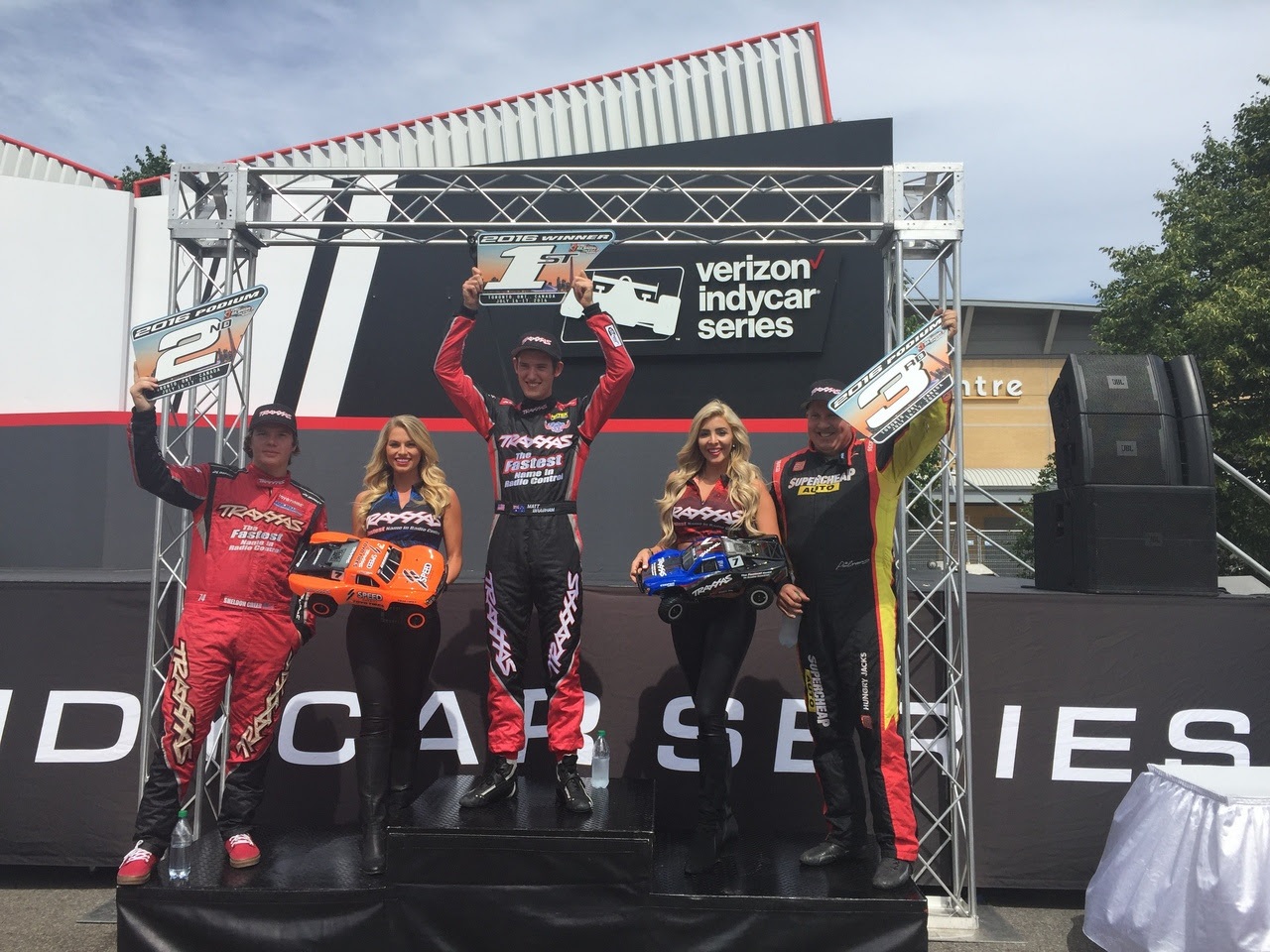 This weekend’s visit to the Honda Indy Toronto would mark the fourth straight year the high flying trucks would visit the highly advanced city just an hour and half North of the United States border. With a small redesign of the fast and technical temporary street circuit that makes up the 11-turn 1.755-mile (2.824 km) street course, many drivers would struggle to hit their marks throughout Friday’s practice session getting into the outside tire barriers.

However, two drivers that would have no issues hitting all their marks and making there way through the field in Saturday’s race would be fast qualifier Matt Brabham of Gold, Queensland, Australia and Alpine, Calif. driver Sheldon Creed the two TRAXXAS drivers aggressively charged past truck after truck from their eleventh and twelfth starting positions to the withstand a plethora of contact and spinning trucks to place themselves in a shootout for the win the final four laps.

After the competition caution waved on Lap-4, Creed and Brabham would make their ultimate move to the front of the field as early race leader Paul Tracy from Scarborough, Ontario, Canada would spin his Royal Purple Synthetic Oil SST in an attempt to avoid the out of control skidding SafeCraft Safety Equipment truck of Singleton, New South Wales, Australia driver Toby Price. Both drivers would spin, allowing the third and fourth running Creed and Brabham to capitalize and claim the top two positions.

The next lap would see Brabham pull his No. 83 truck along side the 2015 SST Champion in a challenge for the lead. Racing side-by-side much of the race circuit Brabham and Creed would alternate the lead five different times three-wheeling through the corners and putting on an absolute display of driving talent setting up a last lap shootout.

The final lap would see the two TRAXXAS drivers go side-by-side all around the Honda Indy Toronto street circuit as the Canadian fans erupted with amazement. Coming to the final corners Brabham pulling ahead of Creed going on to capture his third Stadium SUPER Trucks win of the 2016 season.

Lurking in the distance United Fiber & Data racer Paul Morris of Norwell, Queensland, Australia held the best seat in the house to view the multi-lap duel of TRAXXAS drivers out in front of the field. Morris would not have enough time to catch the leaders, as he would go on to cross the finish line behind Creed in the third position.

After making contact early in the event with Scottsdale, Ariz. driver P.J. Jones, Dustin Scott from Inver Grove Heights, Minn. would recover from spinning, and restarting at the back of the field to place his SPEED Energy/Cobra Transportation No. 20 truck in the sixth position. Jones would follow Scott to cross the finish line the seventh spot.

Making Stadium SUPER Trucks history as the first woman to ever start an SST event, Champion Motocross and UTV racer Sara Price of Canyon Lake, Calif., would drive a consistent and smart race to finish the BitTorrent No. 78 truck in the eighth position.

Early race leader Paul Tracy would encounter more trouble in his quest to get back to the front. Tracy would make contact with 16-year old Toronto native Russell Boyle making whom his third ever SST start driving the KMC Wheels/ NGStone/ Toronto Motorsports No. 93. Boyle would make heavy contact with the Royal Purple Synthetic Oil truck sending it spinning. Tracy would retaliate and spin out Boyle back. The two Toronto native would be credited with the ninth and tenth position in the final run down.

Veteran CART/Champ Car and NASCAR driver Max Papis of Como, Italy making his first ever SST start took the conservative approach in today’s race quickly dropping back from his learning how to get the handle of the truckwas credited with the eleventh position in the SafeCraft Safety Equipment No. 9 after making contact with the wall and falling back in the field.

Back in the United Fiber and Data blue colors this weekend Bill Hynes of Nazareth, Penn. would be credited with the twelfth position.

The SST trucks will return to the Exhibition Place Street Circuit for their second and final round of the Honda Indy Toronto on Sunday at 1:40 P.M. ET in front of an anticipated capacity crowd.