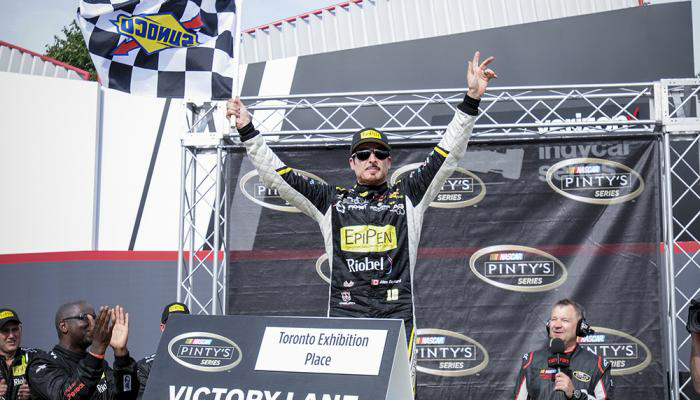 In his first NASCAR Pinty's Series start on the streets of Toronto, Alex Tagliani scored his fourth series win and his second of the 2016 season. Starting on the outside of row one, the Laval, Quebec resident finally took over the lead from Toronto rookie Daniel Morad on lap 25. During the last 12 laps of round 5 of the series, Tagliani managed to hold off 2010 and 2011 Toronto winner Andrew Ranger. A full course yellow on lap 31 tightened the field, but Ranger had to wait for the Green/White/Checkered signal on lap 35 before mounting his final challenge. Despite the pressure from the Roxton Pond, Quebec native, Tagliani kept him at bay until the Checkered flag.

Rookie Kevin Lacroix was the third driver across the finish line to complete an all-Quebec podium. Louis-Philippe Dumoulin of Trois-Rivieres and Kerry Micks of Mount Albert, Ontario rounded out the top 5. In four starts so far this season, Tagliani has won two races and finished another on the podium,

"We had quite a busy week here in Toronto with the promotion with EpiPen, and to top it all off, we won the NASCAR Pinty's Series race on their home ground," said Tagliani who was quite familiar with the Toronto street course from his Champ Car days. "At the start of the race the car was lacking rear grip entering the corner, but the brakes were great. At the halfway point, I started to push a little harder in order to close the gap. Following Andrew (Ranger) and Daniel (Morad) I could see that my number 18 Chevrolet EpiPen/ Riobel/ CanTorque/ Complexe JCP Juste du Pin, was handling better than their cars. When I saw an opening, I went by Ranger first and then Morad. At the end of the race, I was able to hold off Ranger to win the race.

"It was a great race. I'm proud of the Tagliani Autosport team members who worked hard to fix the handling problems we suffered 15 days ago at Circuit ICAR. Right now, a great car makes all the difference in this series because there are so many good drivers around. This is a very important win for the team and for EpiPen. We will do everything to keep this trend going."

Ranger still leads the Driver standings with 211 points, but Tagliani, who missed one race, is now fifth overall with 175 points.

The Pinty's Grand Prix of Toronto will air on TSN 3 & 5 on Saturday, July 23 at 2:30 p.m. The NASCAR Pinty's Series moves west to Edmonton (Alberta) International Raceway and Wyant Group Raceway in Saskatoon, Saskatchewan on Saturday July 23 and Wednesday, July 27, respectively.