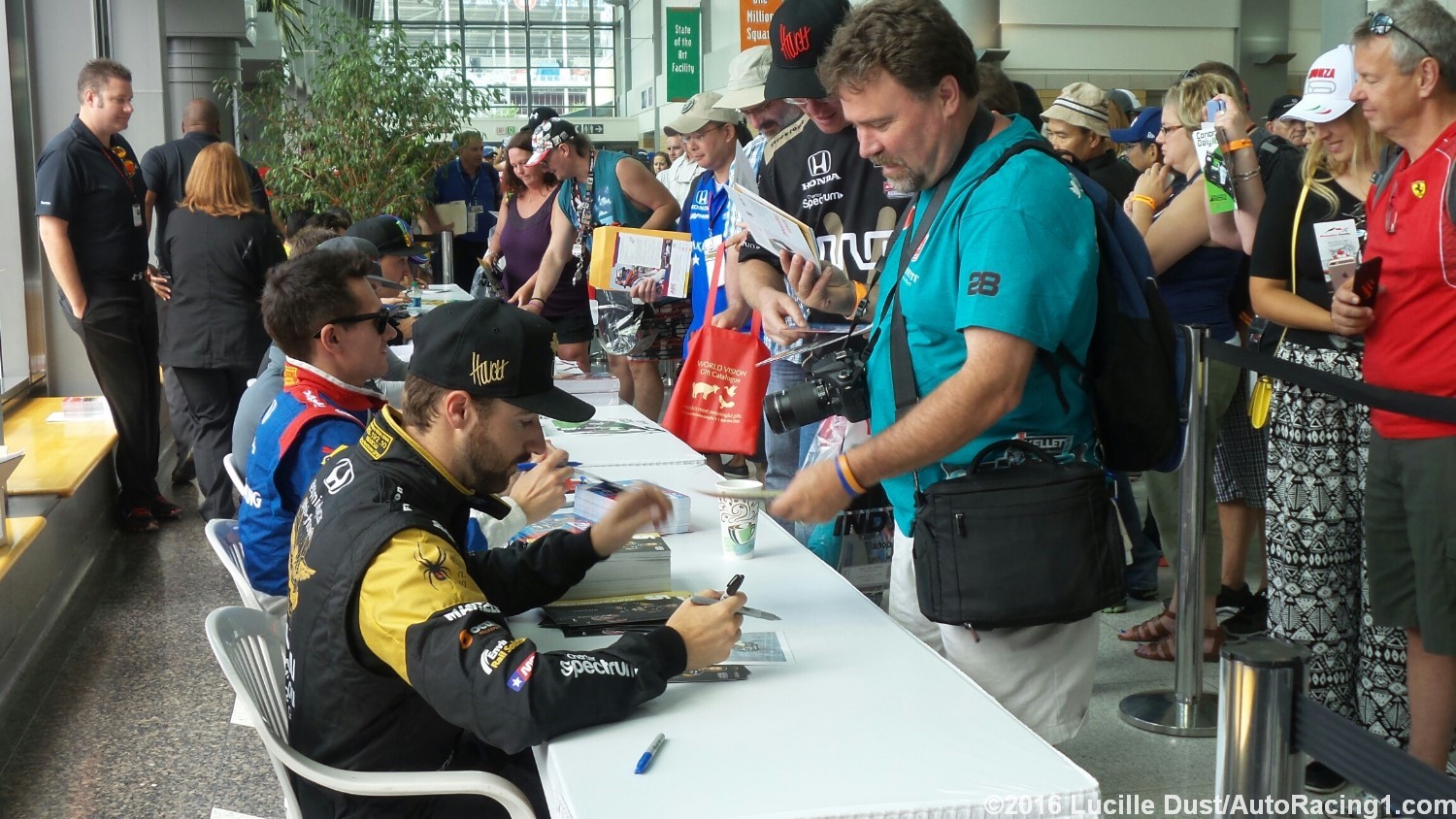 It is still a cool 66 degrees here. The last practice before IndyCars has just finished. The drivers are happy with moving the wall back in turn 8. That will allow for more passing opportunities in turn 9, which used to be a wide sweeping turn.

Paul Tracy, the Canadian hometown favorite during his racing years, is pulling double duty here this weekend. He will not only be in the broadcasting booth with Leigh Diffey and Townsend Bell for the IndyCar race. He will be racing the Stadium Super Trucks.

Tracy, quite possibly the most famous Canadian racer, and 2003 CART/Champ Car Series Champion Paul Tracy, a native of Scarborough, Ontario will make his third attempt in a Stadium SUPER Truck with all of his previous starts coming in front of his hometown Toronto fans. Capturing three victories previously on the Exhibition Place course in 24 starts, Tracy will use his aggressive driving style and track experience to lead the No. 30 Royal Purple Synthetic Oil truck to the front.

Also joining Tracy on the streets of Toronto will be veteran road course racer Max Papis. Hailing from Como, Italy; Papis will use his extensive CART/Champ Car and NASCAR experience to make his first ever start in the identically prepared 650-hp trucks. Driving the SafeCraft Safety Equipment No. 9 there is no doubt that Papis will quickly adapt to unique form of racing the Stadium SUPER Trucks offer sliding through corners and hitting four strategically positioned ramps along the circuit.

The SST race will be run at 3:30 pm, after the IndyCar Qualifying.

The other Canadian favorite, James Hinchliffe is entertaining his many fans as the weekend unfolds. This Friday he was flat out from the first practice session till 7 pm. Today is the autograph session in the Enercare Centre and his many fans anxiously waiting to get his signatures and a chance to talk with him.

During the early years of this race, the paddock was inside the Automotive Building, providing shelter from the weather. The last 20 years, the paddock has been outside and visited by many fans, getting autographs from Walter Payton and Roger Penske. With the pit lane change for this year also brought the Indy Car paddock inside the Enercare building.

IndyCar qualifying is up next at 1:30 pm. Lucille Dust reporting live from Toronto

07/16/16 Good morning from Toronto! The sun is peeking through the clouds and it is 65 degrees right now, with temperatures expected to only reach 74 degrees this afternoon. Not the typical hot and humid weather that we usually have for this race weekend, but a welcome change.

Speaking of change, some track changes were made last night. The wall in turn 8 has been changed to the configuration used in previous years. The inside wall has been placed up on the curbing, giving an additional 6 feet on the inside of the track. The drivers talked about missing the opportunity to pass in that turn because they covered up the curbing.

Also the smooth concrete patching in turns 1 and 9 were sandblasted in an effort to provide more consistent grip.

Today's Pinty's Grand Prix of Toronto is at 3:50 pm. This is the Canadian arm of NASCAR. Andrew Ranger is on the pole for today's race and Alex Tagliani is starting second. You should recognize both of their names because they are former CART/Champ Car drivers.

Ranger, a Quebecer, made his debut in the Champ Car a World Series in 2005 and became the youngest driver in the series' history to finish on the podium. (2nd place, Monterrey, Mexico.) After a few solid finishes at the beginning of the season, Ranger's year went downhill as he mostly struggled in the second half of the season, but held on to 10th in the points championship. In 2006, he remained with the Mi-Jack Conquest Racing team, finishing 10th in the standings with a best finish of 5th at the 2006 Lexmark Indy 300 in Surfers Paradise, Australia.

Tagliani, also a Quebecer, raced in the Champ Car series from 2000, when it was still known as CART, until 2007. He was signed with Forsythe Racing for the 2000 season replacing Greg Moore, a Canadian favorite that was killed in the season ending race in Fontana, California in 1999.

In 2008, Tagliani made the transition to stock cars and began racing in the NASCAR Canadian Tire Series. He also drove for Conquest Racing in the IndyCar Series Detroit Grand Prix, replacing the injured Enrique Bernoldi. Tagliani continued in the seat for the last two races of the season. Tagliani also ran selected races in the NASCAR Nationwide Series, running four races between 2009 and 2012. In 2014, he drove in two races in the series for Team Penske.

Tag talked proudly about the new house that he has been involved in the building of for the past year and a half. He said that many of his sponsors wanted to be included in the project, making his new home a smart house. The house was just finished a week and a half ago and his lovely wife Bronte's parents came for a visit from Australia just after they moved in. Since he is off racing, she calls him to ask which button she needs to push to do something!

Yesterday the French drivers talked about the tragedy in Nice, France where terrorist mowed down so many people celebrating Bastille Day with a truck.

Sebastien Bourdais, from LeMans, France, did not hold back in his reaction to the terrorism that claimed dozens of lives in France.

"It's obviously a tragedy, but it's getting to the point where it's not even a surprise anymore," said Bourdais. "It's just human insanity, and I don't know what's possible to do, obviously. It's, I think, time for politicians to step up and do something pretty radical about the way we let people radicalize themselves because it's getting absolutely crazy out there."

Added Pagenaud, who hails from Montmorillon, France: "Obviously it's really painful. I'm far away from home. I'd like to be there to just feel the pain and be there with my country and my friends. The atrocity of the act is incredible, especially on Bastille Day."

IndyCar practice is at 9:45 am and the Firestone Fast Six qualifying is at 1:30 pm.

I will update you as the day unfolds… Lucille Dust reporting live from Toronto.