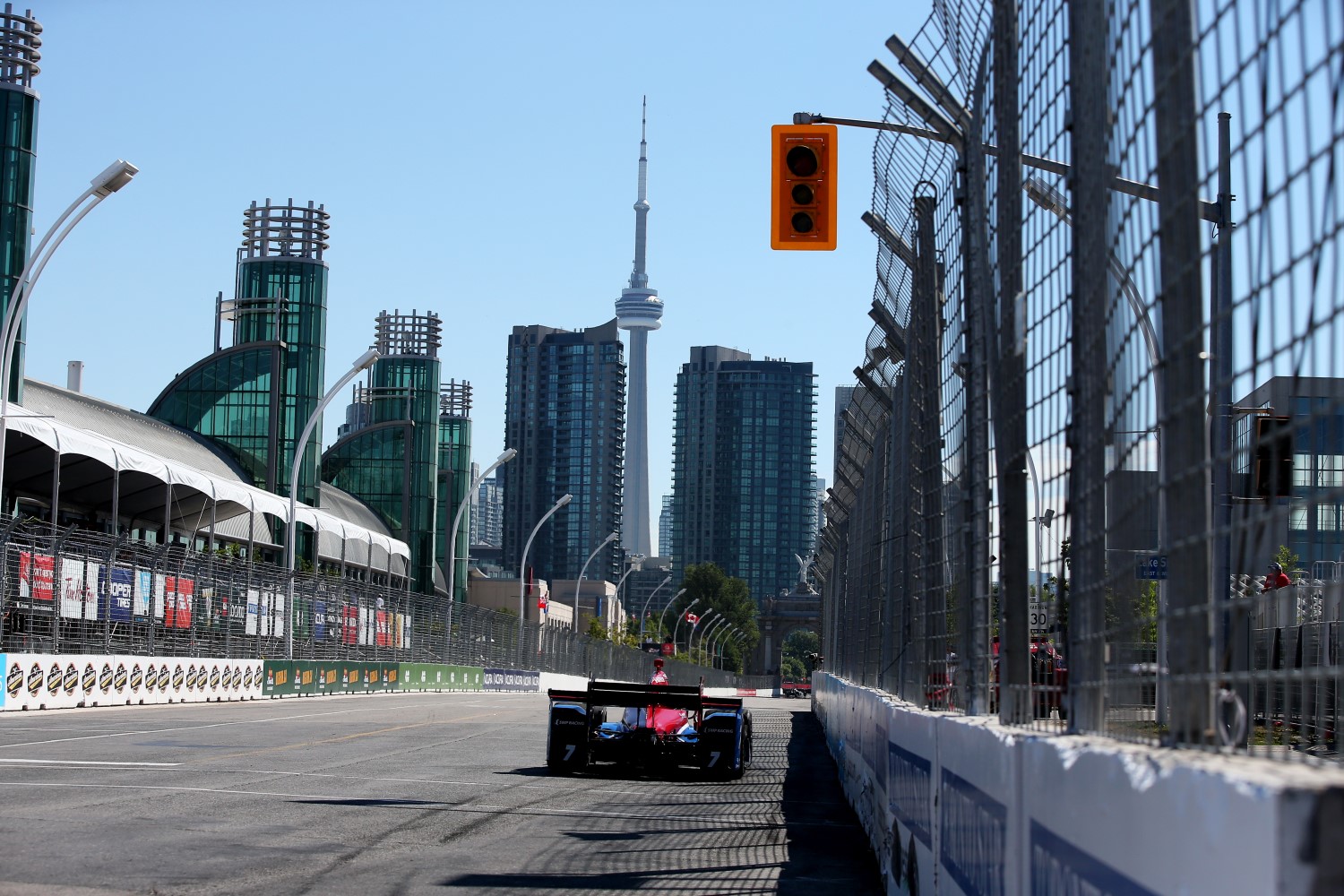 Timing is everything. And holding the Honda Indy this weekend as compared to last year's mid June date has proven that. There are families and children walking around enjoying the racing and the food venues. Heaps of young children under the age of five. A local explained that school does not finish up until late June, which impacted the attendance last year. Also today is free Friday and in lieu of an admission fee, you can donate to Make a Wish Foundation as you enter the gates.

Well the first practice session went well with the new layout of the track. Turns 8 through 11 have been reconfigured to accommodate the new inside pit lane. It has actually made the track slower. And the new pavement is bumpier than previous years due to the harsh Toronto winters and the promoter not bothering to diamond grind the surface.

Earlier today, I asked Team Penske's Will Power what he thought of the track after the first practice. "It's good. Very challenging. It is actually not that bumpy. There are bumps on the braking zone, but smooth on the back straight. It's very technical, this new section. Actually the setup is almost the same from last year. The last sector just went down a gear. Instead of being in 4th, you are in 3rd gear."

"I am fine with pit lane", the Aussie continued. "As bad as you guys think it looks, it is actually……I think it is going to be interesting. People coming out while you are coming in is very difficult to call. It is actually wide, better than Long Beach where you don't have 2 lanes."

Simon Pagenaud' the series points leader, added his thoughts on the new layout. "We are never use to changes, but personally I enjoy it. Pit entrance is a bit of a new challenge, for sure. The first year we do the new layout, there is always going to be challenges. On the race track itself, I find it more exciting than before. I like the fact that turn 10 is off camber which is a new feature that we don't have on any other tracks. I like turn 11, that's blind and you have to be very precise and very committed. So I should enjoy it a lot more than before. You might not hear that from everybody, but I like the changes and I like what they did."

I asked about the bumps on the track and Pagenaud answered, "No, not really. I guess the Penske dampers are really good. The track is not more bumpy than any other street course we go to. I enjoy the last section. I found it a lot more exciting and a lot more fun to drive than before, you have to be so precise and so close to the wall. I think it's great. It does not look great but it is actually a lot of fun to drive. Our job is to be precise and show our skills. We are not F1 drivers on super smooth tracks. That is not IndyCar."

Juan Montoya and Helio Castroneves agree that the new section of turns 8 through 11 are not only narrower but slower. Montoya commented, "I used to be flat in 4th gear but now it is 2nd or 3rd gear in the last turn. It is challenging. It is going to make it pretty hard. I think going out of the slower corners might be a little different. It will be interesting to see how that last corner on to the main straight is going to be in traffic. Following people might be really tough."

Helio Castroneves, who is 5th in the points race, added this about the narrow turn 11. "And two wide. We have to go two wide for the start of the race."

The pit boxes are also very tight with the changes. Montoya commented, "They are about the same size as the Mid Ohio pits. But the harder thing is that you are turning all the time. My pitbox entrance is on a curve, it is really hard to get it straight in the pitbox. I managed to get it straight two times and I was celebrating."

Castroneves added, "If you want to stop on your mark, it will be very hard. But the drivers are going to have to adapt."

The rain held off for the second practice that has just finished. Montoya managed to move the wall in turn 11 a bit. And ruin a front and back wing in the process. Charlie Kimball, Ganassi Racing entry number 83, also managed to brush the wall and damage his front wing.

34-year-old former IndyCar driver Brazilian Rafael Matos is making the rounds in the Honda Indy Toronto paddock this weekend, coaching Cameron Das of JAY Motorsports in the Cooper Tires USF2000 Championship Powered by Mazda series (Das is a 16-year-old rookie out of Baltimore) and hoping to reinstall himself as a member of the IndyCar paddock.

“Yeah, I’m here coaching this 16-year-old this weekend," Matos told NBC Sports. “It came up last minute and we only met this weekend.?