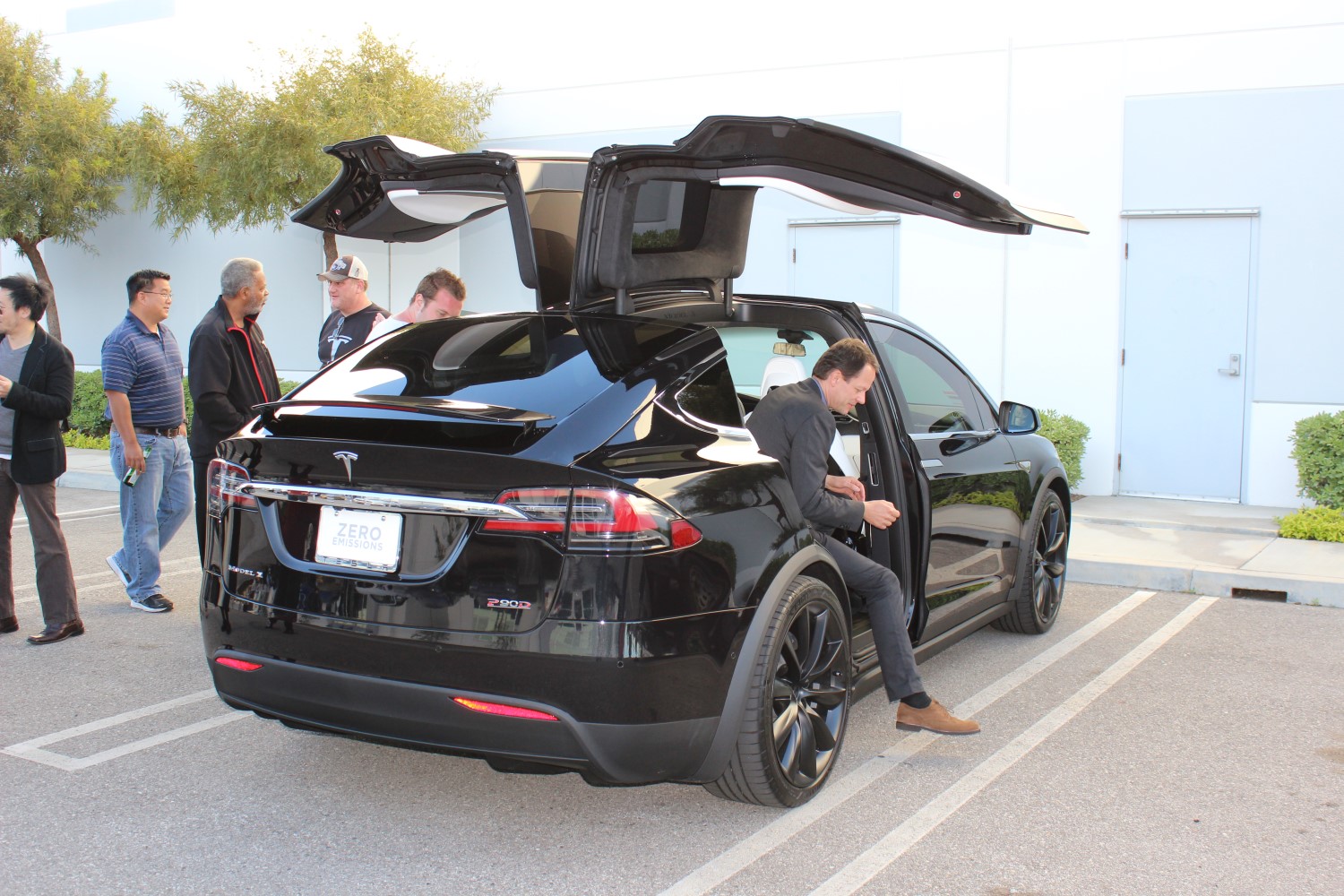 With eviscerating Tesla's Autopilot software becoming something of a fad lately, Elon Musk took to Twitter today and shed some light on a recent Model V crash in Pennsylvania. If you recall, a Model X driving along the Pennsylvania Turnpike rammed into a guard rail last week, an incident which then resulted in the car crossing over a few lanes before crashing into a concrete median and rolling onto its roof. Notably, early reports indicated that the Model X had its Autopilot feature turned on at the time of the crash.

As it turns out, Autopilot had nothing to do with the crash. According to Musk, the Model X's logs reveal that the car's Autopilot software was, in fact, not activated when the accident occurred.

Interestingly, Musk adds that the crash wouldn't have occurred if Autopilot was turned on.

Musk's tweet comes at an interesting time for Tesla. Following the May 7 death of a Model S driver who, with Autopilot engaged, crashed into a tractor-trailer, much has been made about the technology, with Consumer Reports just this week arguing that Tesla should disable it completely until it improves.

Tesla, meanwhile, has no intention of doing any such thing. On the contrary, Tesla said that it will be more upfront about the technology's limitations and will publish a blogpost to that effect shortly. Incidentally, Tesla also makes a point of noting that the incidence of fatalities with Autopilot software engaged is much lower than in cars that don't have it.

"We got access to the logs. Data from the vehicle shows that Autosteer was not engaged at the time of this collision. Prior to the collision, Autosteer was in use periodically throughout the approximately 50-minute trip. The most recent such use ended when, approximately 40 seconds prior to the collision, the vehicle did not detect the driver???s hands on the wheel and began a rapidly escalating set of visual and audible alerts to ensure the driver took proper control. When the driver failed to respond to 15 seconds of visual warnings and audible tones, Autosteer began a graceful abort procedure in which the music is muted, the vehicle begins to slow and the driver is instructed both visually and audibly to place their hands on the wheel. Approximately 11 seconds prior to the collision, the driver responded and regained control by holding the steering wheel, applying leftward torque to turn it, and pressing the accelerator pedal to 42%. Over 10 seconds and approximately 300m later and while under manual steering control, the driver drifted out of the lane, collided with a barrier, over corrected, crossed both lanes of the highway, struck a median barrier, and rolled the vehicle."

07/14/16 The Pennsylvania State Police cited the driver of a Tesla Model X involved in a crash in Pennsylvania for careless driving, Crain's Detroit Business reports. Albert Scaglione, 77, was the driver in the July 1 crash that took place on the Pennsylvania Turnpike in which the Model X, with the semi-autonomous Autopilot system reportedly engaged, struck a concrete median barrier and veered across several lanes of traffic, eventually coming to a stop on its roof. Scaglione and a passenger were injured.

The National Highway Traffic Safety Administration is investigating the crash, which Tesla did not explicitly link to the Autopilot system. The automaker only stated that it was notified when the airbags in that Model X deployed, but it had not collected other data from the vehicle's computers due to damage to the vehicle. The NHTSA is still trying to confirm whether Autopilot was in operation, though the Detroit Free Press is quoting a police officer saying that the driver told him that the system was engaged at the time of the crash.

The July 1 crash was the second incident involving a Tesla in which Autopilot use was suspected, but it is the first to result in a charge against the driver.

A Tesla Model X was in a single-car crash in Montana on Sunday, with the vehicle's semi-autonomous Autopilot system — as in other cases — believed to be involved.

Section 3714 of Title 75 of the Pennsylvania code states: "Any person who drives a vehicle in careless disregard for the safety of persons or property is guilty of careless driving, a summary offense." The statute provides for a fine of $250 in cases of serious bodily injury that results from the unintentional violation of the statute, which the code defines as "any bodily injury which creates a substantial risk of death or which causes serious, permanent disfigurement or protracted loss or impairment of the function of any bodily member or organ."

The Pennsylvania State Police has not released any statement accompanying the charge and has not indicated whether Scaglione kept his hands on the steering wheel as Tesla instructs users of the Autopilot system.

But the charge does suggest that the driver's actions, rather than road conditions or contact with another vehicle or piece of debris, are suspected to be the main factors in the crash.

Tesla responds to death of autopilot driver. Tesla Motors revealed Thursday it was investigating a crash involving a Model S EV in Autopilot mode that resulted in the death of an Ohio man on May 7 of this year. Joshua Brown, 40, …

"It is important to note that Tesla disables Autopilot by default and requires explicit acknowledgment that the system is new technology and still in a public beta phase before it can be enabled," Tesla said in a statement following the fatal Florida crash involving a Tesla Model S. "When drivers activate Autopilot, the acknowledgment box explains, among other things, that Autopilot 'is an assist feature that requires you to keep your hands on the steering wheel at all times' and that 'you need to maintain control and responsibility for your vehicle' while using it." AutoWeek

A Southfield art gallery owner told police his 2016 Tesla Model X was in Autopilot mode when it crashed and rolled over on the Pennsylvania Turnpike last week. The crash came just one day after the National Highway Traffic Safety Administration issued a report on a fatal crash in May involving a Tesla that was in self-driving mode.

Albert Scaglione and his artist son-in-law, Tim Yanke, both survived Friday's crash near the Bedford exit, about 107 miles east of Pittsburgh.

The Free Press was not able to reach Scaglione, owner of Park West Gallery, or Yanke, but Dale Vukovich of the Pennsylvania State Police, who responded to the crash, said Scaglione told him that he had activated the Autopilot feature.

In his crash report, Vukovich stated that Scaglione's car was traveling east near mile marker 160, about 5 p.m. when it hit a guard rail "off the right side of the roadway. It then crossed over the eastbound lanes and hit the concrete median."

After that, the Tesla Model X rolled onto its roof and came to rest in the middle eastbound lane. A 2013 Infiniti G37 driven in the westbound lane by Thomas Hess of West Chester, Pa., was struck by debris from the Scaglione car, but neither he nor his passenger was hurt.

Vukovich said he likely will cite Scaglione after he completes his investigation, but he declined to specify the charge.

Anyone who has driven on the Pennsylvania Turnpike knows that its narrow shoulders and concrete medians leave little margin for driver error. There's not enough evidence to indicate that Tesla's Autopilot malfunctioned.

Last Wednesday, NHTSA announced it is investigating the design and performance of the Autopilot system after a 40-year-old Canton, Ohio, man died May 7 in Florida when his 2015 Tesla Model S hit a tractor-trailer while in self-driving mode, The federal agency said both the driver and the Autopilot system failed to detect the large tractor-trailer making a left turn in front of him.

But the driver of the truck said there was a Harry Potter video still running when the Tesla came to a stop about a quarter-mile from the impact.

Tesla says that before Autopilot can be used, drivers have to acknowledge that the system is an "assist feature" that requires a driver to keep both hands on the wheel at all times. Drivers are told they need to "maintain control and responsibility for your vehicle" while using the system, and they have to be prepared to take over at any time.

Autonomous vehicle advocates argue that over time they can make a quantum improvement in safety. But regulators must operate in the present.
Last month at a conference in Novi, NHTSA chief Mark Rosekind argued that technology like Autopilot should be twice as safe as the manual systems they replace.

The other risk illustrated in the Florida crash is the tension between what automakers call automated driver assist features, such as emergency braking, lane departure alert and adaptive cruise control, and a more daring level of autonomy that is touted as allowing occupants to text, e-mail, watch movies and otherwise disengage from driving. Detroit Free Press