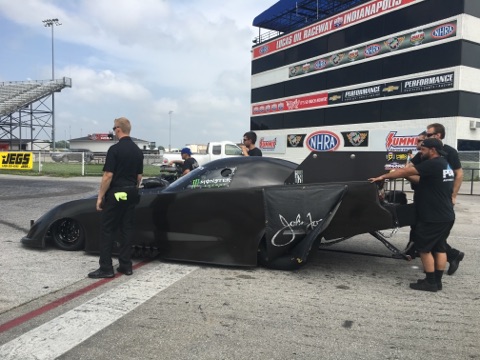 “We are just working through some issues that have been causing us problems the last three or four races. We were on the road the whole month of June then we had July 4th and another race the next weekend in Chicago. There were some issues we needed to address but this was the first time in six weeks we had a chance to work them out. We had a lot of success these past two days and we burned up a lot of nitro in this PEAK Camaro and that Monster Energy dragster," said John Force.

Brittany Force and the Monster Energy team have two wins and have held firmly to their No. 4 position in the Mello Yello point standings but the team felt there were some opportunities to improve on their performance. So far this season John Force has raced to a final round and maintained his position in the Top Ten. The 143-time winner is not satisfied with this performance nor is he passing the blame on to anyone on his team.

"The buck stops with me. I have been trying to spend more time with my team because that is what I love the most. I love driving this hot rod. There are a lot of other things I have to do that are important and I enjoy that stuff. My race car does the running for me and I have to give it my all to win out here. I have a lot of winning left and like I told the media in Chicago I haven’t reached my peak yet," added Force.

John Force is the only Funny Car driver to ever sweep all three Western Swing races and the 16-time Funny Car champion feels his Jon Schaffer led team is due for a win and maybe another shot at Western Swing history.