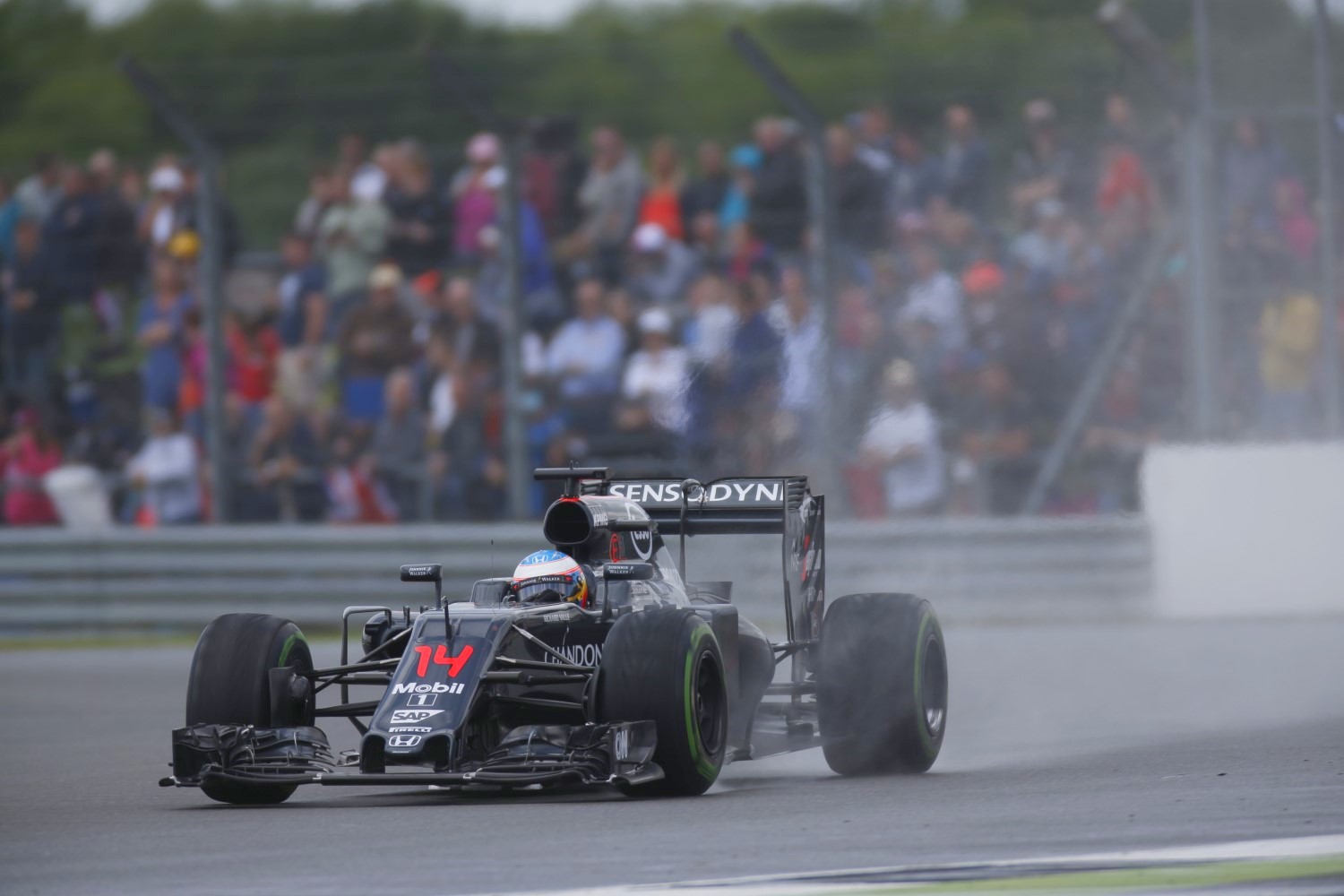 Fernando Alonso put McLaren-Honda at the top of the timesheets on the opening day of the second in-season test session at Silverstone, which began in dry conditions before rain arrived midway through.

Alonso led from the early stages and worked his way down to a 1:31.290 on the Super Soft tyre, which put him over 1.5s clear of the field.

As the drivers entered the lunch break, rainfall arrived, and continued through the afternoon, which prevented any lap time improvements.

Esteban Ocon, on Mediums, was next up, and the most productive driver of the day with 123 laps, as he carried out his first test for Mercedes.

Ocon had been scheduled to drive on the final day of the first in-season test session in Barcelona, but Mercedes called on Pascal Wehrlein to trial new car parts.

Alex Lynn received his second outing of the season in the Williams FW38, in his role as development driver, finishing a further 1.5s down on Alonso's pace-setting effort.

Charles Leclerc had a quiet start to the day on his official Ferrari test debut, working through aero runs, but produced a time strong enough for fourth just before lunch.

He was restricted to 19 laps overall, due to a power unit issue.

Nikita Mazepin completed his first ever laps in Formula 1 machinery with Force India, after gaining extensive simulator mileage, and rounded out the top five positions.

Carlos Sainz Jr. was the next full-time driver on the timesheets, behind fellow Spaniard Alonso, with the pair the first to brave the wet conditions in the afternoon.

Most teams were reluctant to send their cars out early in the afternoon session, as they completed required set-up changes and saved wet-weather tires.

Santino Ferrucci was another debutant as he tested with Haas, the American hitting a race distance in the morning session alone en route to seventh place.

Ferrucci completed the 300km required for a Super License.

Wehrlein spent time running prototype elements for tyre supplier Pirelli, in Mercedes' F1 W05 Hybrid from the 2014 season, without knowledge of what he was testing.

Wehrlein, who races for Manor, was the last of a six-strong pack of drivers in the 1m34s lap time bracket, and did not complete a lap in the wet weather conditions.

Rio Haryanto, the only other race driver in action, followed in ninth, with Renault tester Sergey Sirotkin and Red Bull youngster Pierre Gasly bringing up the rear.

Sirotkin, who ran in FP1 in Russia, had lengthy spells in the pits amid set-up changes, while Gasly ran a halo device but managed only seven laps before lunch.

No drivers were involved in incidents over the eight hours of testing, with only one red flag signaled, when a block of wood fell off the start gantry in the afternoon.