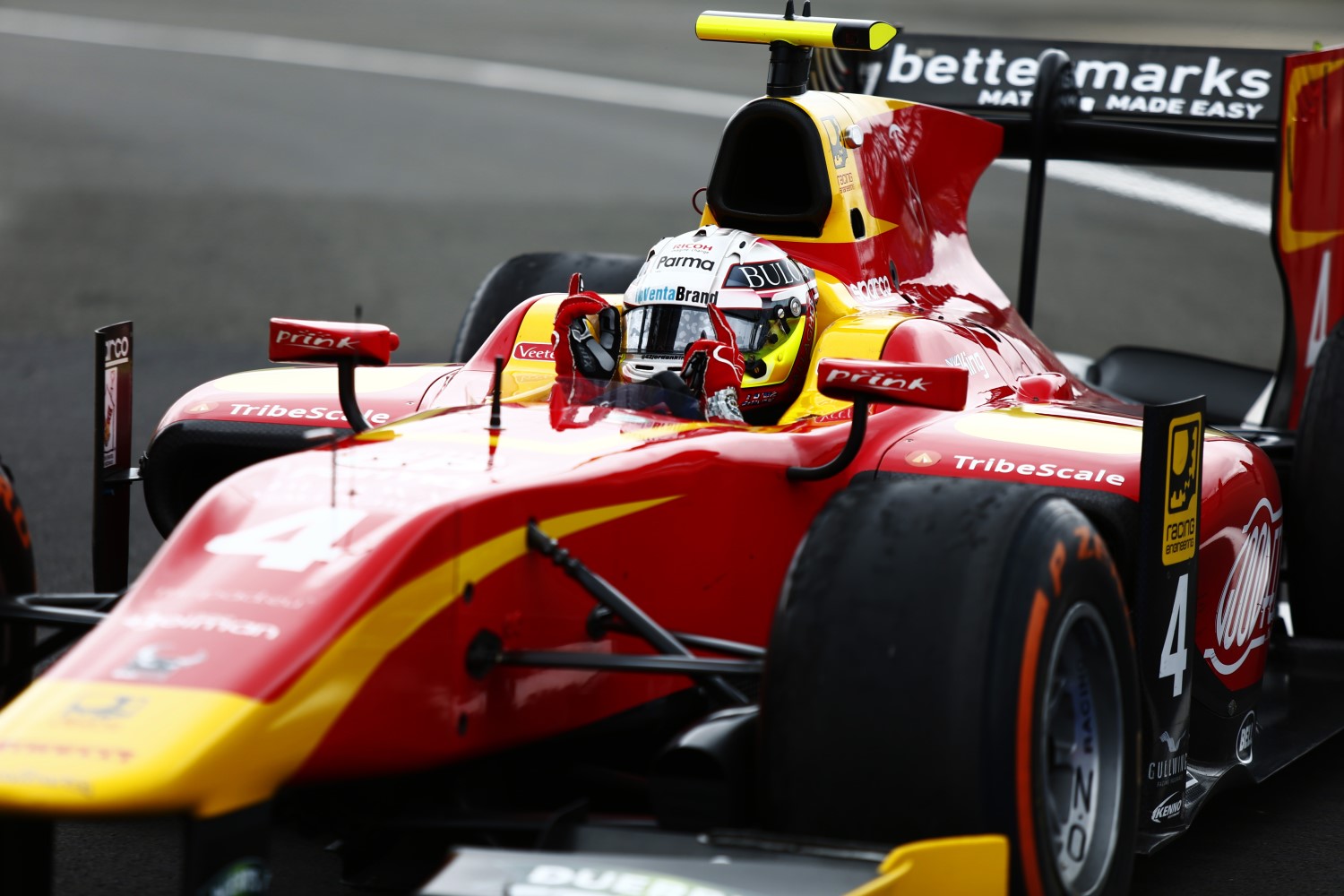 Jordan King delighted the local fans by winning this morning's sprint race at Silverstone from pole, looking to initially have the race under control before a brief shower on the last lap meant the Briton had to work hard to hold on for victory from a fast charging Luca Ghiotto and Oliver Rowland.

The race opened under heavy clouds but on a dry track, and when the lights went out King did enough off the line to convert pole into the lead at Turn one, but fellow front row starter Norman Nato was unable to match his teammate, losing out to Nobuharu Matsushita and Rowland into Turn one ahead of Ghiotto, Mitch Evans, Antonio Giovinazzi and Raffaele Marciello, while yesterday's winner Pierre Gasly lost ground and dropped back to P12 by the end of the lap.

While King stormed off into the distance Ghiotto was setting the pace, and behind him the PREMA Racing teammates were also on a charge: by lap six Gasly had gained two places and Giovinazzi dispensed with Evans after a brief duel. Nato was unable to match his teammate's pace: the Frenchman lost out to Rowland and Ghiotto in consecutive laps, and the Italian's spectacular run saw him dislodge the Briton from a potential podium by lap 8. Ghiotto was clearly faster than everyone on track, and within two laps he dispatched Matsushita and was heading after the leader.

The Italian threw everything at King, who held on by his fingernails ahead of his local fans: with 4 laps remaining Ghiotto's times were increasing, and it looked like the Manor Development Driver had done enough to see of his rival. But as the race drew to a close the conditions worsened, causing chaos: Matsushita ran deep at Brooklands to allow Rowland through, Nato ran into the gravel and retirement, and Evans lost time (and places) to his pursuers.

Back at the front Ghiotto could sense blood and he pounced: the Italian scooped up all the seconds he lost and was all over the rear of King for the final sector, but the Briton hung on to win his local race by just 0.5s from a bitterly disappointed Ghiotto. Rowland repeated his countryman's efforts by denying Giovinazzi a podium by just one tenth, while Matsushita came home behind the pair in P5. Marciello brought home more points in sixth, while Gasly capped a solid recovery to finish in the points ahead of 8th placed Marvin KirchhÃ¶fer. Sergio Canamasas and Nicholas Latifi completed the Top ten.

Rowland's double podium at his home event puts the Briton into the lead of the drivers' standings with 79 points to Giovinazzi's 78, ahead of Gasly on 74, Marciello on 72 and Evans on 70, while in the teams' title battle PREMA Racing leads the way on 152 points ahead of Racing Engineering on 129, RUSSIAN TIME on 127, Pertamina Campos Racing on 94 points with ART Grand Prix on 86 and MP Motorsport on 85 as they look towards the next event in Budapest in just two weeks time.