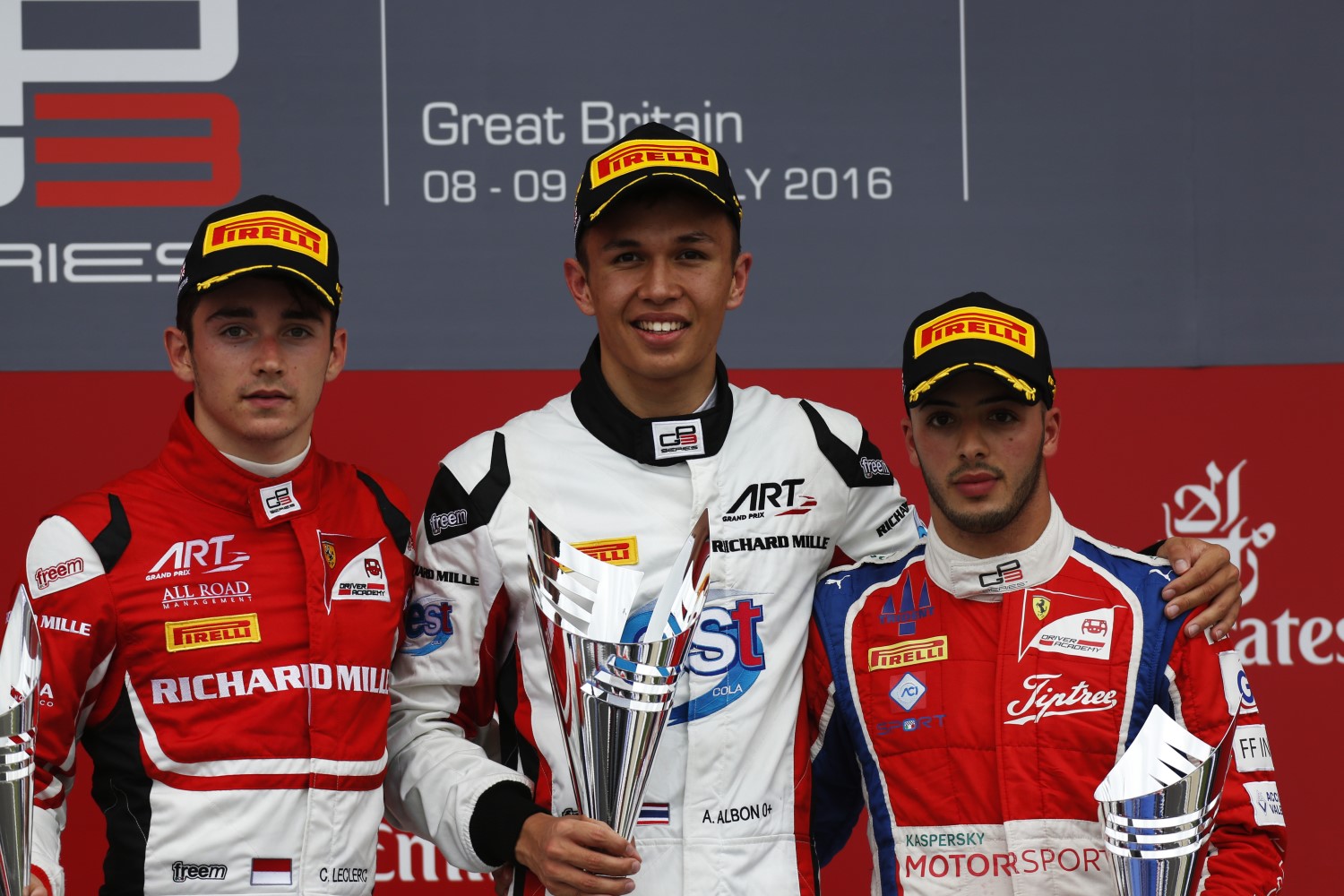 Thai rookie Alexander Albon had the perfect day in Silverstone: it started with claiming his maiden pole and finished with a fantastic win and fastest lap; his second win of the 2016 GP3 season. Albon has now moved into the lead of the drivers’ standings over his ART Grand Prix teammate Charles Leclerc who battled hard from P7 to finish second, and was hot on Albon’s tail at the end of the race. Trident’s Antonio Fuoco completed the podium.

It was dry but cool conditions ahead of the forty-minute race with Trident’s Sandy Stuvik joining Albon in all Thai front-row. Albon remained calm at the start and made a clean getaway to maintain the lead of the race ahead of Stuvik with Koiranen GP’s Matevos Isaakyan up to third. Ferrari Driver Academy’s Fuoco wasted no time; passing the Russian on the inside on lap 2 to move into third.

On lap three there was contact between ART Grand Prix’s Nyck de Vries and Nirei Fukuzumi at Turn 6; the two continued but the Dutchman was issued with a 5s time penalty to be added to his race time. Scuderia Ferrari Team development driver Leclerc picked off Isaakyan and then set his sights on Fuoco. At this point, Albon had built up a 4s lead back to Stuvik, with Fuoco, Leclerc and DAMS’ Jake Hughes close in pursuit.

On lap eight, Fuoco overtook his Stuvik for second with Leclerc and Hughes repeating the move a lap later. Several laps later, Fuoco and Leclerc enjoyed a hard wheel to wheel dice with the Monegasque driver just getting the better of the Italian and jumping into P2.

Leclerc quickly reduced the deficit between him and Albon to 3.6s as he charged after his teammate. Hughes’ home race sadly did not go to plan after he had to retire in the pitlane with a damaged rear wing. Koiranen GP’s Matthew Parry was a busy man and on the move for most of the race. On lap 13 he passed his teammate Isaakyan and then Stuvik to move up to fourth place. Isaakyan was shown the black and orange flag and had to pit which dropped him outside of the points after a strong showing earlier in the race.

Albon’s lead was down to 2.1s with the Thai ace looking confident and controlled as the laps ticked down. There was frenetic action until the checkered flag with Ralph Boschung and Artur Janosz overtaking Stuvik for sixth, whilst Albon’s margin back to Leclerc was now 1.5s.

There was a titanic tussle further down the order with Arden International’s Jake Dennis passing Campos Racing’s Alex Palou for ninth; the Brit then harassed Stuvik who had dropped to P8 and had the all-important reverse pole for tomorrow’s race. On the final lap, Dennis in front of his home fans fired past the Trident driver to claim eighth and reverse pole.

At the checkered flag, the day belonged to Albon who was overjoyed to record his second win of the campaign and deny Leclerc victory. Fuoco bagged yet another rostrum showing his consistency ahead of Parry, De Vries, Boschung, Janosz, Dennis and Stuvik. Jenzer Motorsport’s new recruit Arjun Maini pocketed the final point on offer on an impressive debut.

Albon now leads the Series over Leclerc by eight points with Fuoco, De Vries and Boschung completing the top five. Following their one-two, ART Grand Prix have a mammoth advantage in the teams’ standings over Trident in second and Koiranen GP in third.