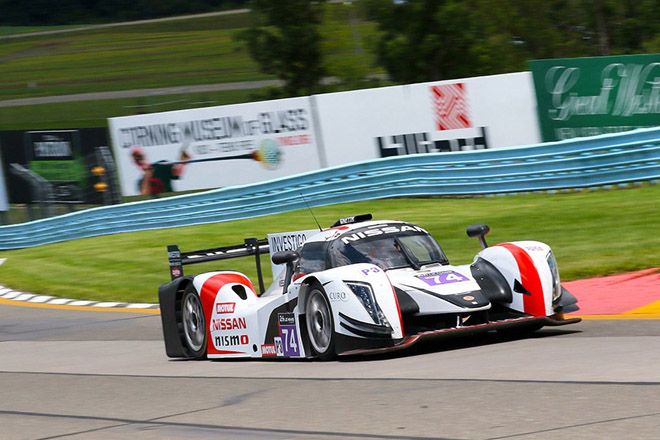 IMSA competitors have voiced mixed views over the proposed integration of LMP3 cars in the Continental Tire SportsCar Challenge, a move that could happen by as early as next year.

The entry-level prototypes, which have quickly become a success in Europe, have been targeted by IMSA as one of a handful of potential platforms it is evaluating for the future.

While having been suggested as a potential replacement for the Prototype Challenge class in the WeatherTech SportsCar Championship, signs are currently pointing towards the Continental Tire Challenge instead, in what would be a third category alongside revised GS and ST classes.

“My gut tells me that it’s not part of the traditional DNA of the series," Compass360 Racing team owner Karl Thomson told Sportscar365.

“[Continental Tire Challenge] is street stock and even if street stock cars are starting to go away and we’re having more manufacturers build GT4 and potentially TCR cars… That fits the DNA historically for me.

“I think LMP3 is interesting and we do need to find a place for it. Whether that’s here or in it’s own series, I think that’s still up for discussion."

Thomson, a longtime Continental Tire Challenge competitor, feels the similar operating costs between LMP3 and GS could come as a further detriment to the class.

“The series feels that LMP3 cars will be substantially more expensive than a GT4 car to run," he said. “I think that might depend on the platform you chose, what you’re getting from the manufacturer.

“In my opinion it will probably be closer [to GT4] in running costs. That may be a problem.

“If you have the choice between running a Mustang or a prototype, which looks like a spaceship, and they cost similar money to run… that is going to hurt the GS class."

GS has already taken a significant hit in car count in the last 24 months, with only eight cars taking part in last weekend’s Continental Tire 150 at Watkins Glen.

While IMSA is poised to adopt full GT4 regulations next year, in a move to revive the GS class, WeatherTech Championship team owner Peter Baron doesn’t feel LMP3 would take away from the allure to the production-based class.

“I know GS guys are saying it’s a class killer but it’s no different than GTD, which is much more expensive than PC class," Baron told Sportscar365.

“There’s still massive numbers in GTD because there are just guys that inherently like GT programs that manufacturers are more behind GT and the [level of] support there.

“Historically, guys come up a GT route or they come up a prototype route. Normally they don’t cross over. I’m not at all worried about that."

As a prototype entrant, Baron sees the benefit in fielding cars in multiple series over a weekend and admitted a strong interest in expanding into Continental Tire Challenge should LMP3 be added.

“It’s a great thing to do," he said. “Because then you can have a group of guys here… like the deadman, the tire passer, the fuel or the fire bottle guy, and the fuel rig and all that equipment.

“You can race [Saturday] and [Sunday] if you can get a car running in Conti. So we’re definitely looking at that.

“As soon as there’s some announcement made about that, whether it is a spec class or what’s going to happen with that, we’ll make some decisions."

Sean Rayhall, who is taking part in this year’s European Le Mans Series in the thriving LMP3 class, believes adding the platform to Continental Tire Challenge is a no-brainer.

“I’m looking at social media and a lot of people are saying stuff about P3 cars that are negative," Rayhall told Sportscar365.

“For me, after driving the P3 car, especially with young and gentlemen prototype drivers that want the in-between step, it’s the epitome of a perfect car.

“It has a lot more sensation than a PC car, in regards to what it gives you for a feeling. I can relate to drivers that I’m coaching on what the car is doing and they can know what’s going on.

“You need endurance racing, you need the practice of pit stops and you need all these little things that [Continental Tire Challenge] offers but [the series] hasn’t offered to a prototype, until now.

“There’s speed discrepancies that will be addressed. But the cars aren’t here [yet]. So let’s let IMSA do their job and they’ll always take care of it as they’ve done."

Others, such as 2015 GS champion Robin Liddell, are indifferent about the addition of LMP3, but as long as IMSA thinks long and hard at the long-term effects, according to the Scotsman.

“It’s one thing to bring LMP3 in and put it in [Continental Tire Challenge]. What concerns me is where that series is headed in general terms," Liddell told Sportscar365.

“It concerns me that the powers that be have gone to Europe, looked at LMP3 and even looked at how they might bring those cars in the WeatherTech Series for the long races, which I happen to think is a horrible idea.

“Frankly I think they need to demonstrate some leadership and strategic direction going forward. And then we will all buy into the idea the concept, whatever that may be, GT3, GT4, LMP3… in either series.

“That leadership and direction is really critical. I hate to say it but I think it has been lacking since the merger."

IMSA President and COO Scott Atherton stressed that no decision has been made on the LMP3 front and admitted that it’s not only being evaluated for Continental Tire Challenge but other series as well.

He said it includes the possible integration into the WeatherTech Championship, Mazda Prototype Lites and some “hybrid" options in other established IMSA-sanctioned series.

“I’m confident that if we don’t do something meaningful [with LMP3], someone else will and we certainly don’t want that to occur," Atherton told Sportscar365. “But we also don’t want to take a ready-fire-aim approach.

“There may be some frustration that we’re not making quicker decisions but I rather take longer to get it right than move it quickly and wish we hadn’t."

Should LMP3 be integrated to Continental Tire Challenge, Atherton said it would achieve the concept of having a “mirror image" to the WeatherTech Championship with one Prototype class and two GT-based categories in both series by 2018 once the current-spec Prototype Challenge car is discontinued.

Adding LMP3 to the Tequila Patron North American Endurance Cup rounds only, as suggested by some competitors, “wouldn’t be the first choice" according to the IMSA boss.

Atherton said they hope to be in a position to announce class structure and new platforms by the Road America weekend next month, although he admitted the timing may end up being a bit optimistic as they continue to get feedback from stakeholders.

For now, the debate within the paddock continues.

“I think everyone needs to hold their horses, let IMSA do their thing and watch it grow," Rayhall said of the LMP3 platform.

“We have a 22-23 car count in ELMS, which is unheard of for prototype racing. There’s a science there that has to be added in America." John Dagys/Sportscar365