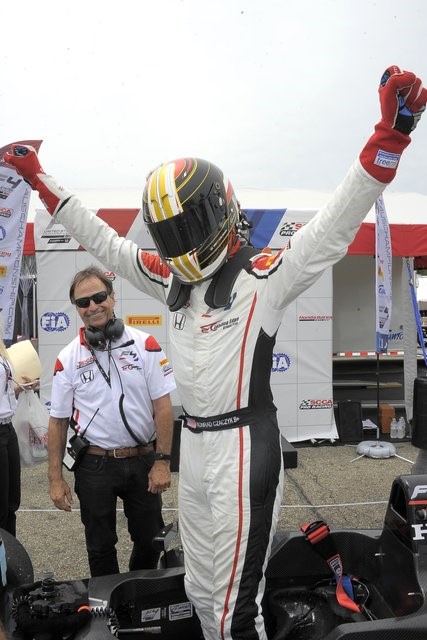 Konrad Czaczyk of Loxahatchee, Florida, dominated the inaugural race weekend of the Formula 4 United States Championship powered by Honda, winning all three races at the Mid-Ohio Sports Car Course on Saturday and Sunday.

“We had a rough start to the weekend after placing fifth during qualifications Friday," Czaczyk said. “The weekend quickly improved by winning the entire race weekend, sitting on the pole and successfully completing my first standing start. This is my first time competing in a car, and my team and I couldn’t have asked for a better start of the season."

Czaczyk, driving the black 47 Leading Edge Grand Prix car, sat on the pole for the first time during race three, pacing a fast lap time of 1:26.463 during race two. Grid position for the second and third event of the weekend was decided by the fastest lap finished during the previous race.

In the third race, with four minutes left in the 30-minute session, Austin Kaszuba of Burleson, Texas, lost a front wheel, causing him to go off course. In an unrelated incident, Kaszuba’s teammate, Michael Goodyear of Carmel, Indiana, had an unaided accident near Kaszuba causing double-yellows to be thrown and safety vehicles sent.

The green flag did not return for the duration of the race, and Czaczyk seized the top podium spot under double-yellow conditions, capturing his third win of the weekend. Kirkwood finished second for the third time during the event weekend with Raphael Forcier of Montreal rounding out third.

In the second race of the weekend Sunday morning, Darren Keane of Boca Raton, Florida, started on the pole after finishing 10th during the first race Friday. Though Keane finished 10th in standings, he captured the fastest lap of the race, which bolted him to the first row. Czaczyk completed the first grid row with Kirkwood and Cameron Das of Brooklandville, Maryland, capping off the second row.

Double-yellow flags were out before the first lap of race two was completed. Baltazar Lequizamon of Buenos Aries made contact with the wall and lost a wing. Lequizamon was towed from the track and did not return to the race.

After the safety car intervention, 17 minutes remained in the session before the grid went green. Czaczyk made his move on Keane to overtake first place at turn two and led the rest of the race after capitalizing on the single-file rolling restart. Czaczyk took first, Kirkwood was second and Keane fell to third.