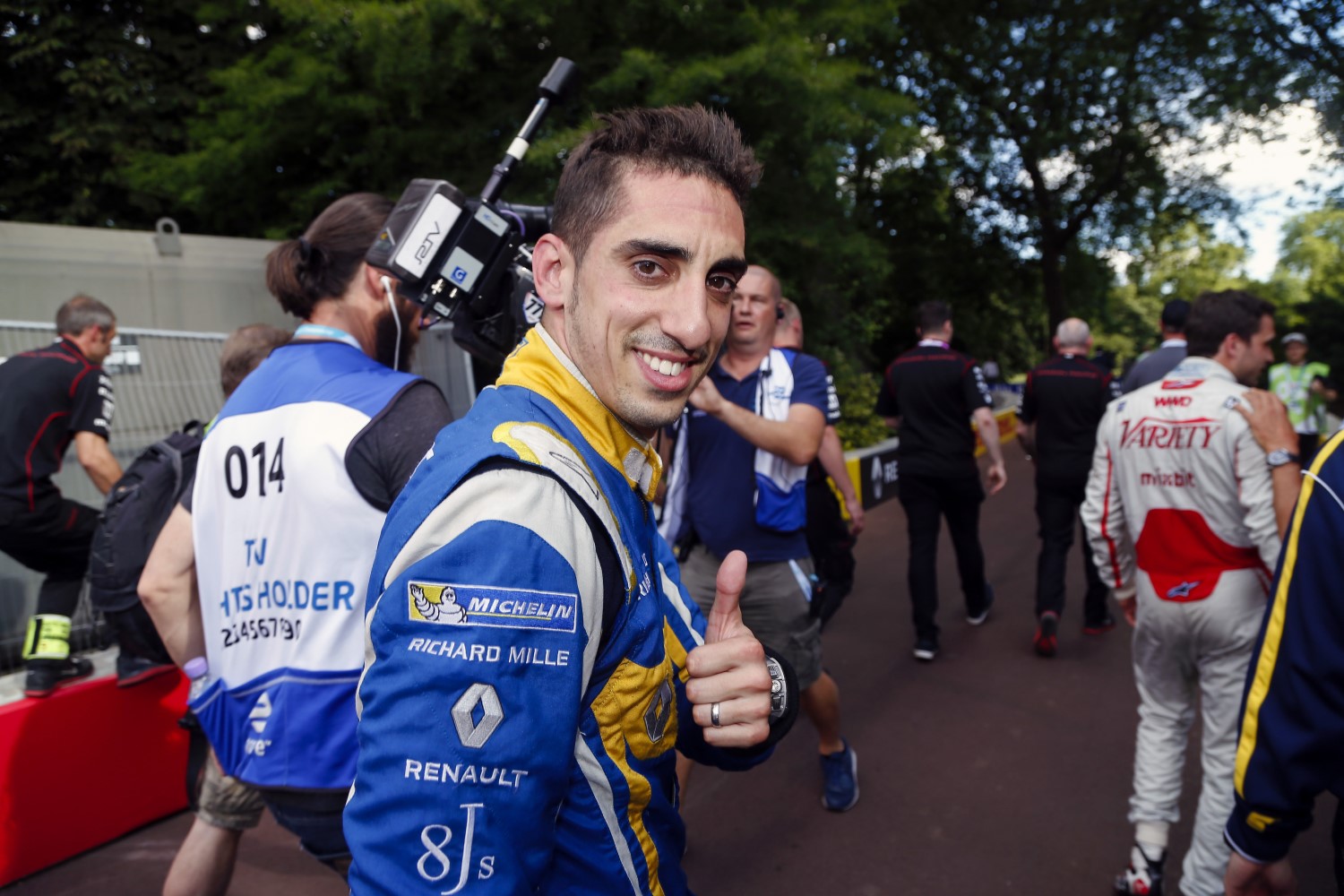 The final race of the 2015/16 season was a controversial affair, brought about by title rivals Buemi and Lucas di Grassi colliding on the opening lap of the race. Buemi made a slow start from pole, and was rear-ended by di Grassi under braking for Turn 3.

The incident took the rear wing off Buemi’s Renault e.dams entry, while there was significant front end damage to the Abt Schaeffler car of di Grassi. Both drivers limped back to the pits so that they could switch to their second car.

With two points on offer for the Visa Fastest Lap and both drivers tied on points, the championship now boiled down to a fight over who could be quickest over a flying lap. Both drivers – and Stephane Sarrazin – were awarded FanBoost, but the rules state that this power boost cannot be used to claim the bonus points.

Waiting for a clear piece of track to emerge, the protagonists bided their time in the pits, waiting for the perfect time to get a clear lap. Di Grassi struck first, but Buemi’s response was emphatic. Di Grassi gave everything in his response, but fell short, leaving the Swiss racer to succeed Nelson Piquet Jr as Formula E champion.

“The most important thing is that we won both championships," said Buemi. “I’m actually sad you know, to win it in that way, but also to see what Lucas did because I was very respectful of his driving, he’s been amazing. Like he’s said many times, his car is very bad and he is a very good driver, and if he was in my car he’d be at least half a second quicker!

“He’s a great driver, he did 24 hours in Le Mans, he never touched a car. He went between Nico and the wall, and I could tell you there was maybe five centimeters and once he braked, I just saw on the camera, he has two options – either go to the right or nail the back of my car and he nailed it perfectly. But a little bit too strong because we both went out.

“I’m a bit sad to see this because I think that was his only opportunity. In the end we had the quickest car, we were the best team. If we could’ve come out of this corner in front of him, we would’ve been far quicker."

Alain Prost, Senior Team Manager at Renault e.dams, said: “It was fantastic, we have improved the car a little bit and made it a little bit better for Nico’s style in the last few races. Sebastien was stunning today, we wanted to be on Super Pole for the three points and we got it. We wanted to be champions, we could not expect much more because in these types of races, especially on a track like this, like here in London – it’s tricky, with the weather. You can have a really different situation. It was the target and goal to be champion at the beginning of the year and we did it. It’s not very often that you have a target and you achieve your objective."

With all the focus on the championship permutations, it was easy to ignore the stunning drive that Nico Prost put in to claim back-to-back wins around Battersea Park. His win ensured that Renault e.dams retained the teams’ championship and secured him third overall in the drivers’ points.

“I think di Grassi wanted to visit London so he went straight, but Seb was in the way! It didn’t end well," he observed. “The safety cars were the main challenge, but the first car especially was flying so I could pull away quite easily every time. Then it’s just a case of remaining focused and not making a mistake. The team gave me a fantastic car this weekend, they don’t get much better than this to be honest."

There were three Qualcomm Safety Car periods during a stop-start race, and the drama continued after the flag fell with third-placed man Jean-Eric Vergne (DS Virgin), Nick Heidfeld (Mahindra) and Antonio Felix da Costa (Team Aguri) all being hit with time penalties for exceeding the permitted energy limit.

This promoted Jerome D’Ambrosio of Dragon Racing to third place, his team-mate Loic Duval into fourth and Stephane Sarrazin into fifth for Venturi. Bruno Senna claimed sixth for Mahindra ahead of team-mate Nick Heidfeld. Vergne’s additional penalty for an unsafe release dropped him to eighth and the two NEXTEV TCR drivers picked up the final points positions.

The weekend was a great success with 42,000 fans piling into Battersea Park over the two races and enjoying a host of eSports action and live music acts, both presented by Visa.

Now the teams turn their attentions to developing their season three packages to ensure they’re ready when the all-electric racing series sparks back into life on October 9 with the HKT Hong Kong ePrix.

Following an appeal from Dragon Racing regarding the Stewards decision relating to two penalties applied to Jean-Eric Vergne, the result of the race remains subject to the findings of the International Court of Appeal.