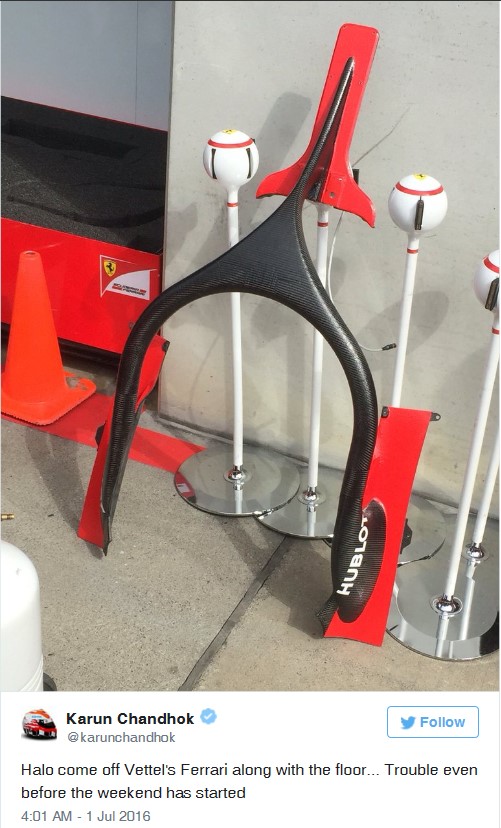 With Ferrari's Halo cockpit getting the nod from the FIA as the preferred safety system for the 2017 F1 season, the team has to get to work honing the final version for homologation. That's why it's brought its peculiarly named Halo Two design to the Austrian Grand Prix this weekend, where it's undergoing testing.

Motorsport.com reports that the team conducted an extraction test in the pits Thursday with medical staff and representatives from the FIA present. It reportedly took the medical staff 10 minutes to extract a Ferrari mechanic from the car.

Sebastien Vettel was supposed to run laps Friday with the new Halo installed, but unfortunately, that test was postponed as his car encountered mechanical problems on the track. It's unclear if Ferrari intends to test the new Halo design at some other point during the weekend.

The first iteration of Ferrari's Halo was made out of steel, but this version is made from lighter and stronger titanium, according to a BBC Sports report. This new design also has slight changes to the shape and size, though as BBC notes, these changes are hard to spot, and far from finalized.

Ferrari was in a bit of a competition with Red Bull, which proposed a windshield-like Aeroscreen design as a safety cockpit, but that design was shelved last month. That means Ferrari has a lot of work ahead of it to get the Halo ready for next year, especially considering that 2017 F1 cars will be very different than this year's. R&T