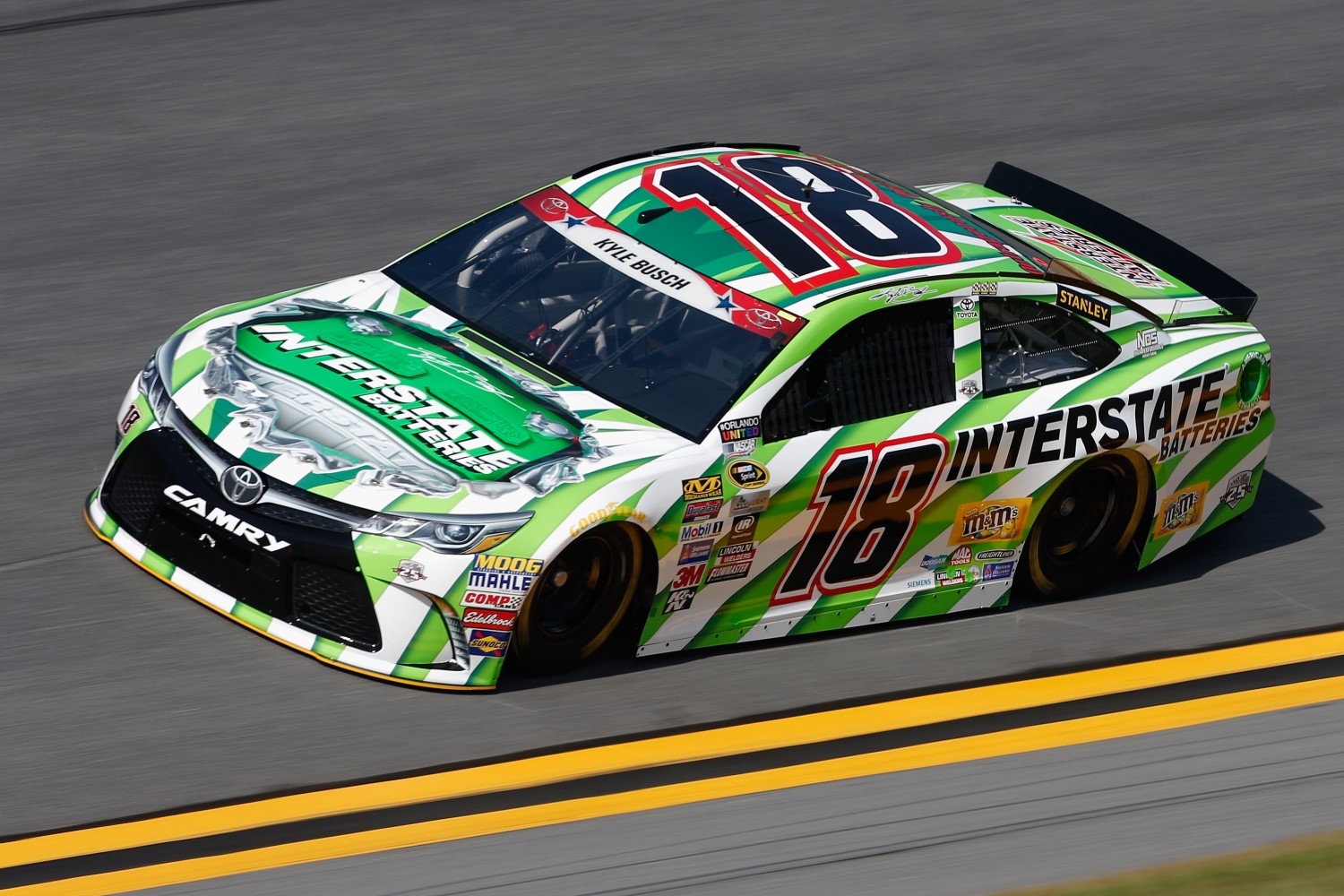 Suddenly and without warning, Kyle Busch's #18 Toyota veered hard to the right and nosed into the outside SAFER barrier at Daytona International Speedway. The wreck occurred 35 minutes, 47 seconds into Friday morning's NASCAR Sprint Cup Series practice, a session rescheduled from the day before because of afternoon rains on Thursday. Busch was second in a four-car line, drafting with teammates #11-Denny Hamlin (who led the pack), #20-Matt Kenseth (running third) and #!9-Carl Edwards.

As the quartet rolled through Turns 1 and 2 at the 2.5-mile track, the right rear tire on Busch's Camry exploded, sending the car out of control and into the wall. Busch walked away from the wreck. "It wasn't any fun, that's for sure," Busch said after a mandatory trip to the infield care center.

"Your first instinct is to correct, and the car automatically corrects, and then finally when it catches… or hit the apron and caught, it turned back the other way and headed on into the fence. That was certainly a big hit, so you've got to thank NASCAR for their safety advancements in the cars and the driver's equipment and things like that-and of course the SAFER barrier as well. That could have been a heck of a lot worse than what that was."

A Goodyear spokesperson noted that Busch's tire had sustained a gash roughly the size of a fist. And Busch, who had to go to a backup car, wasn't the only Joe Gibbs Racing driver to experience issues with a cut tire on Friday. Teammate Edwards was far more fortunate. The driver of the #19 Toyota brought his car to the garage before his tire suffered a catastrophic failure. "I felt something vibrating…

I thought it was the drive line or the engine," Edwards said. "We had a puncture in the tread of the left rear tire. It was leaking in the garage. It was five or 10 pounds low when we came in." After returning to the track with his teammates, Edwards had a close-up look at Busch's accident. "It was Matt in front of me and Kyle in front of him,"

Edwards said. "I saw something come out from under Matt's car and I thought, 'I wonder what that is?' Then I saw Kyle sideways. He drilled the fence. Honestly, he hit hard enough (that) I was really worried about him. But it seems like he's OK. Adam (crew chief Stevens) said he was good…It's just kind of odd to have two out there like that. We were in the same group and had them happen one right after the other.

There's just some debris out there causing punctures. I got lucky because I don't think I would have stopped if we were racing out there, if I had felt that vibration. It was very slight. I'm fortunate that mine didn't blow like that. It looked like a pretty violent hit." Because the accident occurred with fewer than 10 minutes left in practice, Busch had no opportunity to get laps in the car before Friday's scheduled 4:10pm/et qualifying session. NASCAR Wire Service