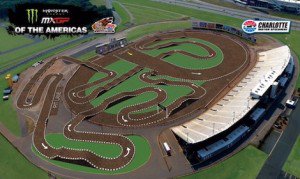 The biggest stars of international motocross will light up the night sky Sept. 2-3 at The Dirt Track at Charlotte in the Monster Energy MXGP of the Americas, the East Coast’s only MXGP event, on a hulking, one-mile circuit that will provide fans with unmatched views of one of the fastest courses on the MXGP calendar.

The course layout was designed by noted MXGP track designer Justin Barclay, who will be on site throughout construction of the first-of-its-kind, high-speed SuperCourse.

“The MXGP track builders have come up with an amazing design," said Marcus Smith, Charlotte Motor Speedway president and general manager. “The brand-new SuperCourse at The Dirt Track at Charlotte will deliver an unprecedented motocross showcase during a two-night spectacle of speed on Sept. 2-3."

The FIM MXGP world championship, the world’s most successful international motocross series, will see points leader Tim Gajser and defending champion Romain Febvre take on top American riders including Eli Tomac and Justin Barcia in two 30-minute-plus-two-laps motos around a demanding SuperCourse circling one of the most expansive dirt tracks in the world.

Riders representing 16 countries will launch out of the gate and make a breathtaking charge directly toward the grandstand crowd as they approach a treacherous left-handed Turn 1. From there, riders will face a mix of long, sweeping corners, high-speed straights and tight 180-degree turns that will provide plenty of passing opportunities.

“We are thrilled with the Monster Energy MXGP SuperCourse," MXGP President Giuseppe Luongo said. “Never before have fans been able to experience a true one-mile, outdoor-style track within an infrastructure such as The Dirt Track at Charlotte. Charlotte Motor Speedway is to be commended for its ingenuity with this design. It will absolutely be an unequaled experience for grand prix fans from around the globe.