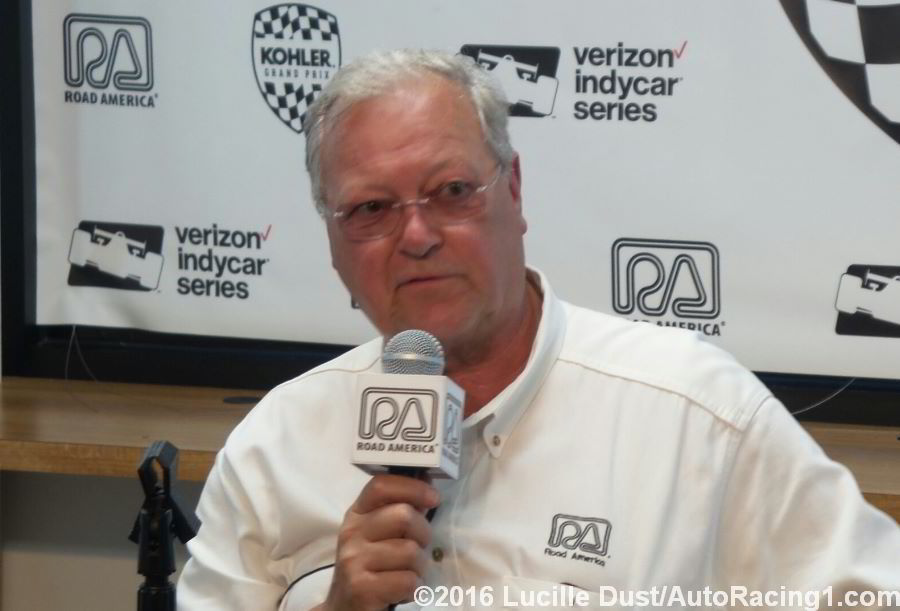 THE MODERATOR: We're pleased to welcome Road America President and General Manager George Bruggenthies to the media center. George, it's been a tremendous weekend for IndyCar's return to your track. Give us your thoughts on how the weekend has transpired.

GEORGE BRUGGENTHIES: Well, I think it's really happened wonderfully considering the weather this morning. The crowds really came out. I have to congratulate the Road America staff and the whole team that does all the operations here. They worked very hard preparing. I think we delivered. The crowd came out and they had a great time. Beautiful race. I think they'll be back.

THE MODERATOR: I think you were going to make an announcement regarding next year.

GEORGE BRUGGENTHIES: Absolutely. We'd love to invite the series back and we've got a contract for June 25 of 2017, so that's really exciting to announce that right now.

THE MODERATOR: Were you even a little surprised with the overwhelming reception from the fans? Was it more than you expected?

GEORGE BRUGGENTHIES: It was. You know, I know they probably exaggerated numbers in the early days, but I talked to a couple of my board of directors, and this is likely the largest event ever hosted by Road America, so that's really something.

Q. George, you see the cars roll around here, nine years to get back here. Just as a race fan how exciting was it for you to see these race cars, the IndyCars out here again?
GEORGE BRUGGENTHIES: It was very exciting. The fans obviously wanted it, and Mark Miles, as I stated before, has been working the last several years. Really the stumbling block was the date, and we put that together last July, the June date, and here it is. It just happened, and it was a great event.

Q. You said this is probably the largest event ever here. Can you ballpark what the attendance was?
GEORGE BRUGGENTHIES: I really can't because there's so many variables. Again, there were — Kohler associates were invited, and it'll take me a couple of days to figure out a number.

Q. If you could quickly talk about the great local support you have from people like Kohler, Gehl, Menards, a lot of local sponsorship.
GEORGE BRUGGENTHIES: A lot of local sponsors, people we've known a long time. Kohler has been a partner at various events, June sprints, July vintage. At the Motorplex they do a lot of activities. The engineers use the facility all the time, have meetings, and the associates are used to coming here. It was great to deliver a partnership that we get everyone back here. It's really fun.

Q. Before IndyCar had the official test last week and then also last year, was there a track inspection, and if so, was there any requirements made concerning safety?
GEORGE BRUGGENTHIES: Sure. Absolutely with the speed of the cars and just improved safety every year in the sport of motorsports. We added fencing. We added cable, debris cable in the fencing to just control a potential situation. That's really mostly what we did to comply and meet the new standards.

Q. The number was thrown out when NASCAR first came here was 50,000. Was that a reasonable estimate, then we can base this off of that?
GEORGE BRUGGENTHIES: I think it looked like 50,000 today, but I don't know. Again, I don't know. There was 200 teams here this weekend. How many people come with those teams? That's a number that I don't get transmitted to me. Plus the hard cards they print and that, that's something I really have to estimate, and I'll do that in the next couple of days, but it was a monster event, and I think we did a good job with it.

Q. How much do you start thinking about maintaining the series here? You hear the drivers up and down pit road saying this is a place we need to be at.
GEORGE BRUGGENTHIES: Well, we have a three-year agreement, so you can count on that, and if everything continues positively, we'll extend that. We'd like to. The fans love the series. They put on a great race. I think that was demonstrated. So it's something we would like to keep here, certainly.

Q. Is there any cooperation with the tourism board of Wisconsin or Elkhart Lake or Milwaukee concerning marketing of this race?
GEORGE BRUGGENTHIES: No, no, just our partners. Kohler stepped up, and that certainly helped control some of the risk. Again, I'm just a businessman, but the business looked pretty good today.

Q. Will Kohler be back as the sponsor?
GEORGE BRUGGENTHIES: They have that option, yes. All indications are they will continue.

Q. Does the success of this event maybe change any of your track plans or any construction you may have planned?
GEORGE BRUGGENTHIES: Yeah, I think I'd like to expand the broadcast booth and the announcer booth. I'm going to take a look at that. The engineer already has the plans for this building. We want to remodel this building somewhat. But we do something every year. We put $4-and-a-half million into the facility between October and May of this year. As you can see, the new victory lane is outstanding. The retail store center, fan engagement center, the new entrance, just all things — we'll always constantly try to improve the experience for the fans. This year we allowed 16 and under free with a paying adult. We're trying to engage that other demographic to come and have fun at The National Park of Speed.