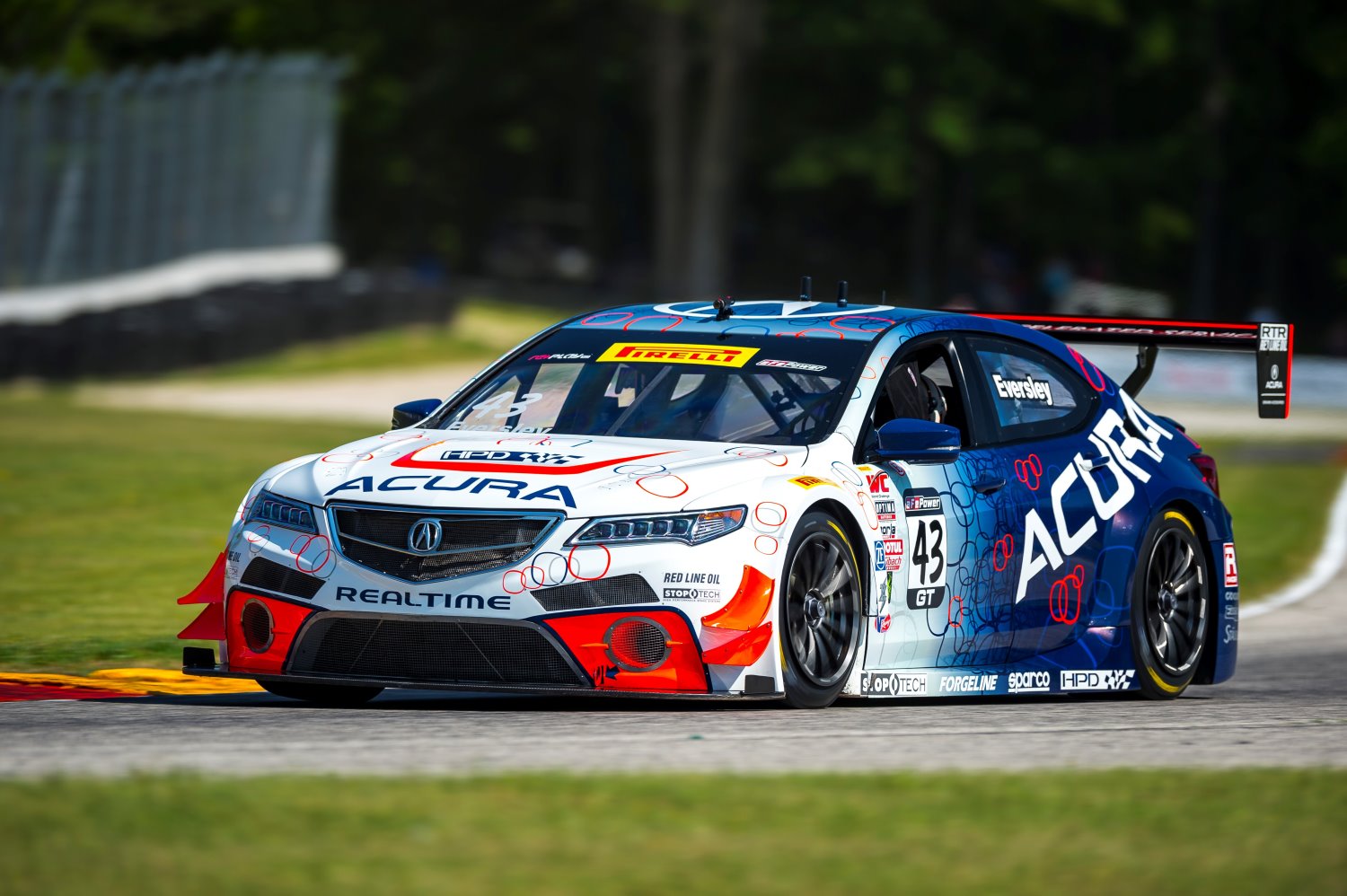 With Race Control issuing a wave off on the first attempted rolling start, Eversley, in the No. 43 RealTime Racing Acura/HPD/Red Line Oil/RealTime Acura TLX-GT, got a run when the green flag flew from the outside of the front row and passed pole-sitter Adderly Fong, in the No. 88 Bentley Team Absolute Bentley Continental GT3, for the race lead heading for turn 1.

On the run toward turn five, Peter Cunningham, in the No. 42 RealTime Racing Acura/HPD/RealTime Acura TLX-GT who had started third, also passed Fong for second, with Fong trying to re-pass Cunningham through turn 5 but going too deep into the corner and losing multiple positions.

That left the Acura teammates Eversley and Cunningham one-two, with Patrick Long, in the No. 58 Wright Motorsports Porsche 911 GT3 R, in third and Johnny O'Connell, in the No. 3 Cadillac Racing ATS-V.R., in fourth at the conclusion of the frantic opening green flag lap while Fong ran in fifth.

In GTA, Frankie Montecalvo, in the No. 66 DIME Racing Dime R&D Mercedes AMG SLS GT3, launched cleanly into the lead from pole in class, with Schein, in the No. 16 Wright Motorsports Porsche GT3-R, in second and Championship points leader Martin Fuentes, driving the No. 07 Scuderia Corsa Hublot Underarmour Ferrari 458 Italia, in third.

On lap three in GT, JD Davison, in the No. 33 AE Replay XD Nissan GT Academy Nissan GTR GT3, was on the move, passing Alvaro Parente, in the No. 9 K-PAX Racing McLaren 650S, for sixth position, leaving Parente to battle Michael Cooper, in the No. 8 Cadillac Racing Cadillac ATS-V.R., for seventh place.

A lap later in GTA, Fuentes dropped off the pace, falling to the back of the field and coming into the pits. Up front, Montecalvo led Schein by over 1.5 seconds with Andy Wilzoch, in the No. 45 Flying Lizard Motorsports Porsche GT3R, who had moved up into third place.

After rejoining the race, Fuentes would head back to the pits a lap later, with right rear damage forcing him to retire before the 50 percent completion point of the race, and as per the series rule book will score no points, impacting his Championship lead, while title-rival Montecalvo remained in the GTA lead overall, 10th in the overall order at that point in the race over Schein and Wilzoch.

At the 15-minute mark on the race, working lap seven, Eversley had pulled a 2.9 second gap over Cunningham, with another 1.7 seconds back to Long in third, while O'Connell was under attack from Fong for fourth, with Fong passing O'Connell for fourth and Davison following through and around O'Connell for fifth.

On lap nine, Eversley's lead was up to 3.5 seconds, while Parente passed O'Connell for sixth, with a reported mechanical issue on O'Connell's No. 3 hampering his pace. In front of them, Fong had pulled Long in from two seconds back and pressured the Porsche driver for third place.

O'Connell continued to drop back, nursing his car as both Cooper and Kyle Marcelli, in the No. 2, CRP Racing Audi R8, moved past the red Cadillac.

On lap 11 at the half-way point of the race, Fong executed a pass on Long to take third in GT, and found himself 4.7 seconds behind Cunningham in second place, and 8.7 seconds out of the lead. Fong's pass on Long won him the Cadillac ATS-V Best Move of the Race.

At the same time, Montecalvo had fallen back to 12th overall, while Schein continued in 17th overall, with that two running one-two in GTA while in GT Cup, Udell stayed out front and added to his growing lead.

By lap 17, Eversley's lead was holding steady, while the action was focused on a multi-car battle for fifth featuring Davison, Parente, Cooper and Marcelli.

In GTA, Schein had closed the gap to Montecalvo for the class lead, which had come down from nine seconds to just 2.3 by lap 19. In GT Cup, Udell's lead was up to 4.7 seconds over Urry with Fergus holding third.

At the checkered, Eversley would lead a one-two RealTime finish ahead of Cunningham, with the No. 43 driver scoring his fourth career Pirelli World Challenge victory. After starting on pole, Fong recovered after falling back to finish third ahead of Long and Davison.

In GTA, Schein charged on Montecalvo, passing him for the lead on lap 21 to take the victory, his fourth of the 2016 season, over the Mercedes driver, with Wilzoch finishing third holding off a late charge from Michael McCann, in the No. 82 McCann Racing Yeti GT3R/McCann Racing/Dodge Viper GT3, who finished fourth.

Udell would go on to take the checkered for the win in GT Cup, his sixth of the 2016 season, over Urry and Fergus.

With the fastest lap of the race, Eversley will start on pole on Sunday ahead of Bryan Heitkotter, in the No. 05 AE Replay XD Nissan GT Academy Always Evolving/Replay XD/Nissan Nismo GT3 GT-R, and Cunningham in third and Fong in fourth. In GTA, Montecalvo will start on pole for Sunday, and Udell will start on the GT Cup pole.

The Optima Batteries Best Start Award went to Colin Thompson, in the No. 13 K-PAX Racing Pfaff/McLaren Toronto McLaren 650S GT3, who improved three positions; while the Motortrendondemand.com Clean Pass of the Race went to Parente for his pass on Cooper. Urry was the VP Racing Fuels Hard Charger of the race winner for gaining six positions during the race.

"I got a good start and Adderley (Fong) and I went into turn one side-by-side," said Eversley. "I think the Acura TLX-GT V-6 had a little bit more in the straight and I grabbed the lead. He tried a big maneuver in Turn 5 and almost took us both out. But I was able to get away at that point. After PD (Cunningham) was in second, I knew I wouldn't have any trouble with anyone else like that. I was trying not to have Mr. Road America himself catch me. I have always enjoyed coming to this track and I won last year in Honda in another series. So to get the win in RealTime Racing's background is very special. I have been here almost all month doing a variety of things so it is like a second home to me. We did a two-day test here two weeks ago and really learned a lot about the Acura. I can't say enough about the HPD and Acura folks for their assistance with our team. We ran old tires and worked on the aero (dynamic) balance quite a bit. When I got clear in turn one, I felt I had a good chance of running up front. The Bentley (Fong) came back towards us at the end a bit but we watching our pace to finish with the win. It's obvious that the Acura is fast in a straight line and we have the cornering speed of some of the other cars. Getting a win here helps us with the points too."

"I think I had a good place to break for turn five but Adderley went a lot deeper and flew by me," said Cunningham. "So I tucked in behind Ryan and was following him. It's a great 1-2 finish for Acura and RealTime Racing right here at our home track. Just hope to repeat it again on Sunday."

"It was a fun race and I didn't make an ideal start," said Schein. "I was a little conservative and there was a lot of action in front me. I was just too cautious at the start and I didn't stick with the people I wanted to. Then I got behind early. Like we saw at Lime Rock, the Wright Motorsports crew do an excellent job in setting up the car. I saw Frankie (Montecalvo) had some problems and I was catching him. He went wide in the carousel and I was able to capitalize and move by him. I'm going to keep pushing until the end of the season to close the gap on the point lead."

"We led the race from green flag to checkered and that it is what you always want to do," said Udell. "The car was great and we had a little bit of tire wear. We were able to keep a little bit of a gap to Sloan (Urry). My GMG team is doing a great job and we are fine tuning the car each time out this year. I learned a lot about that when I attended the young drivers academy for Porsche this winter at Barber Motorsports Park. We were able to take the information from last year here and apply it to this weekend. The Porsche is a little faster than the Mustang I drove here a year ago in another series and I had to adapt to the speed and the car. But things are going well right now. Looking forward to Sunday's race."

Results are provisional until posted final. GT, GTA and GT Cup next take to Road America for their second and final race of the weekend, scheduled for 9:55 a.m. Central on Sunday. Watch the race live at motortrendondemand.com and follow live timing on world-challenge.com.