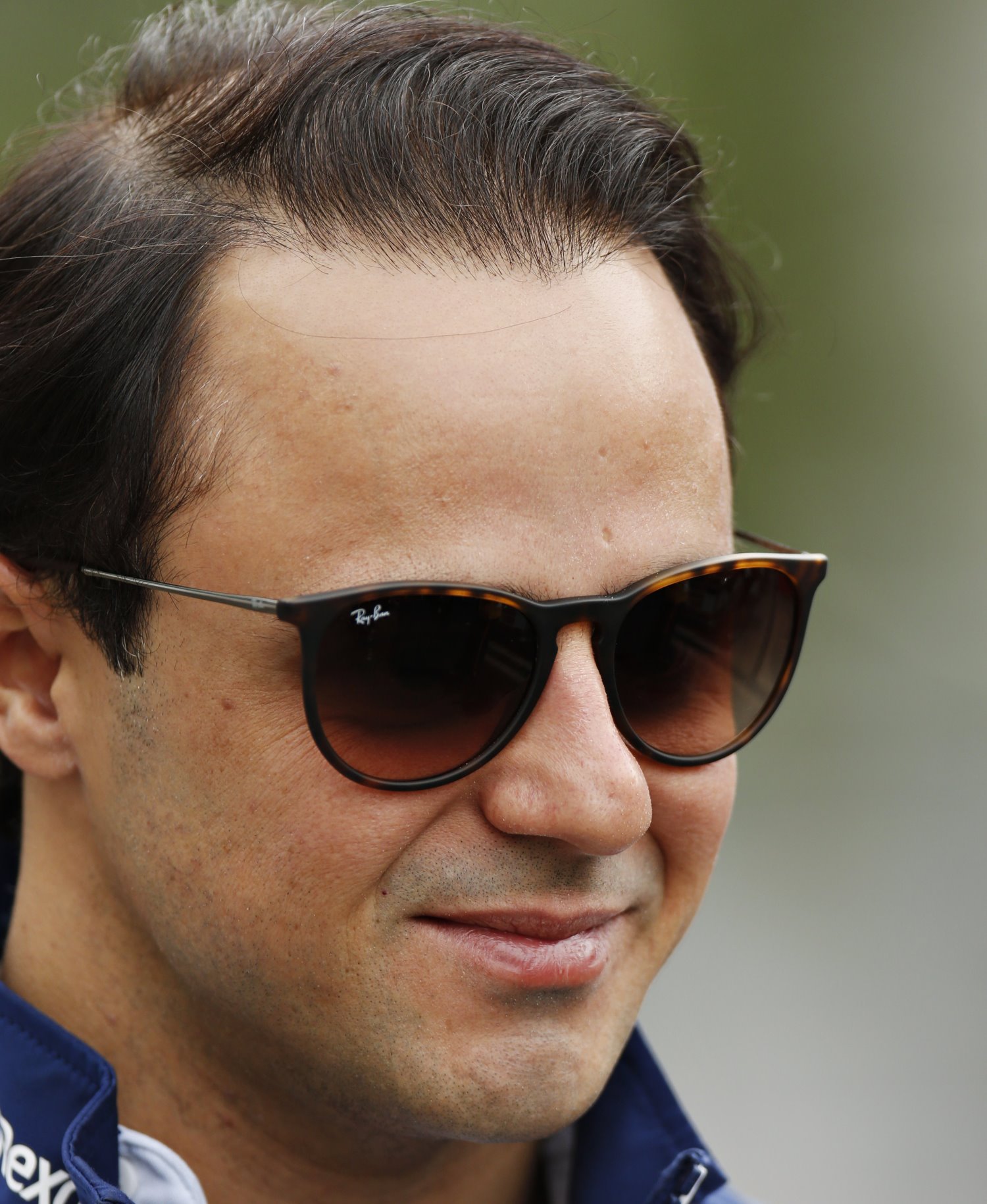 Brazil promoter slams Massa over GP comments
(GMM) The promoter of Brazil’s F1 race has slammed Felipe Massa for saying it is “possible” Interlagos will be axed from the calendar.

Following comments made by Bernie Ecclestone, Sao Paulista Massa admitted in Baku last weekend: “What is happening in Brazil at the moment is very difficult.

“So it’s not impossible that F1 in Brazil will be over.”

But as local Brazilian media were this week given a tour of the latest stage of renovations at the Interlagos track, promoter Tamas Rohonyi hit back hard at the Williams driver.

“I will call him and say that just as I don’t tell you how to drive, he does not understand how to organize a race,” Rohonyi told UOL Esporte.

“I do not comment on what I don’t understand. Massa just heard something and repeated it, but when I was hearing a lot about his driving, I did not comment,” he added.

However, F1 supremo Ecclestone said his race axe threats are serious, having warned in recent days that Canada, Italy and Germany are all also endangered.

The 2016 race calendar stands at an unprecedented 21 races, but the 85-year-old told The Times this week: “It is more likely to be 18 races next year.”

Marko says Kvyat could stay at Toro Rosso
(GMM) Dr Helmut Marko has suggested Daniil Kvyat stands a strong chance of keeping his place at Toro Rosso beyond the end of 2016.

After the 22-year-old Russian was dropped from the Red Bull Racing lineup earlier this year and relegated to the junior team, all the signs indicated the energy drink brand and Kvyat would part ways altogether for 2017.

That is because Toro Rosso is happy with Carlos Sainz but looks likely to promote the next young charger, Pierre Gasly, from GP2.

But the very latest rumors suggest that Sainz could in fact be headed to Renault for 2017, leaving Toro Rosso eager to ensure continuity by keeping Kvyat.

“You see how Kvyat is reacting? He is doing a great job there (at Toro Rosso),” Marko told Brazil’s Globo in an interview.

Marko’s comments are surprising, given the reports that his relationship with Kvyat appeared to have broken down, particularly after the Red Bull split.

“Kvyat had a moment of emotional weakness at the beginning of the year, I don’t know why, but now it’s much better,” Marko said.

“If he keeps this up, I see no reason why he should not continue in STR.”

Kvyat, however, has made noises about wanting to leave Red Bull altogether, but Marko insisted: “Yes, but he has a contract with us.

“It is not he who must decide whether he goes or not, but us.”

We reported last Friday that the Red Bull-championed cockpit protection windshield had stalled, after the FIA asked for further development of the concept.

“We have too many other projects at the moment,” team boss Christian Horner said.

That will be music to the ears of former Minardi and Footwork driver Fittipaldi, who told Brazil’s UOL Grande Premio that he hates the Aeroscreen concept.

“I am completely in favor of halo,” said the 45-year-old, “and completely against the second one, the Aeroscreen.

“It’s the most bizarre thing I’ve ever seen in my life — the most horrible thing,” Fittipaldi, nephew to the great Emerson Fittipaldi, said.

“It has nothing to do with the lines of an F1. But if halo enters F1 next year, after three races everyone will forget about it,” he added.

Red Bull may have championed Aeroscreen, but that does not mean safety should be the number 1 priority of F1, according to the brand’s Dr Helmut Marko.

Responding to complaints about the dangerous Baku circuit, the Austrian said: “I see it as something very positive for F1.

“It’s something we should have more of in motor sport,” he told Brazil’s Globo. “It is essential to have some risk. The chassis are now carbon fiber and very strong.

“If there was a higher risk, people would care more again and F1 would be more spectacular,” Marko added.

The Frenchman, who drove for Super Aguri ten years ago, says that just as reigning title winner Lewis Hamilton is slipping, German Rosberg has stepped up his own game.

“I think Nico has changed between last season and this year,” he told Le Point.

“He seems less sensitive to pressure now. He could have been destabilized after two straight defeats in Monaco and Canada, but before Baku he did important work in the simulator — Rosberg has matured this season,” said Montagny.

In contrast, Hamilton said as he arrived in Baku last week that he rarely tries new tracks in the Mercedes simulator because “I could spend a few hundred quid on a Playstation and learn the same amount.”

Montagny criticized that, saying Hamilton took “too easy” an attitude leading into what turned out to be an extremely challenging Baku layout on which he crashed in qualifying and then struggled to fix an incorrect engine mode setting during the race.

“He (Hamilton) was convinced he would easily beat Rosberg,” he said. “Hamilton seems less applied and involved than he was in the past.

“In Baku, he seemed to arrive having decided not to use the simulator and relying on his talent alone. But you see that he made mistakes and is now under pressure.

“Hamilton has a lot of his attention away from the circuits and seems bored by F1, which can damage him,” Montagny added.

“Hamilton is probably faster than Rosberg, but he doesn’t work as hard.”

Palmer used a recent example with Lewis Hamilton in Baku to get his point across, claiming the Briton didn’t need to push so hard on his Q1 lap which saw him make an error and run wide at Turn 15, bringing out yellow flags and spoiling other driver’s laps, because Mercedes have the pace to get through to Q2 with ease.

“It’s just frustrating, because he’s clearly got the pace to get through Q1 and yet he’s still causing yellow flags for us when we’re trying to do our best in the only session we get,” Palmer told Autosport.

The Renault driver was slowest in that particular session but believes he had the pace to go half a second quicker – which would have promoted him two places – had he not needed to back off for the yellow flags.

“In Q1, some of the top teams relax and it’s like a practice session for them,” he added. “But for us it’s our entire session. So if they’re causing yellow flags on two of our four laps it’s quite painful for us.

Vettel sure Ferrari has ‘bright future’
Sebastian Vettel has reaffirmed his belief that Ferrari is heading in the right direction, commenting that the squad has a “bright future”, despite not winning a race so far in 2016.

Ferrari secured second in the Constructors’ Championship last year with Vettel triumphing on three occasions, leading President Sergio Marchionne to set the outfit the goal of challenging for the 2016 title.

However, Mercedes has established an 81-point lead in the Constructors’ Championship, having won seven of this season’s eight Grands Prix, with Vettel 45 points adrift of Nico Rosberg in the Drivers’ standings.

“We still have a long way to go; I think the moment I joined the team there was a lot of things changing so it still takes some time but we don’t allow ourselves to take that time,” Vettel said.

“We have very, very ambitious targets and obviously great competition, but ultimately we want to prove the point that we are the best, we want to win.

“So naturally after a great season last year, where we finished second in the Constructors’ Championship, we want to step up already this year.

“We’re still lacking a little bit of speed but it’s getting better – I think the car has great potential.

“The people are coming along so the whole project starts to roll, starts to move in the right direction, so I’m confident we will have a bright future.”

Force India aims to close on Williams
Force India Deputy Team Principal Bob Fernley reckons the outfit can now turn its attention to closing the gap to Williams for fourth in the Constructors’ Championship, though remains wary of Toro Rosso.

Force India secured its second podium in three races at the European Grand Prix courtesy of Sergio Pérez, bringing it to within 31 points of Williams in the standings.

“We’ve always said that’s the minimum aim,” he told the Force India podcast when asked if fifth place in the standings remained the team’s goal.

“To be able to overhaul Williams will require a mammoth effort, and our first objective is to get some daylight between ourselves and Toro Rosso, which we now have.

“But we should not underestimate Toro Rosso’s ability, they’ve got good drivers, good team and a great car so we need to keep an eye on that.

“But clearly it gives us a bit of breathing space and one that we should now turn our attention to closing the gap with Williams.”

Fernley added that a difficult opening four Grands Prix, in which Force India amassed only eight points, masked the potential of the VJM09.

“I think we were very confident we could deliver strong finishes in the first four races, certainly the car we had was capable of doing that but circumstances didn’t go our way for four races,” he said.

“In two of those we lost both cars in the first lap, it was just the wrong place at the wrong time.

“In Barcelona we put the expected upgrade on which helped but again we had a fire with Nico [Hulkenberg] so we were back to one car again delivering points.

“Since then we’ve been very strong, [in] Monaco, Canada and Baku, [with] both cars finishing in the points and [having] strong finishes.”