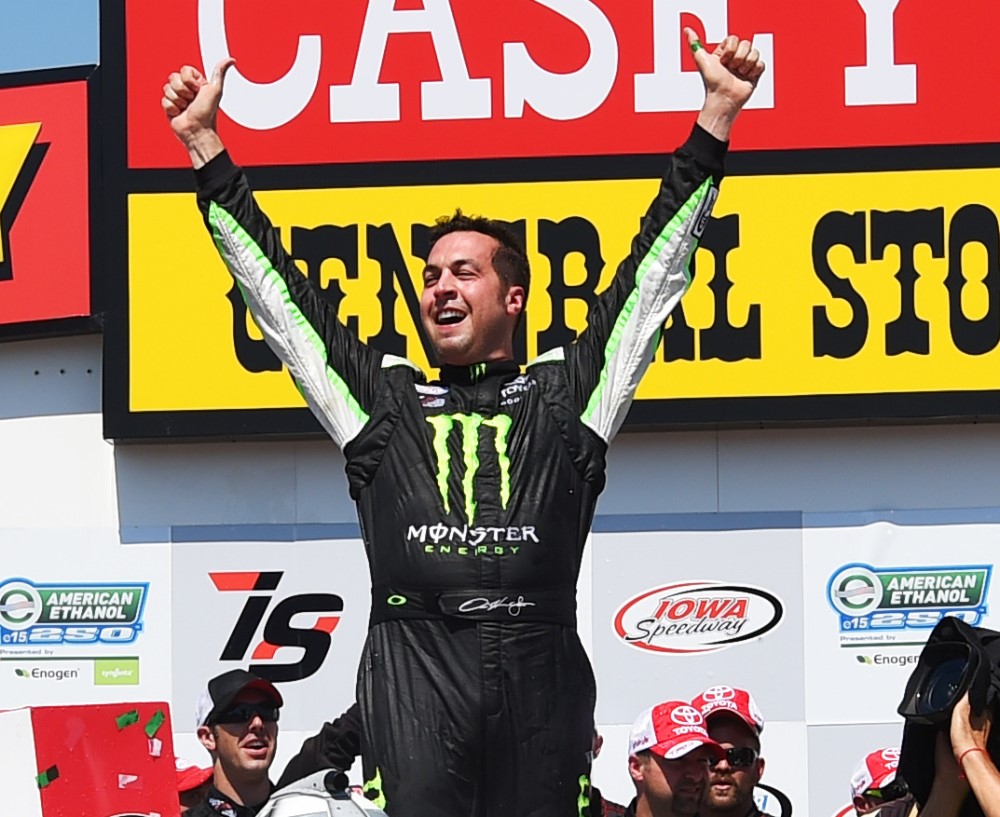 NEWTON, Iowa — Sam Hornish Jr., who hadn’t been in a car in 210 days, gave himself the perfect Father’s Day present on Sunday — a dominant victory in the sixth annual NASCAR XFINITY Series American Ethanol E15 250 presented by Enogen at Iowa Speedway.

Hornish, who last competed in a NASCAR Sprint Cup Series race last November at Homestead-Miami Speedway, received a call Monday from Joe Gibbs Racing to substitute for injured driver Matt Tifft. He made the most of the opportunity, picking up his fourth career XFINITY Series win and second at Iowa. Overall, it was JGR’s ninth triumph in 14 races this season.

"I don’t know, it doesn’t get much better than that," said an emotional Hornish in Victory Lane. "Just gotta thank Toyota, everyone from Joe Gibbs Racing for getting me out here and giving me this opportunity. Got my wife and kids here, it’s the first time the kids got to be here for one of dad’s wins.

"I can’t tell you what this means to me. I worked so hard to try to get a win when I had my kids here. Gotta thank God. He makes things happen. I was so nervous on Friday getting into the car thinking I’m going to make a mistake, and man, to go out there and win the way that we did. Just can’t say anything more about it."

Ty Dillon attempted to make a charge on Hornish on a Lap 224 restart, but settled for second, finishing ahead of Brad Keselowski.

"I don't know, I guess we just needed to be a little bit better," Dillon said. "The No. 18 (Hornish) was so dominant on the bottom (groove). I thought, obviously, we were the best car on the top (groove).

"Just needed a little bit more speed. I'm proud of my guys. We were kind of a mid-pack car and did what we needed to do to put ourselves in position — something we talked about all week — and we did a great job."

Hornish took the lead from last week’s XFINITY Series winner Daniel Suarez on Lap 24, setting the tone that the Joe Gibbs Racing cars were going to be hard to beat.

The two drivers swapped the lead on pit road on two occasions before several competitors elected to use varying pit strategies following the event’s third caution on Lap 126. Hornish restarted sixth, but only took 13 laps to get back to the race lead, passing Suarez on Lap 139 and never relinquishing.

Championship contender Erik Jones, who scored his fifth pole of 2016, had to drop to the rear before the race for an unapproved body modification. Jones, however, was never a factor as he battled fuel pressure issues, finishing 27th.