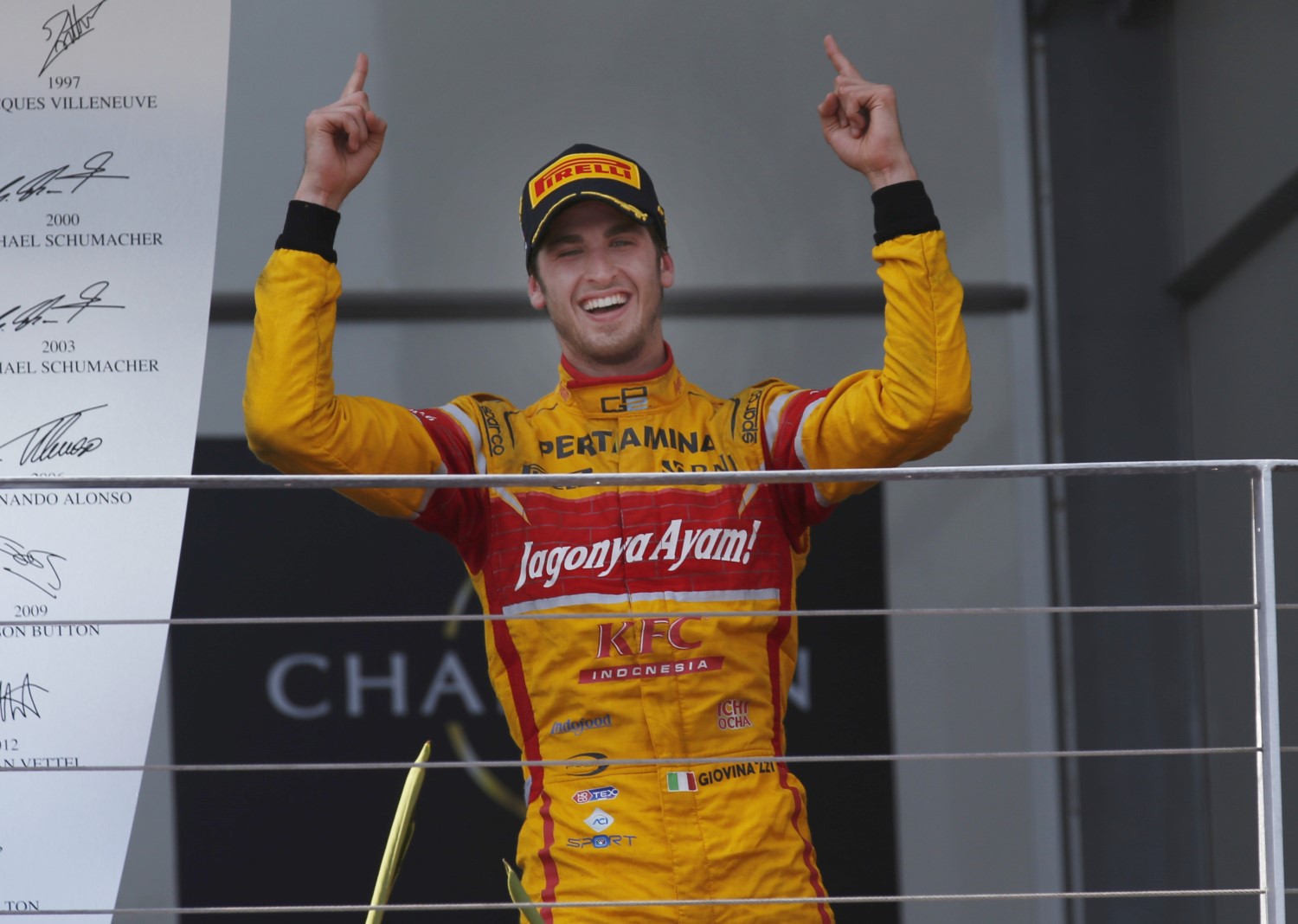 Antonio Giovinazzi has stunned his rivals with an incredible fightback drive in today’s sprint race in Baku to win despite dropping to P22 at the start, claiming the first double win weekend since Davide Valsecchi at Bahrain in 2012 to lead a PREMA Racing 1-2 from Pierre Gasly and Sergey Sirotkin.

At the start poleman Daniel de Jong led his rivals away as the lights went out, but with Sean Gelael making a poor getaway Nobuharu Matsushita swarmed up the inside to claim the lead from the Dutchman, who held off Mitch Evans and Oliver Rowland, but behind them yesterday’s winner almost stalled and fell to the back of the field.

Sirotkin was soon on the move, claiming P5 on lap 3 as Evans and Rowland squabbled over their positions: the Russian mugged the New Zealander three laps later before Jordan King launched himself up the inside of Jimmy Eriksson at turn 1: the pair came together as Sergio Canamasas jumped on the anchors to avoid them, but with the Swede left by the side of the road the first safety car period was upon us.

At the restart Matsushita went early and almost caught the safety car: he had to brake, bunching up the field with Rowland and de Jong running wide at the first turn, handing the lead back to the Japanese driver as Sirotkin slid up to P2, but further back Philo Paz Armand found the wall and the safety car was back out again.

This time Matsushita delayed his getaway but the field was bunched up again: Gustav Malja ran into the back of Evans at the restart line before moving to the inside and spinning Rowland round at Turn 1, with the Swede taking Gelael with him to the barriers and prompting another SC period as the Briton limped away and the New Zealander forced into the pits and retirement.

Matsushita went for a fast restart but Raffaele Marciello, now in second, went with him: the Italian ran too deep on the inside and collided with the Japanese driver, who was pushed into the escape road and retirement. Remarkably Gasly, who started in P18, was now leading the race after an astonishing recovery drive ahead of teammate Giovinazzi, who was now dreaming of a historic result and pushing with everything he had.

The Italian was all over the Frenchman in the closing laps, but without DRS he was going to have to do it the old fashioned way: on the final lap Giovinazzi ran outside on the front straight before cutting back inside at Turn 1, and when Gasly ran slightly wide the Italian was through. With pole, two wins and the fastest lap today Giovinazzi only missed yesterday’s FL for a perfect weekend, claiming PREMA’s first two wins and leading a 1-2 from Gasly, who was disappointed but proved a point with a tremendous recovery drive today. Sirotkin claimed another podium to remind everyone of his quality, ahead of Jordan King in P4. Artem Markelov survived a collision with Nabil Jeffri which saw him lose his right front wing end plate for fifth, with the Malaysian losing P6 to Canamasas on the penultimate lap but claiming Arthur Pic’s scalp last time round.

A dramatic weekend in Baku has certainly shaken up the title fights: Markelov now leads Norman Nato by 54 points to 49 in the drivers’ fight ahead of Giovinazzi on 46, Gasly on 45, Marciello on 43, Alex Lynn on 41 and Rowland on 34, while in the teams’ title RUSSIAN TIME lead PREMA Racing by 97 points to 91, ahead of Racing Engineering on 73, ART Grand Prix on 64 and DAMS on 61 as they all turn their attention to the next round in Spielberg, Austria just two weeks hence.