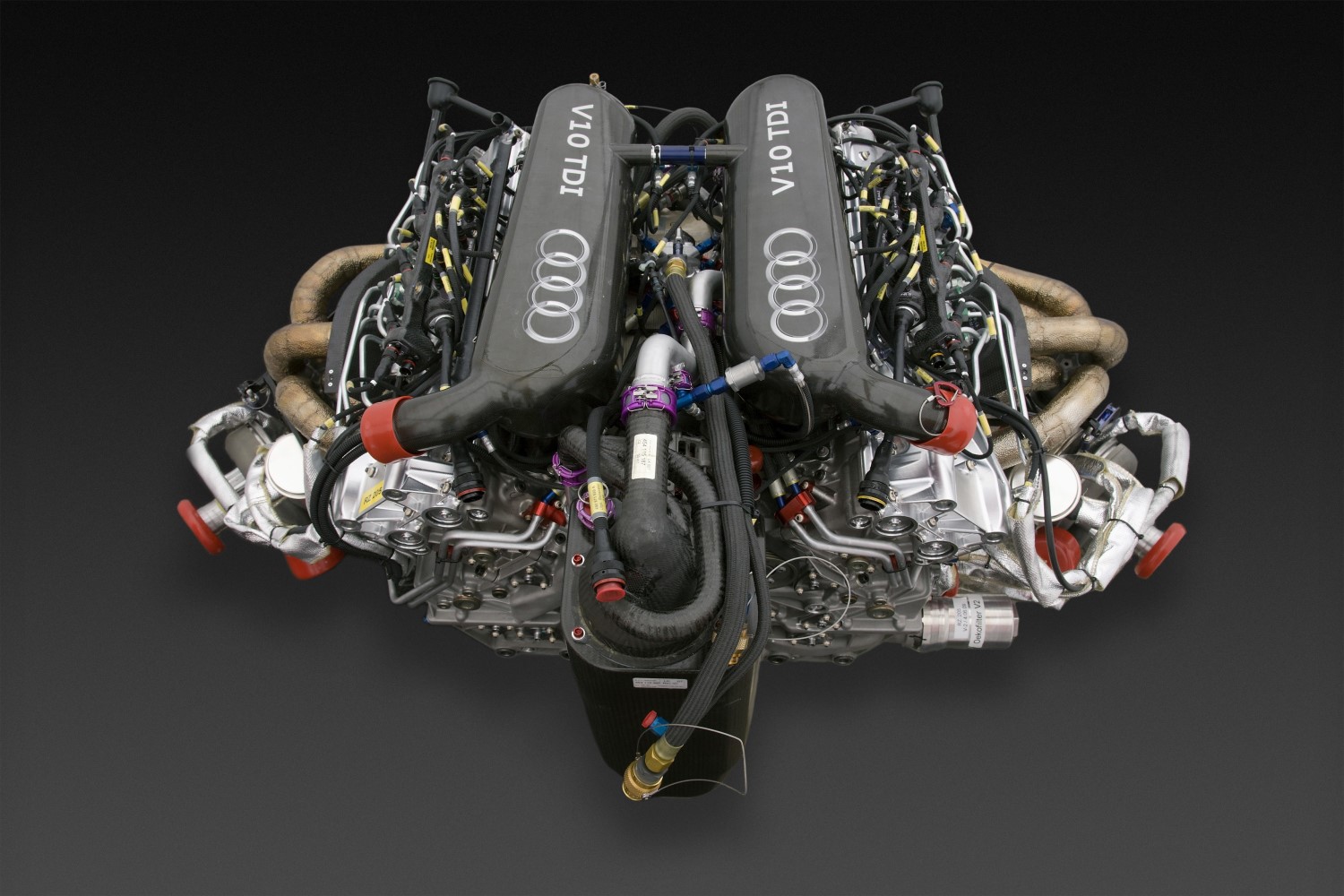 Audi has made history at Le Mans. In 2006, the premium brand became the first manufacturer to win what is arguably the world’s toughest endurance race with diesel power. 2016 marks the tenth anniversary of this achievement. Today, the TDI engine is more efficient than ever before and part of a highly complex diesel-hybrid powertrain. Never before has an Audi LMP1 race car been as powerful and fuel-efficient as the current Audi R18.

The revolution, literally, came quietly. The “higher-further-faster" of TDI power was heralded a decade ago with a sound that was unusual even to the ears of seasoned campaigners. The Audi R10 TDI raced around the circuit so silently that it was near-imperceptible. “At high speed, even the wind noise was louder than that of the engine," recalls Le Mans legend Tom Kristensen who, with nine victories, clearly leads the all-time winners’ list of the 24-hour race. Driving and shifting according to the sound level from 2006 on was history in the LMP1 race car.

Technologically, Audi Sport in preparation for the 2006 season, mastered its greatest challenge to date. A V12 TDI engine not only meant a new powertrain. “We had to come up with a new concept for the entire race car," says Head of Audi Motorsport Dr. Wolfgang Ullrich. “From the proportions of the race car and its weight distribution to airflow, the cooling air requirement and power transmission everything was new, as torque and output surpassed anything we’d previously known."

Audi Sport tested the diesel engine for Le Mans in collaboration with AUDI AG’s pre-production and production development. The 5.5-liter twelve-cylinder unit for use in racing was the first Audi diesel engine with an aluminum cylinder block. The Audi R10 TDI completed its initial rollout on the Italian race track at Misano on November 29, 2005. Exactly 200 days later, the diesel-powered sports car competed in the Le Mans 24 Hours and won. In between, 30,000 test kilometers, plus another 1,500 hours of testing the V12 TDI engine on dynamometers, were clocked up. Frank Biela/Emanuele Pirro/Marco Werner (D/I/D) crossed the finish line after 380 laps as the winners having covered 5,187 kilometers in the process. In the two subsequent years, the TDI engine from Ingolstadt and Neckarsulm again came out on top against fierce diesel competition on both occasions.

In 2010, Audi achieved the next major step with the R15 TDI. Its V10 TDI engine replaced the previous twelve-cylinder unit. It was 100 millimeters shorter, ten percent lighter and powered the open-cockpit sports car to a new top performance. Timo Bernhard/Romain Dumas/Mike Rockenfeller (D/F/D) covered 5,410.713 kilometers in 397 laps at Le Mans. With that, they broke a 39-year-old record from an era when no chicanes slowed the pace on the HunaudiÃ¨res straight. In a formation flight, the Audi R15 TDI clinched a one-two-three win. For the first time its 5.5-liter V10 TDI used two turbochargers with variable turbine geometry (VTG) which improved the engine’s responsiveness.

The Audi R18 TDI ushered in a new era in 2011. An innovative, compact and very efficient V6 TDI engine now powered the closed-cockpit sports car. To significantly reduce consumption and increase production relevance by downsizing, the engine’s displacement decreased by 1.8 to 3.7 liters. The cylinder banks with a 120-degree angle enclosed the exhaust side – in other words the exhaust manifolds were inside the V configuration as well. A single double-flow turbocharger was fed by the exhaust of both banks and its compressor was of a double-flow design as well and directed the fresh air through two intercoolers into the intake manifolds on the outside.

The efficiency gains expressed in compact figures: In the diesel era since 2006 the diameter of the air restrictor decreased by 34 percent, charge pressure was reduced by 4.7 percent and cubic capacity by nearly 33 percent. Absolute power output on the other hand dropped from more than 478 kW (650 hp) to about 360 kW (490 hp), in other words by only 24 percent. As a result, output per liter increased from 87 kW (118 hp) in 2006 to 107 kW (146 hp) in 2011, equating to a plus of nearly 24 percent. The higher injection pressures of the racing injectors lead to even more efficient combustion. Now operating at 3,000 bar the racing engine was a precursor of the rising pressures making their way into the automobile.

Marcel Fassler/Andre Lotterer/Benoit Treluyer (CH/D/F) won in 2011 with the R18 TDI and a year later with the R18e-tron quattro that used a hybrid powertrain for the first time. In 2013, LoÃ¯c Duval/Tom Kristensen/Allan McNish (F/DK/GB) were victorious at Le Mans with a further developed version of the R18 e-tron quattro. Following Fassler/Lotterer/Treluyer in 2012, they were the next title winners in the 2013 FIA World Endurance Championship (WEC). In 2014, efficiency regulations came into effect that marked a radical change in racing. Instead of limiting output by factors such as air restriction or cubic capacity the limitations applied purely to energy. Audi enlarged the V6 TDI engine that had to make do with about 22 percent less fuel than its predecessor to four liters of displacement. The trio of Fassler/Lotterer/Treluyer achieved the third victory – marking the eighth for a TDI engine from Audi at Le Mans.

For the 2016 season, the regulations have further reduced energy consumption. Audi has developed the V6 TDI engine to a new level once more. “We’re now using the engine concept for the sixth consecutive year. This shows how good the basic idea still is," says Ulrich Baretzky, Head of Engine Development at Audi Sport. “Due to efficiency increases, we’re compensating for the lower amount of fuel to some extent."

The current V6 TDI engine consumes 32.4 percent less fuel than the first generation from 2011. The progress made in comparison to 2006 is even more substantial. Today, Audi’s LMP1 race car with the current powertrain uses 46.4 percent less fuel at Le Mans than it did ten years earlier. In spite of this, it achieves lap times that are ten to 15 seconds better than those a decade ago. All this is possible thanks to the individual strides that have been made, particularly in the areas of aerodynamics, lightweight design and powertrain.