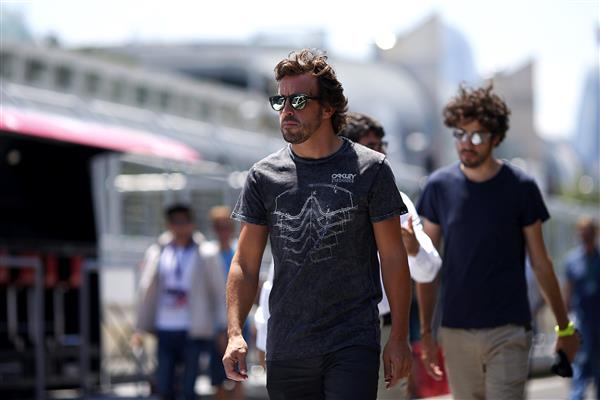 With only days to go before the 2016 FORMULA 1 GRAND PRIX OF EUROPE, Fernando Alonso, the race’s Official Ambassador, returned to Baku to meet some of his many fans in Azerbaijan and take a cultural tour of the city before the first F1 engines roar across the streets of the sport’s newest home.

He began his tour of Baku by walking along the START/FINISH straight of the latest street circuit to be added to the F1 calendar, before visiting the Azer Ilme Carpet Weaving Center to experience for himself one of the great national crafts of Azerbaijan. The Azer ilme factory is the home of the traditional art of carpet weaving in Azerbaijan, where it mixes modern technology with ancient techniques to create some of the finest and most sought after carpets in the world. During his visit, Alonso was presented with his very own carpet in recognition of his ambassadorial work for the first ever F1 race in Azerbaijan.

Next up, the two-time World Champion visited the Heydar Aliyev Center, a 619,000-square-foot building designed by world renowned architect Zaha Hadid and noted for its distinctive architecture and flowing, curved style. The Center was designed to become the primary building for the nation’s cultural programs and aspires to express the sensibilities of Azeri culture and the optimism of a nation that looks to the future. It is home to regular exhibitions and other cultural events and plays an essential role in modern Azeri intellectual life.

Following on from his trip to the Heydar Aliyev Center, Alonso met some of his many fans at Baku’s Dalga Plaza. From here – after being presented with his very own mountain bike by the Cycling Federation of Azerbaijan – he joined them in a short cycle to the Aquatics Center, taking in some of the city’s many sights along the way.

Speaking of his return to Baku ahead of the 2016 Formula 1 Grand Prix of Europe, Alonso was effusive in his praise of the city and the major progress that has been made by Baku City Circuit since his last visit in March of this year: “It’s fantastic to be back in Baku! The progress that has been made since my last visit is simply astounding – the track looks incredible. I was also able to see and learn more about what makes this wonderful country so special. The Azr Ilme and Heydar Aliyev Centers really opened my eyes to the great cultural history of Azerbaijan. Meeting some of my fans and joining them in a cycle through this beautiful city was just the icing on the cake of a wonderful day for me. I am so excited to get down to action now and test out this circuit over the weekend – it has it all: tight corners, winding streets and most of all Speed!"