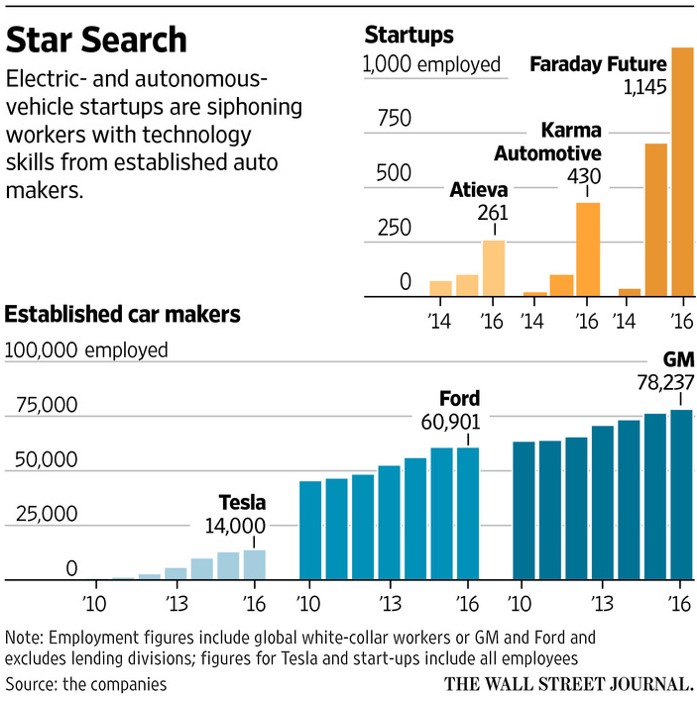 Bibhrajit Halder left the Midwest and a job developing autonomous trucks for Caterpillar Inc. about a year and a half ago to join Ford Motor Co. in the San Francisco Bay Area, where the auto maker is working on self-driving vehicles writes Christina Rogers of the Wall Street Journal.

"The work is exciting," Mr. Halder said in an interview about six months after joining Faraday, where he says he has more responsibility than at the blue chip companies he left. "The company is dependent on you to deliver."

Ford is at the center of a ferocious hiring battle now pitting traditional car makers against startups out to force a shift to electric and autonomous-driving vehicles. As they vie for skilled workers, the demand for people who know how to design or build a car has swelled, putting auto makers behind the eight ball.

"Across the auto-engineering spectrum right now, there is a bit of war for talent," said Ford product development chief Raj Nair. Ford said its voluntary workforce departures overall were less than 1.9% last year. But says Mr. Nair: "right now, where we’d like to be in hiring for our growth this year, we’re behind our curve."

Ford and other car makers are responding to the poaching by building deeper ties with universities, opening offices in Silicon Valley and buying startups. General Motors Co. recently paid more than $1 billion for autonomous-driving company Cruise Automation, and acquired Sidecar Technologies 20-person team that was working on ride-hailing services.

Toyota Motor Corp. in March hired the 16-person workforce at Jaybridge Robotics Inc., an autonomous vehicle startup spun out of the Massachusetts Institute of Technology, to help staff a new $1 billion artificial-intelligence center.

One way auto makers are building skilled software talent is by investing in Silicon Valley firms. Ford last month spent $182 million for a stake in San Francisco’s Pivotal Software Inc., a software-development and cloud-computing firm. The investment could sharpen software expertise without adding layers of employees.

Still, as they scout new talent, car companies are losing some of their top minds. In April, Uber Technologies Inc. hired Ford’s Sherif Marakby, who oversaw the car maker’s hybrid- and electric-car engineering, to head its global vehicle programs. He was one of several recent high-profile employees to unplug from a Detroit car maker or Tesla Motors Inc., the fastest-growing electric auto maker.

Startup Faraday Future has hired more than 1,100 employees in the last two years. A number came from auto makers such as Ford and Tesla, according to an analysis of LinkedIn profiles by The Wall Street Journal. By the end of 2016, Faraday Future hopes to fill another 550 openings, it said. Apple Inc., which is believed to be developing its own electric car, hired auto-industry veteran Doug Betts last year. Mr. Betts built a reputation as a manufacturing guru over a career spanning nearly two decades at top car makers.

Recruiters liken the hiring frenzy to the dot.com boom.

"It’s sort of like the 1990s all over again, but now it is car engineers," said Valerie Frederickson, chief executive of Silicon Valley-based human resources adviser Frederickson Pribula Li. Engineers with automotive know-how are seeing lucrative offers from companies they may have never heard of.

"The good ones, if they put themselves on the market, can get multiple offers," she said. Signing bonuses of between $5,000 and $20,000, retention bonuses and tuition repayment aren’t uncommon. Software engineers working in the technology sector on average earn nearly $25,000 more a year than those in automotive, not including equity, according to career website Glassdoor.com.

Tesla and several auto suppliers have lost hundreds of employees to Google and Apple. One Tesla executive said its employees are being offered two to three times their current salary to decamp for rivals.

"We have boots on the ground in Detroit…actively seeking talent there," said Zak Edson, director of marketing at Menlo Park, Calif.-based Atieva, which currently advertises 50 open positions.

Andrew Leutheuser, GM’s chief engineer for autonomous vehicles, is among the returnees. Starting at GM in the late 1990s, Mr. Leutheuser was lured away in 2010 to work on Tesla’s Model S sedan only to return to GM three years later as an engineering group manager. He declined to comment on compensation.

"Instead of working on one project, I’ve been able to work on a number of vehicles," Mr. Leutheuser said. "The opportunity to have a big impact quickly is profound." The cost of living in Silicon Valley was also a challenge, he added, noting he has three children.

"The notion that we’re hiring someone at GM, cradle to grave, a lifer, that’s dead," Mr. Huffaker said. The goal instead is to get them to stay longer, he said. Christina Rogers, Wall Street Journal