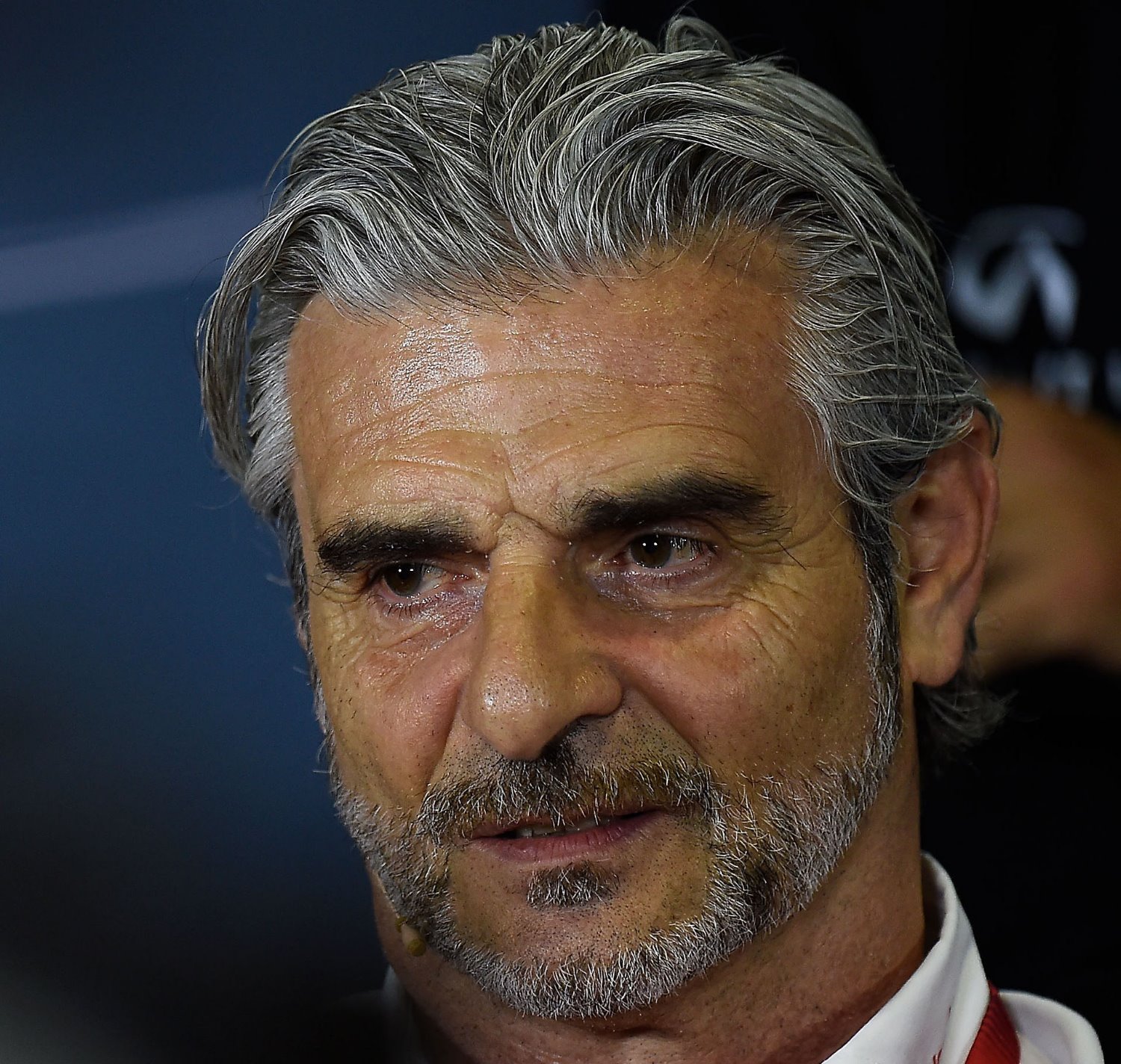 Arrivabene says gap to Mercedes 'shrinking'
(GMM) Ferrari can look on the bright side despite missing victory in Sunday's Canadian grand prix.

That is the unified message of Sebastian Vettel as well as the Maranello team's boss, even though Maurizio Arrivabene had initially been critical of a strategy mistake that arguably cost the German driver the Montreal win.

It has been a difficult last few races for Ferrari, with the highly-critical Italian media saying the team had even fallen behind Red Bull in the packing order.

"Sometimes it seems like the Italian press is our biggest opponent," Vettel said on Sunday. "So maybe you can write something nice now," he told a reporter for Italy's authoritative La Gazzetta dello Sport.

Vettel had refused to be critical of Sunday's strategy error that left Mercedes' Lewis Hamilton to cruise to victory, and boss Arrivabene agrees that Ferrari should be feeling upbeat.

"With humility, but also with confidence," he said when asked how Ferrari will now move on to this weekend's inaugural race in Azerbaijan.

"We have responded to the problems of Spain and Monaco and understand the car better now," added Arrivabene. "The gap to Mercedes shrinks, but it's still not enough."

Finally, amid swirling rumors about the identity of Vettel's teammate for 2017, Arrivabene was asked about another particularly poor weekend for Kimi Raikkonen.

"Kimi had problems this weekend," said the Italian, "which happens in racing. Sometimes the weekend goes perfectly, at other times not."

F1 changing rules at the wrong time – Wolff
(GMM) Toto Wolff has indicated he thinks F1 is changing the rules for 2017 at precisely the wrong moment.

After two easy title wins and almost unprecedented dominance for Mercedes in the 'power unit' era, the sport decided to turn a corner for 2017 with faster, wider cars and tires.

But Mercedes team boss Wolff says that radical change is now looming despite the fact that rivals including Ferrari and Red Bull are looking increasingly close to the leading pace.

"We are slowly getting back to a more normal situation in formula one," he said in Montreal.

"For two years we were in the fortunate position of being the dominant team," added Wolff, "but now we see that the gap between the top three teams shrinks.

"All these years we were saying that if you leave the rules alone and don't change them, the balance of power would equalize and the fight would be closer. And so it happened.

"From the racing excitement side everything is now ok, but next year we are changing the rules yet again," Wolff said.

Button says only he will decide F1 future
(GMM) Jenson Button insists he remains in the driving seat when it comes to deciding his future in formula one.

Rumors are swirling that, after seven years with the British team, McLaren intends to replace him for 2017 with reigning GP2 champion and reserve driver Stoffel Vandoorne.

36-year-old Button has, in turn, been linked with a move to Williams, where he began his F1 career some seventeen years ago as a teenager.

"Whatever I do it will be my decision," the Briton told Brazil's UOL in Montreal.

"I will choose my future. I have to make sure I still love the sport. Who knows what will happen but I will make the decision — not now but in a few months," Button added.

Interestingly, he suggested that part of that decision will be about whether it is McLaren or Williams that can provide him with the better car.

"I want to be competitive," said Button. "After you win races, you win a championship, you want to keep fighting at the top.

"If I feel that I can be in a competitive position next year, I will stay in formula one," he added.

Asked if Williams will be a good move for 2017 just as the rules are changing significantly, Button answered: "It's always very difficult to judge.

"The only team I have information about is McLaren, so I have no way of knowing how competitive the other teams will be.

"I'm not thinking about it right now, I'm just enjoying every weekend and trying to get the most out of the car. I don't need to worry about anything else apart from that — I just want to enjoy my racing."

The first sign of the French marque's interest was comments made a few days ago by F1 legend Alain Prost, who is an ambassador and advisor to the works Renault team.

"I would like to see how he (Sainz) develops in a top team," the quadruple world champion had told the French-language Minute-Auto.fr.

Amid the rumors those comments triggered, Fernando Alonso's manager Luis Garcia Abad agreed that 21-year-old Sainz is one of the rising stars of F1.

"I recently read an article on the performance of Sainz and Verstappen and it was very similar," Garcia Abad told the Spanish sports daily AS in Montreal.

"The difference between the two was a phone call (from Red Bull)," he added, referring to Dr Helmut Marko's decision to promote Verstappen to the senior team.

"He (Sainz) has maturity, talent and a desire to take his chance, and he is going to get that chance," Garcia Abad, whose charge Alonso is a close friend of Sainz's, said.

Crucially, as the rumor reached all the way to the Renault team boss Frederic Vasseur, the Frenchman did not take the opportunity to issue a denial.

"The first thing we would need to know is his contractual situation," he told another Spanish daily, Marca. "But he is a very interesting driver for the future."

At the weekend, F1 supremo Bernie Ecclestone cast doubt on the future of the popular race by suggesting Montreal had failed to fulfil its pledge to update the Circuit Gilles Villeneuve's ageing facilities.

"We'll see," the 85-year-old told reporters, when asked if Canada will therefore be left off the sport's 2017 calendar.

Mayor Coderre has now responded, saying he has met up with Ecclestone to seek "clarification".

"We are talking about an investment of several million in public funds and it was important to get it right," he told the Quebec newspaper La Presse.

"I met with Mr. Ecclestone several times recently and had a meeting yesterday with the president of the executive committee to settle the details," he added.

However, Coderre said he was not sure if Montreal could complete the required work in time for the 2017 or even 2018 Canadian grands prix.

"This is a complex process," he explained. "We have a date in mind, but I prefer not to talk for now. Mr. Ecclestone is aware and does not compromise in any way the contract that we have with him."

Coderre continued: "We know Mr. Ecclestone. He has his way of negotiating, but everyone wants to keep the grand prix in Montreal.

"That is why we want to ensure that the replacement of the installations is done right."

Coderre also did not want to comment on Ecclestone's hints of conflict with the current promoter, Francois Dumontier.

"It is up to them to sort it out," he insisted. "For me, Mr. Dumontier is an outstanding organizer, but the management and promotion of the grand prix is not up to me."

Reports have suggested that after the sudden death from meningitis of his wife in March, Allison is now considering an offer to return to Britain to be with his three children full-time.

Until the death of his wife, Allison – who joined Ferrari from Enstone based Lotus in 2013 – was splitting his time between his family in the UK and his factory-based role in Italy.

"The only comment I make is that this is completely untrue," Ferrari boss Arrivabene said in Montreal when asked about speculation linking Allison with a return to Renault.

"James recently suffered a very difficult loss, which I would not want to see anyone go through. We all support him, which is the most important.

"A couple of days ago I read what was written about him and, in my opinion, to me it is a matter of disrespect," Arrivabene added.

Bottas praises Williams after podium
Valtteri Bottas praised Williams for a "really good" strategy and pit-stop as he finished on the podium at the Canadian Grand Prix.

Bottas, who started back in seventh, capitalized as both Red Bull drivers and the Mercedes of Nico Rosberg switched to two-stop plans.

Bottas' third-place finish is his second in a row at the Circuit Gilles Villeneuve, and marks Williams' first rostrum of the 2016 campaign.

"I felt I was pretty on it today, so it's great to be here [on the podium].

"I really want to thank Williams, everyone made an amazing job."

Bottas hopes that more podiums will follow for Williams in future races.

"It's difficult to say, it's going to always depend a little bit on the track," he said.

"For the next few races this gives us a lot of confidence. We are a good team and we can do good results, so there's no reason why we cannot be on the podium again this year.