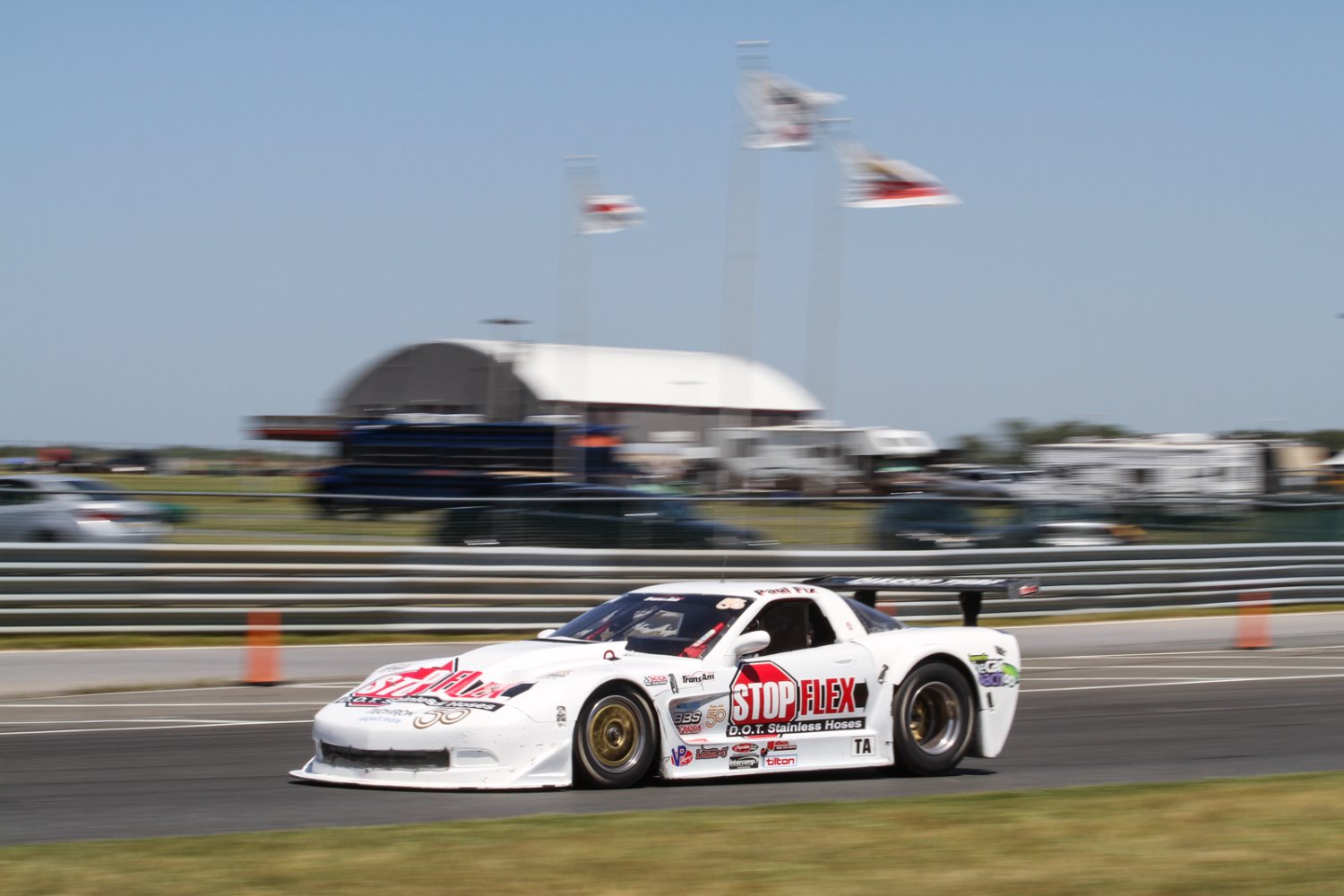 Paul Fix, in the No. 50 StopFlex.com/ TheCarCoach.com/ Chevron Techron Chevrolet Corvette, secured his first victory of the year at New Jersey Motorsports Park (NJMP) in Round 4 of the 2016 Trans Am Championship, taking the lead with only two laps remaining. Fix was joined in victory by Andrew Aquilante in TA3 and Ernie Francis, Jr., in TA4 in the 27-car, 101.25-mile multiclass race.

Amy Ruman, in the No. 23 McNichols Company Chevrolet Corvette, led 39 of the 45-laps of the race with Fix holding second position from lap 12 onward. Ultimately with just two laps remaining, the duo, who had separated themselves from the remainder of the TA field, were held up by lapped traffic; and with Ruman delayed on her line, Fix capitalized, making his move on the inside.

“There were a few opportunities for the lead," said Fix. “I knew that traffic was going to come in to play, as it always does here, with there only really being one good passing opportunity at full song, which is in turn one. And it was just perfect timing; I was in the right place at the right time, stuck it right next to her and capitalized in turn 2 and away I went. The race came down to waiting for that great opportunity."

While Fix battled for the championship down to the wire in 2015, he was quick to downplay any talk of momentum and another championship charge.

“I’m a long way back, and I think I’m just going to take it race by race at this point," said Fix. “We can’t start thinking of how many points we need in each race, that’ll just cloud us and burden us with too much drama. We’re just going to go race by race, go for wins and see what happens at the end of the season. That’s the only thing we can do."

Ruman, despite being contacted by a lapped car, was able to hold on to secure second place on the podium—her third podium appearance of the year, keeping intact her considerable points lead. However, the result also snaps Ruman’s three race winning streak at NJMP that dates back to 2012.

Joining Fix and Ruman on podium was pole sitter Cliff Ebben, in the No. 36 Stumpf Ford/ McMahon Group Ford Mustang, who held third position for the vast majority of the race after conceding first to Ruman five laps in, and second to Fix 11 laps in.

In TA3, Andrew Aquilante led every lap of the race from behind the wheel of the No. 32 Phoenix/Hawk/Penske Chevrolet Corvette, despite having to fend off heavy challenges early on from Randy Mueller, in the No. 0 Bizbloom.com BMW M3.

“Today’s race was all about getting through the start and the restart clean and not making any mistakes," said Aquilante. “Randy and I went side by side into the first few corners, a little bit of a fight, got around and down into turns 3 and 5 and then took off, set sail, and tried to keep it clean."

Mueller would finish second; while his Epic Racing teammate Michael Camus, in the No. 08 Bizbloom.com BMW M3, finished third—securing yet another series of podiums for the team’s championship pursuits. Mueller currently leads the standings while Camus is secure in second place.

In TA4, Ernie Francis, Jr., in the No. 98 BetaTools/Liquid Performance Ford Mustang, captured his fourth win of the year, continuing his absolute dominance of the class en route to what could be a third consecutive championship for the 18-year-old driver.

“Our race was pretty smooth from the start," said Francis. “We were in the lead and just kept the gap. We were able to hold our position until the yellow came out, which helped us. The second place car was pretty much a full lap behind us, so from then on it was just smooth sailing despite the track being fairly slick and a lot slower than it was yesterday. I just stayed patient with it and didn’t push too hard."

Francis was joined on the podium by his primary challenger for the championship, Brian Kleeman, in the No. 07 DWW Motorsports Ford Mustang, who finished second to remain within striking distance of the No. 98 in the points. The TA4 podium was completed by Todd Napieralski, in the No. 39 Tremec/SKF/Backstreet Performance Chevrolet Camaro, making his first top three finish of the year.

Tim Kezman, in the No. 4 Fall-Line Motorsports/Calypso Porsche 997, was the sole representative of the TA5 class.

The Trans Am Series also held a TA2 standalone race earlier in the day at NJMP for Round 4 of the 2016 Trans Am Championship, which was won by Tony Buffomante with Dillon Machavern finishing second and Gar Robinson finishing third. Full coverage of that race can be found at gotransam.com.

The Trans Am Series will next head north to Brainerd International Raceway for Round 5 of the 2016 Trans Am Championship, the Ryan Companies Independence Day Classic, on July 2-3.