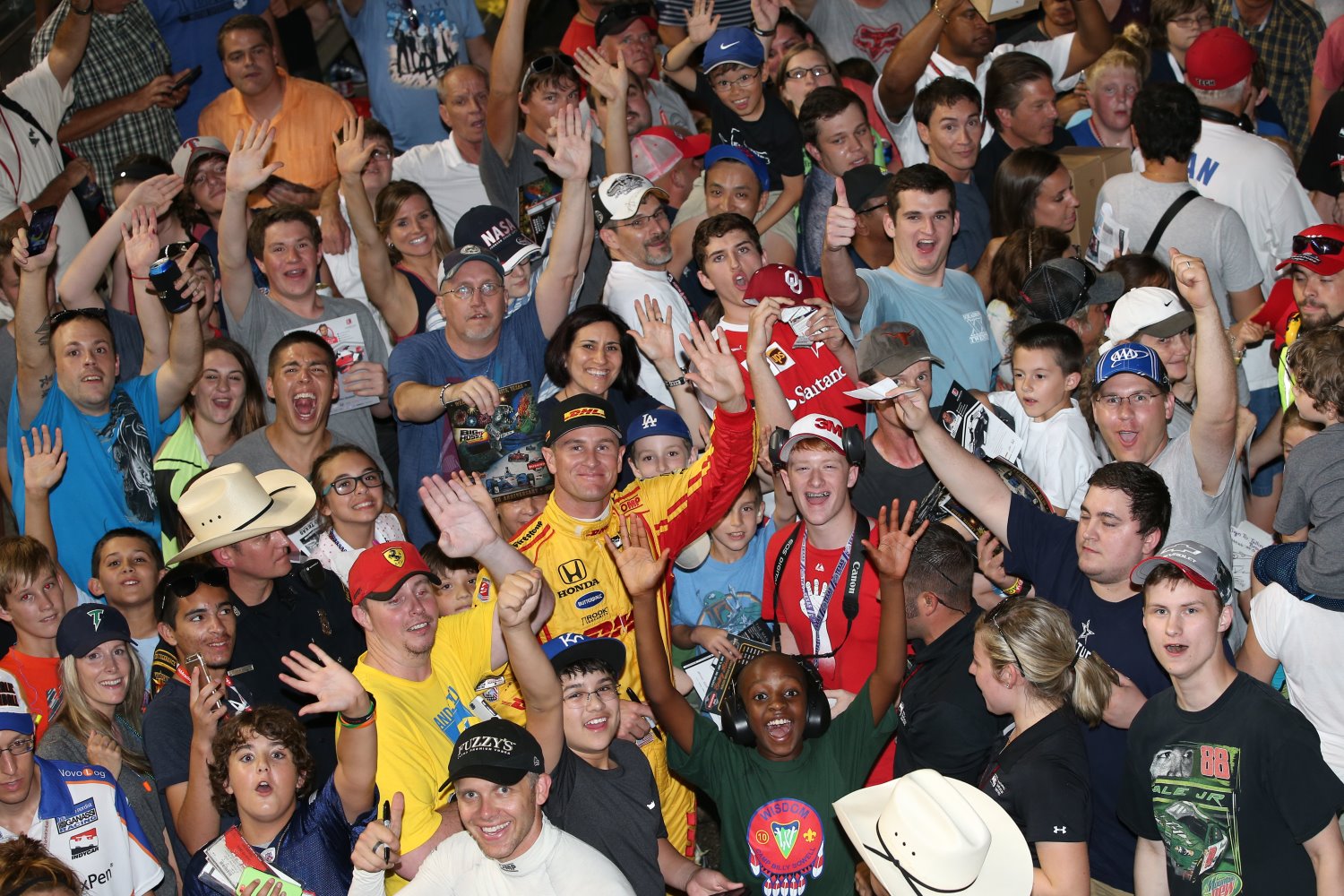 The Firestone 600 may have been postponed due to lingering wet track conditions at Texas Motor Speedway, but Verizon IndyCar Series drivers still made the night memorable for many of the patient fans at the track.

Daylong rain saturated the 1.455-mile oval Saturday, and INDYCAR and track workers were unable to get the track suitably dry before announcing the postponement at 11:30 p.m. ET. The 248-lap race, the ninth of 16 on the 2016 schedule, is set to take the green flag at 2:15 p.m. ET Sunday and will be telecast live beginning at 2 p.m. on NBCSN and the Advance Auto Parts INDYCAR Radio Network.

"Texas is always cool because it's a night race, and we were going to have a cool, sparky fireworks show with the skid blocks hitting in Turn 1," said James Hinchcliffe, driver of the No. 5 Arrow Schmidt Peterson Motorsports Honda. "I feel so bad for the fans who came out and sat around here all day waiting for something to happen.

"It's too bad we couldn't give them a show. We'll take a crack at it (Sunday) and give them a good show. Being a day race, it will switch things up a little, but maybe that will make for a more exciting show."

It marks the first Verizon IndyCar Series race postponed since the first end of the Honda Indy Toronto doubleheader on July 19, 2014. It was run the following day.

Two previous races at Texas Motor Speedway have also been postponed. The June 2000 night race was rained out and run the following day. The season-ending race scheduled for Sept. 15, 2001, was postponed following the 9/11 tragedies and run on Oct. 6.

"It was awesome," Hinchcliffe said. "We got mobbed. It was overwhelming. It's so great that so many people stuck it out as long as they did. The least we could do was jump up there and say thanks and sign some autographs. The response was great. Texas definitely loves INDYCAR."

Disappointed in having his first race at Texas delayed by a day, Rossi still enjoyed visiting with the fans.

"I thought (the race) was going to be pretty spectacular under the lights," Rossi said. "I was looking forward to it and it would have just added to the effect of the race. Big shout-out to the fans that stayed. I was glad to get up there and spend a bit of time with them. Hopefully, they'll all come back (Sunday). It will still be an exciting show for the fans, just a bit more challenging for us drivers."

Tickets from Saturday will be honored for Sunday's race. Gates will open at Texas Motor Speedway at noon ET, with tickets available for purchase at Gate 4. For more information, visit texasmotorspeedway.com.

Four members of the Dallas Cowboys got an inside look at the Verizon IndyCar Series as a guest of driver Graham Rahal at Texas Motor Speedway. Offensive lineman Tyron Smith, first-round draft pick and running back Ezekiel Elliott, quarterback Dak Prescott and defensive back Jeremiah McKinnon toured the team's pit box and got up close to Rahal's No. 15 Mi-Jack/RLL Honda.

"It's good to have these guys out here," Rahal said. "It's fun to have them come and join us for a race. It's kind of in their backyard since they're now with the Cowboys. I'd rather have them see a good, clean show than all these delays, but it's good to see they're having some fun."

Rahal even had some fun at the expense of Team Penske crew member Quinton Washington, who played defensive tackle at Michigan, pointing him out to Elliott, who starred at running back for Ohio State. Rahal, an Ohio native is an avid Buckeyes fan.