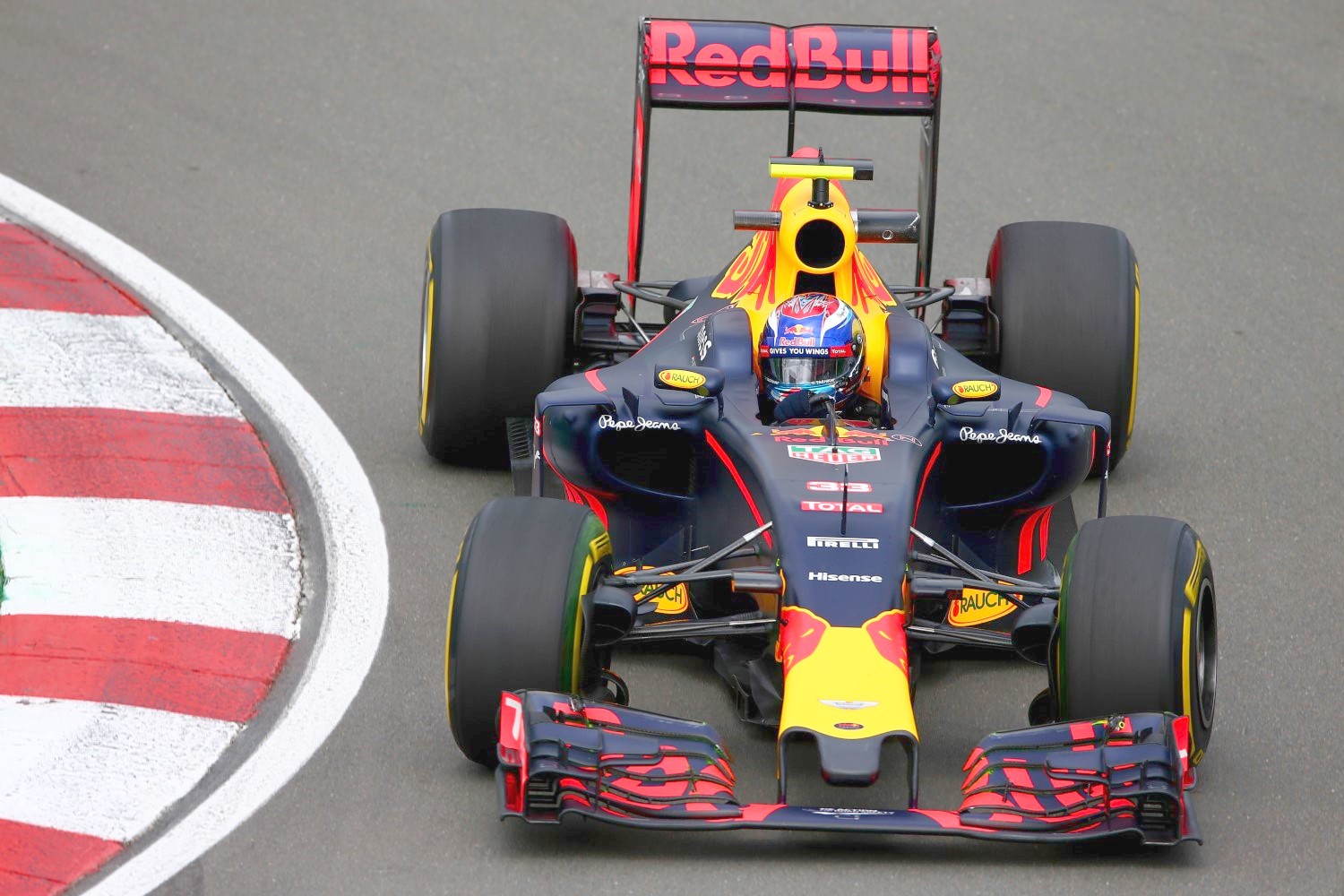 Verstappen not ashamed to trail Ricciardo
(GMM) Max Verstappen has suggested he feels no shame in being outperformed in the last couple of race weekends by his teammate.

That is despite the fact that, on Red Bull debut in Barcelona, the 18-year-old Dutchman actually won.

"It was impressive," admits Daniel Ricciardo, his teammate. "In a new car with a new team.

"In a sense it made our relationship a bit more intense," the Australian is quoted by the Dutch newspaper De Telegraaf, "but we are wise enough to use that in a positive way to make both of us better."

Not only that, Verstappen crashed not once but twice in Monaco.

"My father was angry," Max smiled to the Swiss newspaper Sonntagsblick. "He said I wanted too much, and he is right. His advice is very important to me."

But Max also suggested that he feels comfortable with where he is at the moment, despite being out-paced by Ricciardo for the third consecutive time in Canada.

"I'm next to a very experienced driver and one of the best in the entire field," Verstappen is quoted by Speed Week in Montreal. "I see it that I'm already so close to him in the third race weekend is positive.

"Many people seem to forget that I've only just joined the team and don't yet have the pace that I want."

The teenager continued: "Even if I was able to win a race, I see this year as a learning year, with the objective to get used to the car and get the most out of the package."

Haryanto may stop Muslim fasting for race day
(GMM) Rio Haryanto's religious beliefs may need to take a back seat to safety in the Canadian grand prix on Sunday.

The Indonesian rookie is a strict Muslim, and therefore currently fasting – including not drinking water – between dawn and sunset.

But the Mirror newspaper quoted Haryanto's manager Piers Hunnisett as admitting that Ramadan might need to take a back seat to safety when it comes to Sunday's long and high-speed race on the Circuit Gilles Villeneuve.

"He has been following his faith in Montreal this week but we will see what the advice of the team doctors is. It is a long race and there is a worry about dehydration.

"Drivers lose a lot of body fluid during a race and we don't want him losing concentration when he is driving at 350kph," Hunnisett added.

There have been reports the talks have hit a snag because while Rosberg wants a multi-year deal, Mercedes is only offering him a contract for 2017 only in order to leave the door open for Pascal Wehrlein's debut the year after.

"Everything is going according to plan," Berger, who is conducting Rosberg's negotiations on his behalf, told the German broadcaster Sky.

"Both sides have the same goal — to see Nico at Mercedes for many years. There are only a few points on which we need to come to an agreement."

Mercedes team chairman Niki Lauda agrees that, amid the current talks, he is optimistic.

"I can reassure everyone," the F1 legend said. "The negotiations are going very well. In a relatively short period of time, everything will be done."

It is rumored that, with Rosberg wanting three years but Mercedes only offering one, a two-year compromise contract is now being discussed.

"The ball is now in Mercedes' court," Berger confirmed to Germany's Auto Bild.

The former Ferrari and McLaren driver suggested that Mercedes would be wise to stick with Rosberg, given the less stable lifestyle enjoyed by the team's other driver, Lewis Hamilton.

"When you hear how many times he (Hamilton) jets between America and Europe between races, and think of the effort and energy that 1000 people put into a race weekend, it is important that they have the perfect balance in the team," Berger told Bild am Sonntag newspaper.

"In Rosberg, they have an equally good driver from the sporting point of view and also highly reliable," he added.

There have been rumors that, should the parties not agree, Rosberg is open to speaking with Ferrari.

"Both Red Bull and Ferrari have come to understand that you need to drivers of the caliber of Hamilton and Rosberg to be constructors' champion," he said.

"That's why Red Bull has put Verstappen in there so quickly, so Ferrari must react quickly. And they will."

But would the very Italian Ferrari really pair two Germans together in 2017? "Bernie Ecclestone would say that Nico is from Monaco," laughed Berger.

Former Ferrari greats question team resurgence
(GMM) Two former Ferrari drivers are not sure when the great Maranello team will rise to the very top of formula one once again.

Gerhard Berger raced for the Italian marque in the era immediately preceding the famous Michael Schumacher days, where the German won five consecutive world championships in the first half of last decade.

When asked if Sebastian Vettel can now do the same, Berger answered: "In formula one, you never known.

"It may happen quickly, or it may not happen at all," the Austrian told the German Sunday newspaper Bild am Sonntag.

"What I do know is that I worked at Ferrari for many years and I was in exactly the same situation as Vettel is now — sometimes I won, but mostly I did not.

"There is always a lot of pressure from above," Berger explained. "Jean Todt managed to lead a team with Michael Schumacher and Rory Byrne and Ross Brawn that shielded this pressure from top to bottom and so it was a very successful time.

"But it seems to me as it Ferrari is back where it was with me: Italian confusion," he added.

Another driver who knows the highly political Ferrari of the pre-Schumacher days well is Alain Prost, who joined in 1990 but a year later was fired for criticizing the car and team.

When asked by Minute-Auto.fr about Ferrari's current struggle to return to the top in F1, Prost said: "I can sum it up in one sentence: real stability at Ferrari is very difficult.

"We see that when there is this nervousness, this is not a team that manages it in the best way," he explained.

"This is a team that needs confidence to move forward and become again the steamroller that it was in the time of Todt, Brawn and Schumacher," said Prost.

Ricciardo, Perez bosses say 'hands off' to Ferrari
(GMM) Red Bull and Force India have issued a firm 'hands off' amid speculation Ferrari is shopping around to replace Kimi Raikkonen.

Team boss Maurizio Arrivabene recently declared that Raikkonen alongside Sebastian Vettel is an "ideal pairing" for the Maranello team, but the 36-year-old notably struggled in qualifying for the Canadian grand prix.

It will only magnify speculation that Daniel Ricciardo, who drives for Red Bull, and perhaps even Force India's Sergio Perez, might be in line to succeed the 2007 world champion.

Ricciardo was not halting the rumors in Montreal when he suggested he might not be loyal to Red Bull forever.

"The only place I want to be is somewhere they can say 'Yep, you can fight for a world title with us'," the Australian said. "That's all I really want."

However, Ricciardo's boss says the on-form 26-year-old is going nowhere.

"Ricciardo will definitely be with us until 2018," Dr Helmut Marko told Germany's Auto Motor und Sport. "We have a contract with him."

Issuing a similar 'hands off' is Force India's sporting director Otmar Szafnauer, amid suggestions Monaco podium-getter Sergio Perez might get a second chance at joining a top team.

"Sergio is ours," Szafnauer insisted. "If Ferrari want him, they would have to pay us a lot of money."

Hamilton excited by Ferrari battle in race
Mercedes' Lewis Hamilton says he is looking forward to a battle with Ferrari at the Canadian Grand Prix after a tight qualifying session.

Hamilton beat team-mate Nico Rosberg to pole position at the Circuit Gilles Villeneuve by 0.062s, with Vettel only a tenth further back.

Ferrari spent two more of its engine development tokens ahead of this weekend's event, focused on the turbo element of its power unit.

"Ferrari have obviously picked up the pace with their upgrades," Hamilton commented during the post-qualifying press conference.

"This is a great track to test ultimate speed, so we're excited to have a race with them. Their long runs looked very strong. I don't know if they were stronger than ours – we'll see tomorrow."

Hamilton admitted to mistakes on his best Q3 lap, but said pole position was all that mattered.

"I had a much bigger gap during practice [on Friday]. Today I didn't have pace that I had yesterday, but we did enough [for pole position]. There was definitely more time in it, though.

"It's going to be interesting tomorrow, but this is the best place to start, for sure."

Vettel: I thought pole was possible
Sebastian Vettel says he entered Canadian Grand Prix qualifying with the belief that he could beat the Mercedes drivers to pole position.

Vettel topped a shortened final practice, but fell behind Lewis Hamilton and Nico Rosberg in qualifying, finishing 0.178s down on top spot.

"Going into qualifying I thought it was possible," said Vettel.

"On my last lap I was very happy in general, though maybe a little bit greedy out of Turn 10, not greedy enough into Turn 6. But there wasn't a lot to grab otherwise.

"I wanted to get below the 1m13s mark as I knew that it would be very close with Mercedes. I did that but missed out by one hundredth, so that little bit missing."

Vettel praised Ferrari for the engine upgrade it introduced this weekend.

"Overall I think we have a great car, we did a step, so I'm happy with how the weekend has turned out. I feel in general very comfortable and enjoyed qualifying," he commented.

Kimi RÃ¤ikkÃ¶nen finished sixth in the sister Ferrari as he completed just one run.