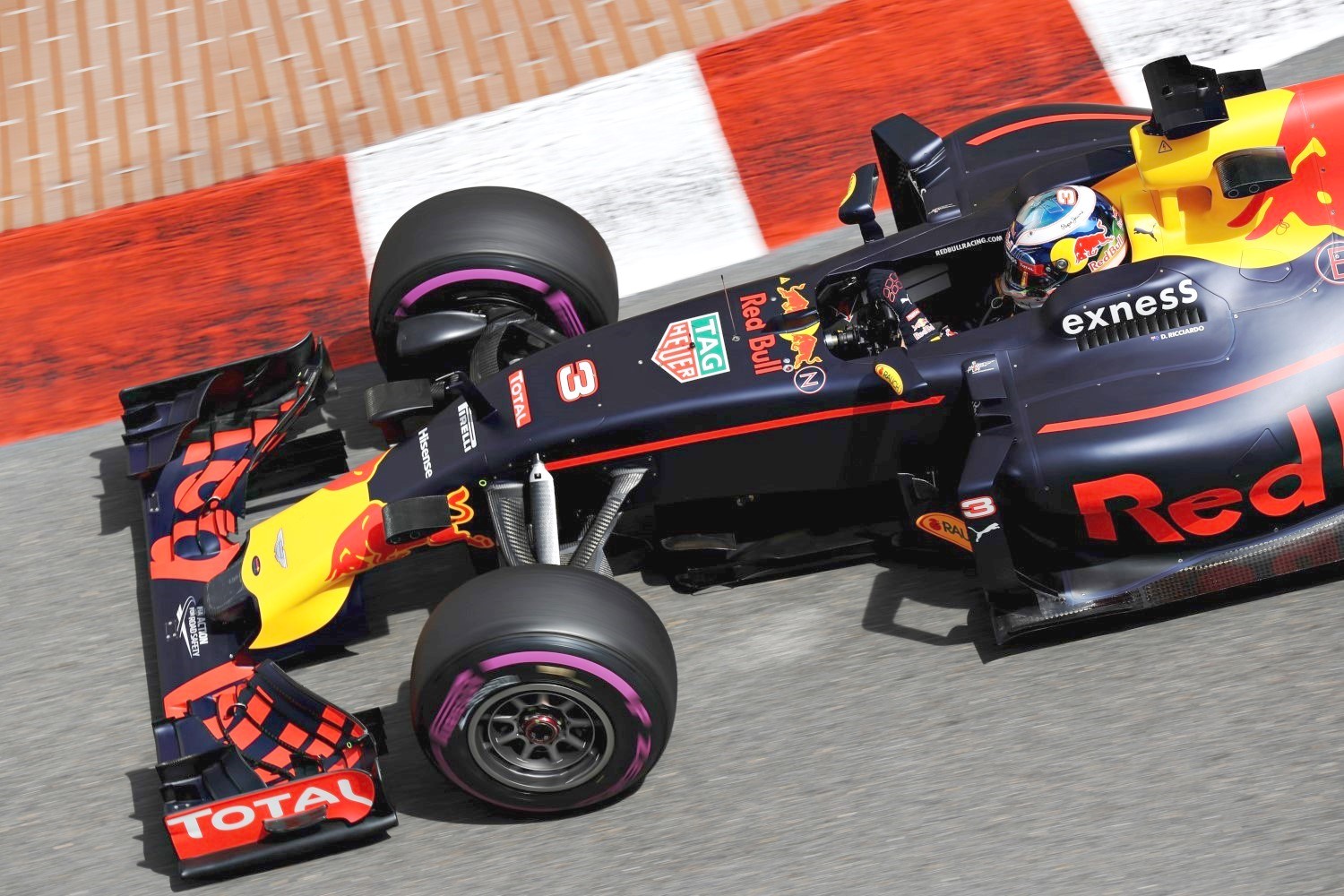 Red Bull brings short nose, new procedures to Canada
(GMM) A new, shorter nose is not the only change Red Bull has made ahead of the Canadian grand prix.

The team has also brought some software and procedural changes to Montreal, in the wake of the bungled pitstop that cost Daniel Ricciardo victory in Monaco.

The Australian was furious after Monaco but he said on Thursday: "I think more important than how to move on is how to make sure it doesn't happen again.

"I knew they were going to take it seriously but I've been assured that if we're in that position again then it won't happen, so that was obviously what I needed and what I wanted to hear," Ricciardo added.

It is a crucial weekend for Red Bull, with both Ricciardo and Max Verstappen now equipped with Renault's engine upgrade that will be put to the test on the demanding straights of the Circuit Gilles Villeneuve.

"This race will tell us about the rest of the season," Ricciardo is quoted by Auto Motor und Sport. "If we are competitive, we can fight anywhere."

Too early to reveal 2017 driver plans – Arrivabene
(GMM) Maurizio Arrivabene has dropped yet another hint that Ferrari is seriously contemplating keeping Kimi Raikkonen in the team beyond 2016.

"I am satisfied with the work of both of them," the Italian told the Finnish newspaper Turun Sanomat.

"I think it's too early to start making any decisions for next year. Look at MotoGP, with Ducati announcing Jorge Lorenzo for next year when this season's championship has only just begun," Arrivabene added.

"If you ask whether we have made any decisions for 2017, the answer is no," he said, "and even if we had done so, it would not be the right time to reveal it now."

In Thursday's official FIA press conference in Montreal, Raikkonen played down the rumors, saying only that he would be "happy" to stay at Ferrari beyond 2016.

But later, in an interview with F1's official website, he hinted that he knows more than that.

"I know that will not stop any rumors — but I also know that the future will prove many people wrong! But: my lips are sealed!" Raikkonen added.

Vettel has 'nothing against' Ricciardo as teammate
(GMM) Sebastian Vettel on Thursday said he would not mind being reunited in a team with Daniel Ricciardo.

Australian Ricciardo, furious with Red Bull after bungled strategies in Barcelona and Monaco, has been linked with a move to replace Kimi Raikkonen at Ferrari.

"It's always nice if other teams show interest in you," he is quoted by Spain's El Mundo Deportivo. "It's a compliment.

German Vettel has made it clear he wants Raikkonen to remain his Ferrari teammate in 2017, but he also said reuniting with his former Red Bull colleague would be acceptable.

"He is a strong driver and 2014 was a successful year for him, even though last season he ran into some difficulties. This year, it is difficult to judge because I don't know what is happening in his team, but I have nothing against him," Vettel added.

Ferrari has brought several upgrades to Canada, most notably a revised turbo design, but Vettel said the media's reaction to a couple of less impressive races recently has surprised him.

"Yes, that it was blown up by the outside surprised us," he said.

"We are not looking for excuses but there are reasons that we could not show what we can do; some within our power and some not.

"We have aggressively tried to close the gap to Mercedes and also paid a price for that."

Rosberg contract talks about Mercedes 'strategy'
(GMM) The first sign of trouble in Nico Rosberg's negotiations with Mercedes has emerged.

Earlier, both the German outfit and the 2016 championship leader have indicated they are likely to continue working together beyond the expiry of Rosberg's contract this year.

It was thought any wrangling would be about Rosberg simply upping the value of his retainer, but Gerhard Berger said: "It's not about money. It's about something else."

Berger, the former F1 driver and BMW and Toro Rosso chief, has been brought in by Rosberg and his father Keke to handle the negotiations with Mercedes.

Germany's Bild newspaper claims the uncertainty about a new deal for Rosberg is indeed less about money and more to do with whether Mercedes wants to promote its young charger Pascal Wehrlein from Manor.

The team might therefore be happy with a mere one-year deal for Rosberg next year, but Berger and the 30-year-old is pushing for a full three-year extension.

Berger said: "We need to agree with the strategy that they (Mercedes) want to go with for the future. If they agree, then we can negotiate."

Although he ultimately stayed at Williams, the Finn was linked last year with a move to Ferrari, the fabled Italian team that is once again surrounded by rumors it may be on the market to replace Kimi Raikkonen.

"I am personally interested in what is happening on the driver market, but for now it's still pretty quiet," Bottas, 26, is quoted by the Dutch publication Formule1.

"If there are as many rumors as there were last year, I guess I should be better able to deal with it now," he added.

When asked about whether he could once again be linked with Ferrari, Bottas said he is "not really saying anything" this time around.

And as for whether talks with Williams have already started, he replied simply: "No.

"I'm sure we'll talk soon, but as for the exact timing there is no urgency at the moment. We'll see."

Verstappen denies feeling pressure after Monaco
(GMM) Max Verstappen has played down suggestions his crash to earth in Monaco a fortnight ago has ramped up the pressure of his recent move to Red Bull.

After winning on his team debut in Barcelona, the 18-year-old Dutchman then had an awful weekend in Monaco with two high-profile crashes, just as teammate Daniel Ricciardo stepped up his already sensational recent form.

"In Monaco it was not as positive a weekend but we must move forward," Verstappen told the Spanish broadcaster Movistar.

"We start again here in Canada. I haven't thought much about what happened in Monaco but we will try to do better next year. Sometimes you have ups and downs — it's part of the learning process.

"More pressure? I don't think so. I feel quite comfortable. I'm enjoying what I do," he insisted.

Verstappen explained that, notwithstanding his Barcelona win, it will take him some time to fully adjust to the Red Bull car, having switched mid-season from Toro Rosso.

But he said that even though he crashed twice in Monaco, he is not now afraid of coming unstuck against Montreal's fabled 'Wall of Champions'.

"Whether you race for eighth, second or first, you always attack," said Verstappen. "I will not hold back."

He said he is particularly happy he will have Renault's new-spec engine this weekend, after only Ricciardo enjoyed its extra power in Monaco.

"That will help a lot," Verstappen is quoted by the Dutch publication Formule1.

Le Mans winner not eyeing F1 switch
(GMM) A reigning winner of the fabled 24 hours of Le Mans says he is not keen on pushing for an opportunity to race in formula one.

Last year, one of Nico Hulkenberg's winning teammates at Le Mans for Porsche was Earl Bamber, a 25-year-old New Zealander who told Britain's Sun newspaper that F1 is lacking "structure".

"There are no professionals in there anymore, only people who want to pay money, and the problem is the cars are too focused on engineering," he said.

"If you are rich you can pay to win. There are only a few seats – Ferrari, Mercedes, Red Bull, where you make good money – the rest, everyone pays," Bamber added.

He said that for those reasons, he is no longer interested in F1 despite dreaming as a child of racing at the pinnacle of motor sport.

"I would never race in F1. It has changed a lot for me since I was growing up.

"There used to be more factory-supported teams — Ferrari, Honda, BMW. There were seven or eight competitors but now there are like three.

"Maybe it changes in a few years but for me at the moment I would not look at F1 — unless Ferrari come calling!" said Bamber.

Kvyat denies need for psychologist
(GMM) Daniil Kvyat has played down suggestions he might benefit from employing a psychologist.

Amid his own career turmoil a few years ago, Romain Grosjean turned to a sports psychologist for help and is now regarded as one of F1's best drivers.

"No," Russian Kvyat said in Montreal when asked if he has thought about doing the same.

The 22-year-old recently lost his seat at Red Bull and since then has suggested he might move away from the energy drink company completely beyond 2016.

But Kvyat insists: "I was able to cope with the situation surprisingly well. A psychologist would help you focus on the main things but I'm doing that already.

"I believe you need to solve the problems in your life by yourself," he added.

However, some believe Kvyat's most recent behavior has lessened the chance he might hang onto his Toro Rosso seat for 2017, just as the team is set to switch to more competitive Renault power.

"I already spoke on this subject in Monaco and it's still relevant," he said.

"For now I'm fully concentrated on this season and I will think about the future later."

"Toro Rosso is already good place to be and next year with the Renault engine it looks even better," he is quoted by the Dutch newspaper De Telegraaf.

"It's still early but everything seems to be going well," Sainz added.

Honda had a woeful return to F1 last year but Spaniard Merhi, who raced last season for Manor, said he has been impressed with the steps forward taken in 2016.

"In my opinion, Honda is progressing faster than expected," he told the Spanish sports daily Marca.

"In Monaco, where engine power does not play such an important role, it seemed to be that McLaren is inferior to the leaders in the effectiveness of the chassis," Merhi added.

In Canada, Honda is pushing forward with a new turbo specification, allied with new fuel from McLaren partner ExxonMobil that brings a further 0.1 second boost.

"The new turbo should allow us to use the energy more efficiently," Fernando Alonso confirmed. "It is not about raw performance but in certain race situations it is important that we can release more energy.

"That will also reduce our fuel consumption," the Spaniard added.

In the past few days, comments attributed to Alonso have suggested he is only committing to F1 and the team until the end of his current contract next year.

Alonso said he is definitely staying next year, though, which is more than can be said for teammate Jenson Button who is linked with a potential move to Williams.

When asked on BBC radio if he is enjoying F1 and will still be there in 2017, Button answered: "At this moment in time, I am loving it. The second part of your question, I can't answer."