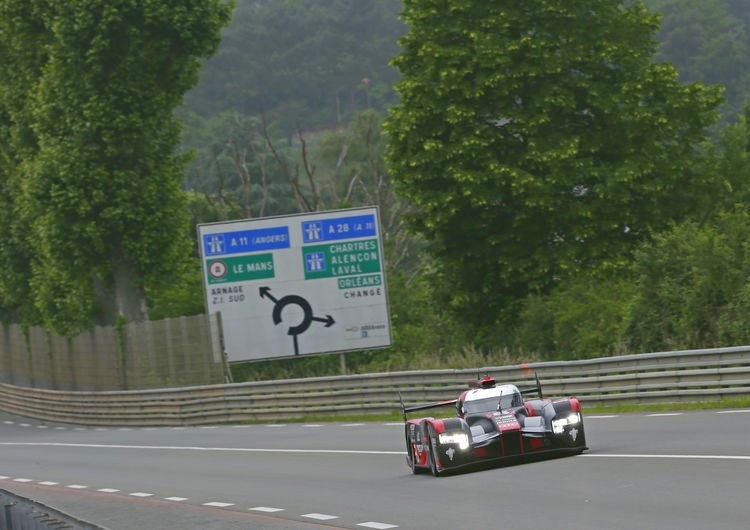 The two Test Day practice sessions take place two weeks before the actual race and are important for the 60 teams to find their feet on the unique circuit. When the session began at 09:00, most teams sent their cars out straightaway to make the most of the allotted time to test their settings and collect data for their technicians and engineers. It only took a few minutes to “rubber in" the track and render the traction optimum and drivers began setting respectable times right from the start. At 09:15 Marcel Fassler set a sub 03:30 lap, which was subsequently beaten by both Romain Dumas and Mark Webber, who ended the morning session on 03:22.555.

In the end Lucas di Grassi clocked the fastest lap in the #8 Audi, on 03:21.375. That is not as quick as Neel Jani’s pole position time of 03:16.887 but it has to be said that last year times improved by four seconds between the Test Day and the qualifying sessions.

Performance aside, the key information to note at the end of this Test Day is that the three favorites are neck and neck. The Toyotas were by no means dazzling, but the fastest is only two seconds behind di Grassi’s best lap. As far as reliability is concerned the #7 Audi seems to have suffered from a jammed shock absorber for several minutes. At the end of the day, it’s difficult to say who of Audi, Porsche and Toyota has the upper hand.

If it is shaping up to be anyone’s race for the overall win, what about LM P2 where every one of the 23 entrants has a chance of taking the class title? Oreca came out on top of the day’s proceedings with Tristan Gommendy’s time of 3:37.397. At the opposite end of the spectrum, Michael Shank Racing ended the day with its Ligier-Nissan going off at the Michelin chicane with Oswaldo Negri Jr at the wheel. The accident brought Test Day to a premature end as the safety barrier could not be repaired within the 30 minutes that remained.

In GTE Pro, all eyes were on the armada of four Fords making their big comeback to Le Mans, but Antonio Garcia in a Corvette (3:55.122) stole the limelight. In this class too, the actual race promises to be a hotly disputed affair with 13 cars within two seconds of each other.

Corvette Racing ended the Le Mans Test Day with the fastest time in the GTE Pro class as Antonio Garcia set a lap of 3:55.122 (129.680 mph) in the No. 63 Konica Minolta/Mobil 1/Sirius XM Chevrolet Corvette C7.R. Garcia, who celebrated a birthday Sunday and will team with Jan Magnussen and Ricky Taylor, led a Corvette Racing effort that focused on race setup and strategy as the team works toward what it hopes will be a ninth victory at the French endurance classic.

Both Corvettes were among the four fastest cars in what should be a highly competitive fight in GTE Pro. Oliver Gavin in the No. 64 Corvette C7.R was fourth-fastest with a lap of 3:55.837 (129.245 mph). He, Tommy Milner and Jordan Taylor are the defending class winners at Le Mans, and Gavin and Milner won the Rolex 24 At Daytona and the Mobil 1 Twelve Hours of Sebring to open the season.

Both Corvettes recorded significant mileage around the 8.5-mile Circuit de la Sarthe. The No. 64 Corvette turned 81 laps while the No. 63 Corvette posted 73 laps. The entire day was run in warm, dry conditions which allowed the team to maximize its efforts to find the best race setup for the 2016-spec Corvette C7.Rs.

Sunday marked the first time at Le Mans for the cars, which feature a number of changes from 2015 including a larger splitter at the front and diffuser at the rear of the Corvette. Side skirts and a repositioned wing also are among the most notable changes, along with updated safety features that are now mandated on all GTE Pro cars.

Finally, in GTE Am, Larbre Competition’s Corvette finished the day at the top of the standings. The French team also used Test Day to put two drivers, Jean-Philippe Belloc and Nick Catsburg, through their paces One of them will stand in for Paolo Ruberti, who fractured his spine in a recent accident at Hockenheim.

The next date in the diary for the 180 drivers will be the traditional Scrutineering sessions in Le Mans city center on 12–13 June. The general public will have an opportunity to get up close to the 60 cars as they arrive in Place de la Republique where they will be thoroughly examined by the scrutineers.