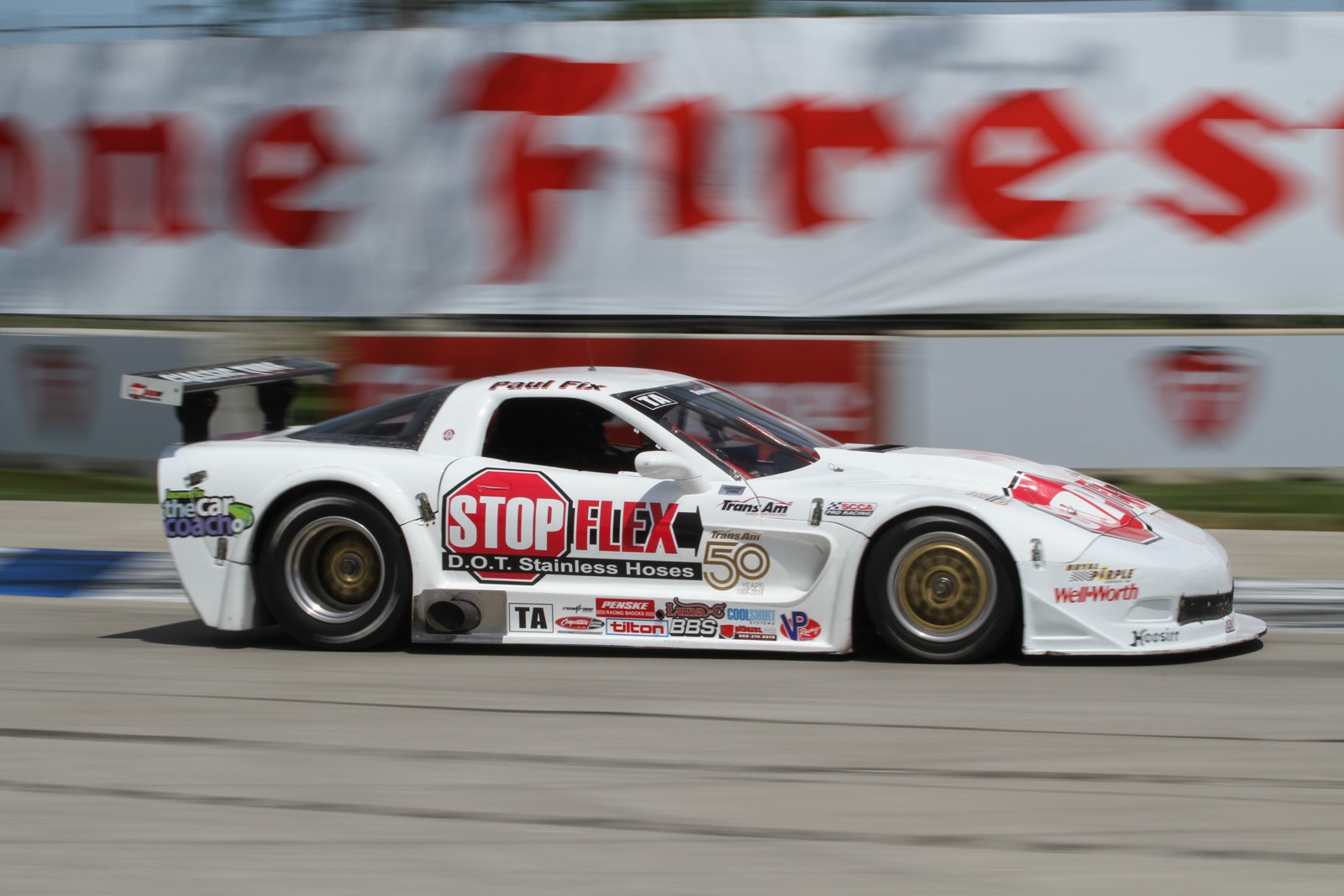 Paul Fix, driver of the No. 50 StopFlex.com/ TheCarCoach.com Chevrolet Corvette, will start on pole for Dual 1 of the Motor City 100, presented by 3-Dimensional Services, tomorrow, Saturday June 4, as the Trans Am Series makes its return to Detroit in the Chevrolet Detroit Belle Isle Grand Prix. Adam Andretti and Dean Martin will also start on pole in their respective classes, TA2 and TA4.

Fix's pole came courtesy of a 1:34.613 lap around the 2.360-mile Belle Isle Grand Prix Circuit, beating out RJ Lopez by just over a tenth of a second for the top spot on the Trans Am grid. Lopez turned a 1:34.774 lap behind the wheel of the No. 06 Optica Lopez/Republica Brewing Chevrolet Corvette, still strong enough to start alongside Fix come tomorrow.

"It's great to have Trans Am back in Detroit," said Fix. "These big muscle cars–this is where they really belong. I'm pleased to have the StopFlex.com, CarCoach.com Chevrolet Corvette on pole, and I feel like we really have a good car here this weekend. We turned a strong lap, but it was also in traffic. Tomorrow, we'll look to get out front, stay clean and ahead of it– I'm confident in putting together a strong performance."

In TA2 Adam Andretti, in the No. 44 ECC/Anchor Bolt and Screw Dodge Challenger, captured pole with a time of 1:38.347 bringing full-circle a lifetime of experiences with Trans Am at the Detroit Grand Prix as he emerged in front of a class qualifying session.

"I remember coming out to the Detroit Grand Prix races with my uncle Mario when I was young," said Andretti. "Trans Am was always racing on the grand prix weekends alongside the open-wheels, and I grew up watching those races. To be here racing in Detroit with Trans Am, it's an honor in and of itself. To be on pole, that's something special. I'm just thrilled and thrilled for our team. They work so hard and to bring this home for Engineered Components Company, Anchor Bolt and Screw and BSN Sports and our crew, it's a dream come true–it really is."

Starting alongside Andretti will be 2013 and 2014 TA2 Champion Cameron Lawrence, in the No. 11 TI Automotive Dodge Challenger, making his first Trans Am appearance in 2016. Lawrence powered the No. 11 around the circuit to the tune of a 1:38.814 lap, giving Dodge a front row sweep for the class.

Defending TA2 Champion Gar Robinson, in the No. 74 PuraVidaTequila/74 Ranch Resort Chevrolet Camaro, will start third, courtesy of a 1:38.880 lap–just short of Lawrence's time. The TA2 class top five was completed by Louis-Philippe Montour and Marc Miller, Lawrence's Stevens-Miller teammates–giving the team three drivers in the top five and Dodge four cars in the top five.

Dean Martin secured the TA4 pole by a comfortable margin, nearly a full two seconds above Brain Kleeman, 1:40.691 to 1:42.526, who will start alongside him in tomorrow's race. Martin, who calls the Detroit area home, is proud to carry on the heritage of production racing in Detroit.

"It's great to be on pole here at home," said Martin. "I've been racing on this course for awhile now, and it's great to see this legacy of American muscle production racing continue in Detroit, where it belongs. I'm looking forward to the race and we're starting in a strong position; but as I've said from the beginning, this weekend the driver who wins TA4 will be the one who manages the multi-class traffic best–fortunately, I've raced in series with multi-class formats for some time now."

Kyle Marcelli, in the No. 96 MBRP Performance Exhaust Chevrolet Camaro, had his times disqualified after technical inspection after the No. 96 was found to not have the series-required restrictor as per 14.8.18 in the series rulebook. Subsequently, he will be moved to the back of the TA2 starting grid.

Fans can keep up with the Trans Am Series throughout the weekend at www.gotransam.com, on Facebook at www.facebook.com/gotransam and on Twitter at @gotransam.