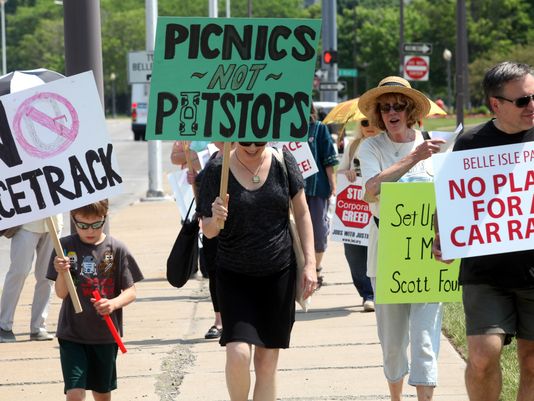 Neighborhood protesters picketing that the Detroit Grand Prix should move from Belle Isle to another local venue because they feel inconvenienced offered the strongest evidence that the racing event has arrived as a highly popular entity.

“That’s a good way of looking at it," said Roger Penske, the visionary behind using the Grand Prix as a means for elevating Detroit’s national profile. “We never want even the tiniest of public unrest and I understand that people will have their own agendas. They’re fighting for something that’s important for them.

"But if we want Detroit to return to being the great city that those of us on the ground here every day know that it is, then it is imperative that everyone work together to achieve the broader picture."

And that portrait isn’t painted without the necessary sacrifices of time, treasure and temperament.

The protesters say they “want their island back."

Do they want it back to what it was prior to the state takeover and infusion of nearly $14 million in private funding since 2007 — thanks to the Grand Prix?

Instead of pit stops, the island was simply a pit. It was dirty. It wasn’t functional.

Belle Isle is becoming a showcase once again with three days of racing starting Friday. What’s wrong with showing it off for a weekend for the world to see?

“It looks absolutely stunning," Grand Prix race chairman Bud Denker said of the island’s progressively improved look over the past five years. “The Scott Fountain is flowing once again for everyone to enjoy. And after this weekend, the structures will be taken down before the fireworks and Fourth of July weekend. Some might not like it, but there’s no denying the positive impact that the Grand Prix has had in changing widespread perceptions about Detroit."

The Grand Prix’s success mirrors the city’s overall efforts in changing its image through the revitalization of natural resources. The races won’t lower crime. They won’t diminish the public school system corruption. But there’s a psychological benefit, an example of what the city can potentially accomplish if it rolls up its sleeves and makes up its mind that it won’t be defeated.

Denker said at Thursday’s Grand Prix luncheon that the race could bring in close to $50 million in revenue this weekend for the city. Prior to the luncheon, Denker insisted that moving the race back to downtown streets, as it was in the Grand Prix’s earlier incarnations with Formula One racing, would be a “detriment to commerce." Moving the race back to the downtown streets would make it more difficult for restaurants, bars and hotels to fully capitalize on the event. And holding the Dual in Detroit elsewhere would deny the city the lavish visuals that helicopter television cameras can provide with a gleaming, sparkling narrative of Belle Isle.

“Detroit has already turned the corner," Penske added. “We’re moving forward. It’s not an easy task. But you can only accomplish that when you’re building something that you know will last. And that’s what being done with the race. I’ve never been more excited about this event than I am right now."

The Grand Prix is a microcosm of Detroit’s mission in altering preconceived thoughts.

This is the city that, administratively, doesn’t work. Too much infighting. Too much taking sides. But didn’t the Grand Prix’s renaissance from three years ago when they couldn’t finish the race because of massive concrete buckles on the Belle Isle course prove what this city can accomplish if everyone works together?

It’s impossible making everybody happy. Detractors are inevitable. But true leadership involves finding a path that’s transparent in its motives and doesn’t lack an inch in conviction that true fidelity means full commitment to what the organizers passionately believe is the proper course.

The Detroit Grand Prix is a resounding success because of that commitment. Drew Sharp/Detroit Free Press