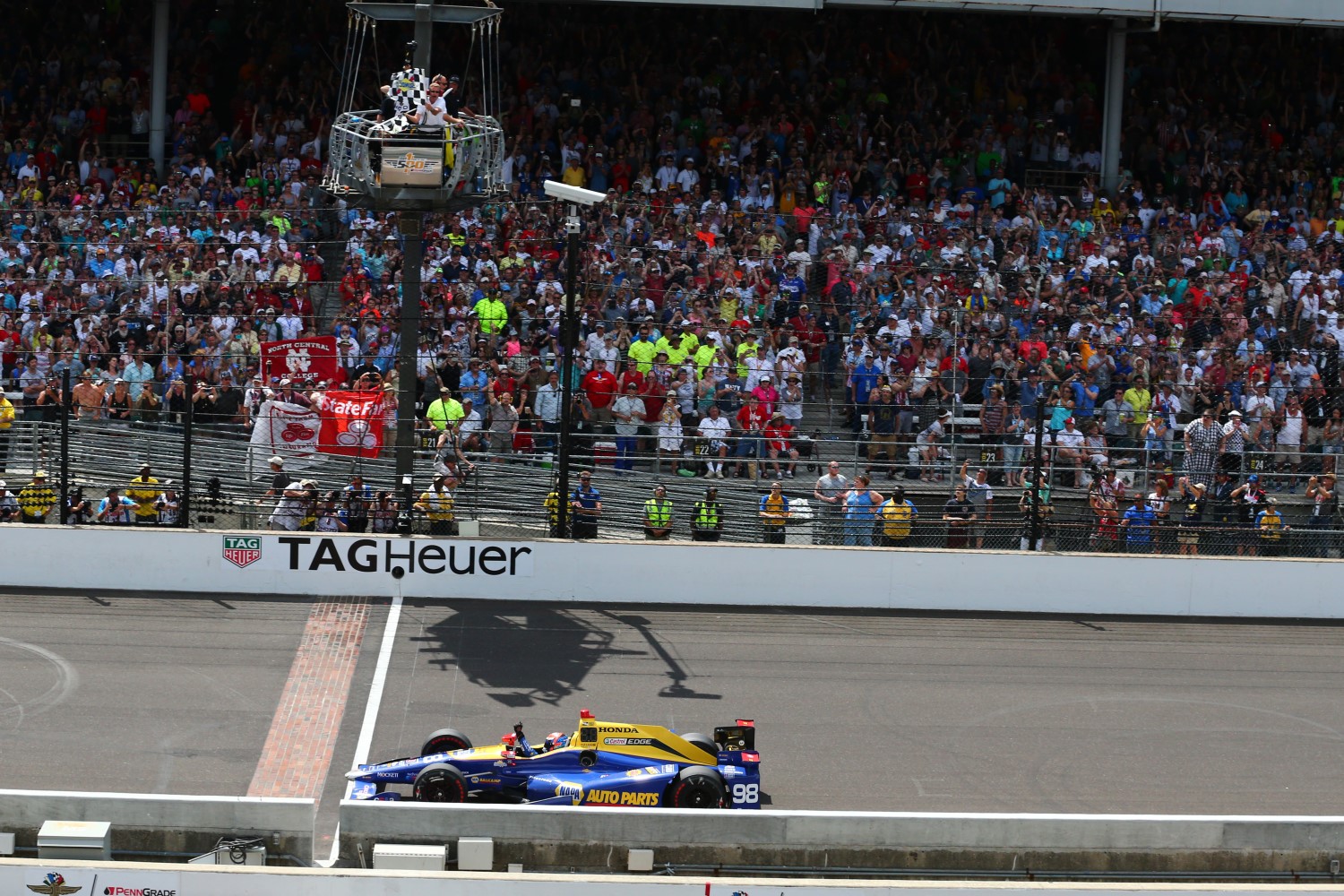 Alexander Rossi won the 100th running of the Indianapolis 500 this past Sunday.. Wait, who? Alexander Rossi? Who’s that? Isn’t he the guy who tears it up in the Moto GP circuit and at one point was rumored to be headed to Formula 1 and Ferrari? No, that’d be Valentino Rossi.

To say that Alexander Rossi’s victory is a bit of a surprise would be like stating that Donald Trump’s emergence as the Republican presidential candidate was certain to happen a year ago. The basic way to sum things up is to say: didn’t see that coming.

It’s not like Rossi is not an experienced driver. He’s not some fresh faced wonderboy that just jumped into the car and with no knowledge of what he’s doing. Like many others, he has extensive time behind the wheel, racing in the BMW series, in GP2, and even a few races in F1. But ovals, yeah, that’s a different story.

That’s the main reason that Rossi’s victory is a bit shocking is that other than racing at Phoenix this year, his oval acumen can be rated novice, at best. Perhaps that’s one of the reasons that his story seemed to fall of the front pages rather quickly. In what should be a feel-good amazing against-the-odds story, it has instead been marginalized by the fact that Rossi did not claim the win in fantastic fashion, or that he’s not one of the ‘name’ drivers, or that people just don’t seem to really know who the hell he is.

To casual fans, there’s nothing that brings excitement about Rossi crossing the line first, other than those fans who felt that the Indy 500 should be won by an American. That many people felt this aspect should be an aspect of the race is another story. To race fans, the Rossi name is known but like one that bounces about with a familiarity but no real connection, like that restaurant down the street that you’ve probably heard of but have never actually gone to.

So what to make of the win. Some of the articles have been perplexing. Ryan McGee of ESPN took a defensive tone, claiming that many fans felt the end of the 500 was underwhelming and the the victory uninspiring. Anne Proffit, over at Motorsports.com, could go only so far as to call Rossi composed but offered little in the way of true excitement or anything that would feel like a barbaric yawp. The same site made sure to mention that Josef Newgarden felt cheated by the race because the drivers did not get a chance to scrap it out at the end for the trophy. That’s too bad Mr. Newgarden, perhaps you and your team should have figured out a different strategy, maybe one that didn’t force you to pit with five laps remaining. But hey, there’s no surprise that a driver who finished third at the biggest race in the world would feel a little bitter toward the outcome.

The truth is, the race was an entertaining and rather fascinating one. Who would have expected Juan Pablo Montoya, last year’s winner, to crash out early; that the cars running at the top of the order for the first half of the race, Ryan Hunter-Reay, Townsend Bell, and Helio Castroneves, would all see their days ruined; that the mega-teams of Penske and Ganassi would struggle so much from an overall perspective? That’s how racing goes – there’s little in the way of guarantees and strange things can happen.

Watching Rossi cross the line powered by fumes is proof of these notions.

The question that surrounds Rossi at this point is where does he go from here? His IndyCar car is in its incipience but he’s done little thus far to indicate that he’s a superstar in the making. That the team he drives for, Andretti, has looked lackluster overall hasn’t helped. To further cloud speculation, Rossi continues to say that F1 is where he wants to be.

And there, possibly, is a bit of the rub. For as much as Rossi may be an American and could find a home in the IndyCar series, there’s something that feels like he’s not long for staying and that he’s got an eye toward Europe. That his name encourages people to think he’s Italian just adds to the peculiar mix.

Though he drives for Andretti, he’s still technically a reserve driver for Manor. He lost his seat because the Indonesian government was willing to sponsor their driver, Rio Haryanto, for the first 11 races of the F1 season. Now with the Indy 500 win, Manor will likely feel pressure to pull Rossi back to the team, especially as they can use his marketability to help sure their own financial issues.

Is that where this is headed? Is the Indy 500 winner soon to become a name lost on the wind, sometimes heard but often forgotten? A young driver with talent struggling to find the right spot to fit in? Is one world better than the other?

The fact that these are the questions surrounding Rossi just proves how much he has to deal with and how even grand moments, like earning his first IndyCar win, are fleeting. Huston Ladner/Frontstretch